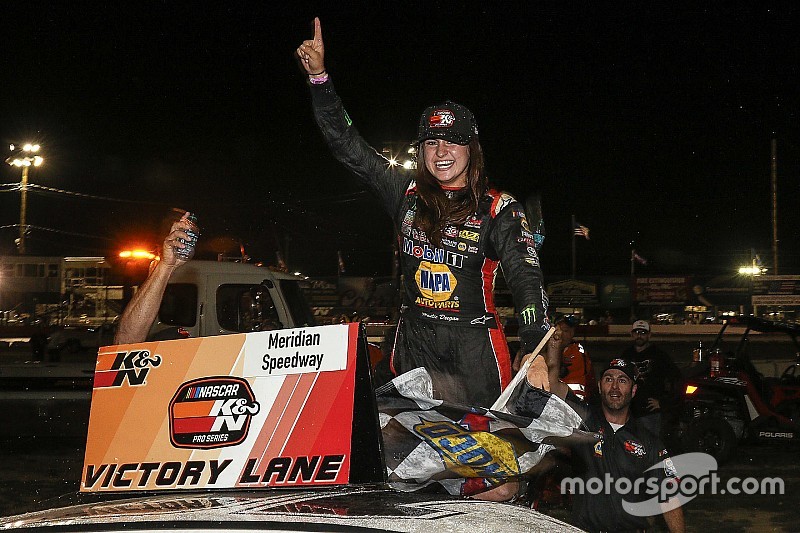 Hailie Deegan had already been turning heads in NASCAR, now she’s made history.

Deegan’s win in Saturday night’s NASCAR K&N Pro Series West race at Meridian Speedway in Idaho was the first of her career and first by a female in series history.

The only other woman to win in a NASCAR series was Shawna Robinson, who earned three wins in the now-defunct Dash Series, most recently in 1989.

“Oh my god,” Deegan, 17, said in Victory Lane after the race. “This has to be the best day of my life right here. It doesn’t get any better than this.

“People don’t understand how many days, how many hours I’ve put into this. How much work I’ve done to get to this moment. It’s just amazing. This is the happiest day of my life.

The win didn’t come without drama.

Deegan was trailing leader and Bill McAnally Racing teammate Cole Rouse beginning the final lap, when the two raced into Turn 1 for the lead. Deegan got into Rouse and nudged him aside to make the pass for the lead and the win.

“I knew what exactly I had to do there. I was doing it to some other people just getting right under them to get them a little light to get them, not wrecking loose, nothing crazy, but enough to just get a little under them and make the pass happen,” she said.

“I knew exactly what I had to do the last lap. I did it, we executed, and we made it happen.”

Rouse was not pleased with finishing second.

“We were going into Turn 1 and she doesn’t lift and drives into me, gets me completely sideways,” Rouse said. “We were going to win that race if it was run clean, but unfortunately it wasn’t.”

At the Las Vegas dirt race two weeks ago, Deegan became the first female to win a pole in the series and capped the evening with a then-career best second. She now sits fifth in the West series standings with two races remaining in the 2018 season.

Deegan grew up racing off-road and on dirt but transitioned to competing on asphalt in 2016 to pursue a career in stock car racing. She is the daughter of Brian Deegan, a motocross rider, off-road racer, and former X Games athlete.