Hendrick Motorsports' lost family and team members on Sunday when their privately owned airplane crashed as they were flying to Martinsville for today's race. 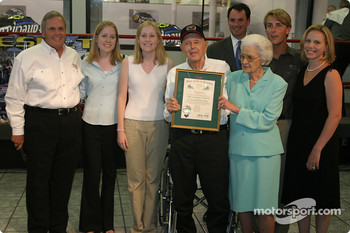 Papa Joe Hendrick award event: Papa Joe and Mary T. Hendrick with the Order of the Long Leaf Pine and their family.
Photo by Eric Gilbert.
Ricky Hendrick, son of NASCAR Nextel Cup team owner, Rick Hendrick, was one of the ten fatalities. Other family members included the senior Hendrick's brother John, President of Henderick Motorsports, and both of John's twin daughters, Kimberley and Jennifer.

Others on board the aircraft were Joe Jackson, Jeff Turner, Randy Dorton, Scott Lathum and the two pilots, Dick Tracy and Liz Morrison.

The Beechcraft 200 crashed in the Bull Mountain region of Virginia at approximately 11:45 a.m. ET, according to the Federal Aviation Administration. The conditions in the surrounding area at the time were reported as cloudy with mist and poor visibility due to fog conditions.

Ricky Henderick, 24, a former Busch series and NCTS driver until his retirement at an early age due to a race-related injury, was being groomed to eventually take over the family business; this season he was the team owner of the No. 5 Busch Series car driven by Kyle Busch.

Hendrick is one of the premier Motorsports racing organizations in NASCAR, having earned five Cup series titles, three Truck crowns and one Busch title.

The news broke during Sunday's race that the plane was missing. However, FAA did not confirm the incident until 5:13 p.m. ET, as the Cup race ended.

Hendrick Motorsports, along with NASCAR officials, held any official statement until after the race had ended and confirmation of the passenger list had been received. The passenger list was not released until close to 5:30 p.m.

Jeff Gordon, Jimmie Johnson, Terry Labonte and Brian Vickers are the drivers for the Hendrick Motorsports stable. All four were competing today in the Nextel Cup race at Martinsville. Johnson took the win in today's race, and, along with his three teammates, was told about the crash after the checkered flag.

Jim Hunter, NASCAR Vice President of Communications announced to the NASCAR teams and officials that there would not be a victory lane celebration prior to the final lap. The four drivers were escorted to the NASCAR trailer where they were informed of the tragedy.

Hendrick Motorsports, which is marking its twentieth year, lost the family's patriarch "Papa-Joe" earlier this year.

At this time, the NASCAR community and the Henderick family, including their drivers, are in shock as they mourn the loss of their loved ones and friends.

For those who would like to pay a tribute to the family and team, the charity of Hendrick Motorsports is the Bone Marrow foundation. Donations may be made at: