After failing a third substance abuse test, driver Shane Hmiel has been banned for life by the National Association of Stock Car Auto Racing. Hmiel was first suspended in 2003 for failing a random drug test; he completed a rehabilitation program and ...

After failing a third substance abuse test, driver Shane Hmiel has been banned for life by the National Association of Stock Car Auto Racing. Hmiel was first suspended in 2003 for failing a random drug test; he completed a rehabilitation program and was reinstated in 2004.

But his sobriety didn't last long. 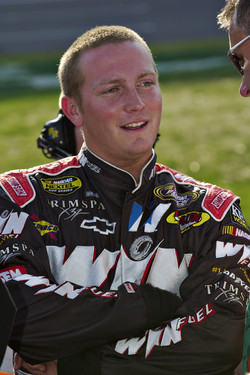 Shane Hmiel.
Photo by Kurt Dahlstrom.
Last fall, at Dover, Hmiel was acting erratically, prompting NASCAR to subject him to a random drug test. The 26-year-old son of former crew chief Steve Hmiel was ejected from that race track and suspended after the test came back positive.

Hmiel was working towards a reinstatement in 2007 by following strict guidelines NASCAR had mandated he follow. They included rehab, psychological reviews and random drug tests.

It was during one of those tests that Hmiel's results came back positive, prompting the lifetime ban. The young driver had been running the USAC circuit attempting to revive his struggling racing career.

Hmiel made seven Nextel Cup starts, 83 Busch Series starts and 29 Craftsman Truck Series starts. Despite his promise, he has just one win which came at Las Vegas in the truck series.

Hmiel has long been rumored by garage insiders to have a 'crystal meth' habit - the most powerful form of illegal speed. It is known to cause depression, anxiety, delusions and psychosis with long term use.

Crystal Meth is a very pure, smokeable form of methamphetamine. It is an extremely addictive stimulant and causes excessive anger in its users. It was some of Hmiel's sketchy behavior and outbursts on the race track that raised red flags for people in the NASCAR garage.

After an incident on track last year at Bristol with Dale Jarrett, Hmiel gave a TV interview where he was slurring his speech, stepping on his words and highly erratic.

The conservation of energy in IndyCar