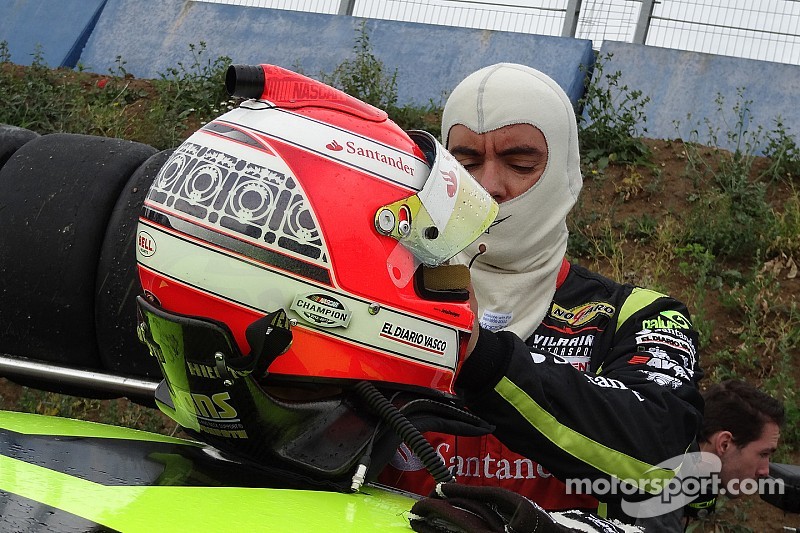 Gabillon gets solid finish, Vilarino couldn’t compete due to an accident in practice.

It was a tough day for Frederic Gabillon and Ander Vilarino (in photo above) in their NASCAR K&N Pro Series East road course debut at Watkins Glen, but both showed some true grit in Upstate New York. Facing some troubles with their cars, the 2013 Championship runner-up brought home a solid 12th place, while the Spaniard couldn’t take the green flag because of an accident in practice.

With very few laps completed in Free Practice and fuel-pickup related issues that couldn’t be solved in the short time between sessions hampering his qualifying effort and relegating him in 26th position on the grid, Gabillon had to resort to smart tactic and patience to make the most out of a complicated day, proving the solid base NASCAR Whelen Euro Series gives to his drivers. The Frenchman started from the back of the field due to last-minute adjustments on his car and took good care of his equipment in the first half of the race, but when things got harder in the final stages of the Bully Hill Vineyards 125 he took advantage of the last two restarts to climb up to the 12th position under the checkered flag.

“Man it was tough! We had troubles with the car immediately and lost a lot of time in the first laps, but we didn’t give up, we preserved the brakes in the first half and we made some good restarts in the end that gave us a good result. It was hard but it was real fun. I think I was even in the top-10 at some point,” said the 38-year-old from Uzès. “Overall it was a great experience tough and Troy William Racing worked very hard for me. Result was not bad, but could have been better if we just had time enough to fix the issue and I’d like to come back next year to have another shot”.

Ander Vilarino couldn’t take part in the race won by Scott Heckert because of the damage his #12 car sustained when the Spaniard spun in the last corner during the final practice session. Vilarino lost control just after posting his fastest lap and hit the barriers with the right rear. Despite the relatively low speed of the impact, the car couldn’t be repaired and Ander had to retire.

“I made a mistake and I’m really sorry both for the NASCAR Whelen Euro Series organization that gave me this prize and for Troy Williams Racing, which worked very hard on the car,” said the 34-year-old Hondarribia native, whose participation in the Bully Hill Vineyards 125 was the prize for his 2013 title. “We had difficulties all day long finding the right adjustments with the restrictor plates and I wanted to go faster so bad that I tried to compensate by braking later and driving on the limit. I ended up spinning in the last corner and hitting the barrier just hard enough that it couldn’t be repaired. It’s a shame. Now I will try to win the Championship again and have another chance next year”.

Both Gabillon and Vilarino will now head back to Europe to focus on the NASCAR Whelen Euro Series playoffs, beginning in Italy – at the Autodromo dell’Umbria di Magione – on September 20-21. Summer is not over for NWES drivers though, because 3 of them will race tonight at Bowman Gray Stadium: Guillaume Rousseau, 2013 Challenger Trophy winner, in the Modified division, 16-year-old Ulysse Delsaux and 15-year-old Guillaume Deflandre, both NWES development program member, in the Sportsman division.

Custer comes up short in bid to win at Watkins Glen

Weird and whacky cautions in NASCAR