James H. Hunter was not only a legend in National Association for Stock Car Auto Racing, he was a man who added his own vision to the sanctioning body and the many series that are part of the reason the name "NASCAR" is a well-known brand. Hunter was a key element to the growth of NASCAR, not only in America but spreading up to Canada and then worldwide. 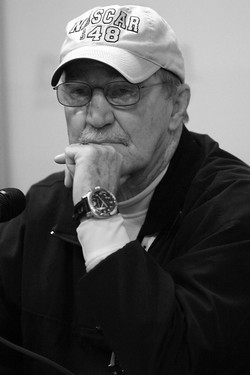 This morning NASCAR announced that Hunter, who had been fighting a battle with cancer, had died at the age of 71. At the time of his death, he still held the title Vice President of Corporate Communications, a title that he not only deserved but one that saw him open doors to the brand name circling around the world with the press corps and the articles they wrote on the series and thee stories race events.

"Jim Hunter was one of NASCAR's giants," said NASCAR Chairman and CEO Brian France. "For more than 40 years Jim was part of NASCAR and its history. He loved the sport, but loved the people even more. It seems as if everyone in the sport called him a friend. Jim will forever be missed by the NASCAR community. Our sympathies go out to his entire family."

In the past, the media covering the NASCAR series' mainly focused on the premier series, now known as the Sprint Cup Series, and only in the top cities in the United States. Hunter was one of them. Hailing from Darlington, South Carolina. Hunter was known for his smile and his sharing a good story. The University of South Carolina's student was himself active in sports and even though he hung up his baseball and football shoes, Hunter became a top-notch reporter who focused on motor sports.

Before joining NASCAR in 1983 as NASCAR's vice president of administration, Hunter was a sports editor for the Columbia Record newspaper. Later he wrote for one of the top Atlanta newspapers and for Stock Car magazine. Hunter also had a tour as a public relations representative, including with Dodge and several Indy car drivers.

He upped his PR work when he landed as the Public Relations Director for the for his home track: Darlington Raceway. He later moved to the same position at Talladega Superspeedway -- the track that is hosting this weekend's NASCAR races.

"Quite honestly, I don't know what to say about Jim Hunter that would even begin to describe him. He was just a larger than life figure in our sport," said Grant Lynch, Chairman of Talladega Superspeedway. "It wasn't because he sought the spotlight either, but because he was genuine and real. He was someone that people wanted to gravitate to, even if for only a moment. He was a great friend to Talladega dating back to before his time as our Public Relations Director.

"Our thoughts are with our friends at Darlington Raceway where Jim spent much of his career strengthening the bond between track and community. It's because of those experiences I know he'd want us to put our best foot forward and provide a great experience for our fans this weekend. It's going to be with incredibly heavy hearts that we move forward with our race preparations, but I know it's what Jim would want and expect. Our deepest sympathies go out to his wife Ann, his son Scott, daughter Amy and the entire NASCAR community as we all cope with the loss of a great man." 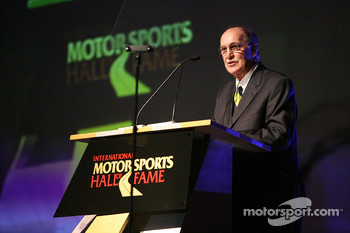 Jim Hunter at the 2009 International Motorsports Hall of Fame.
Photo by Getty Images.

Even though Hunter was busy, he still had time to write books and win awards. In his past time, he loved to play a good game of golf so the sportsman in him from his youth did continue, just mainly on the links.

His career path at NASCAR took him back home to Darlingon Raceway as president in 1993 and at during the same timeframe was a vice-president of the International Speedway Corporation -- the tracks owned under the NASCAR corporation's umbrella.

"Jim Hunter was one of the most charismatic people in NASCAR," said current Darlington Raceway President, Chris Browning. "I always enjoyed seeing Hunter at the track and particularly enjoyed his participation in our 2009 historic racing festival. It was great seeing Jim joke and swap old stories with some of the true pioneers of NASCAR. Everyone at Darlington Raceway will certainly miss Jim's smile, stories and laugh. Our thoughts and prayers go out to his family during this difficult time."

In 2001, Hunter returned to Daytona Beach to accept a new position the late Bill France Jr., who was NASCAR's CEO at the time. At the time, Hunter took on an challenge of dealing with the media coverage.

With his past experience, Hunter knew what was needed to get the news out to the media by working with the press and listening to their needs. He was always cordial and a true gentleman in all of his dealings with the media. From only major series coverage to the new media coverage, Hunter was the driving force. The gap between NASCAR and the media was narrowed due to his knowledge of both sides of the table.

Thanks to Hunter and his staff, the media centers are filled with reporters and photographers from across the world, not just those who reside in America.

He also had the respect of the drivers and team owners as Tony Stewart said, "When it comes to my NASCAR career, one of my biggest influences was Jim Hunter. There's no playbook or manual when you eventually reach this level, and understanding all the things that come along with being a driver in the NASCAR Sprint Cup Series can be overwhelming. At least, it was for me when I first got here. Jim became a great friend to me because he helped me understand why things were the way they were and how I could better handle situations. Knowing that his knowledge and experience will no longer be available to other young drivers as they enter the sport is proof that Jim is irreplaceable.

"I'm proud to have known Jim Hunter, proud to have been his friend and will miss him a lot. Our thoughts are with his wife, Ann, and their family," added Stewart.

Hunter was truly a legend and for a man who did not seek out the spotlight but one who truly enjoyed the work he did throughout his career, "legend" would not have been a word he would have used on himself.

Rest in Peace, Mr. Hunter, you sill be missed.

Motorsport.com extends their sympathy to the family of Jim Hunter, to the NASCAR staff, teams and drives and to his many friends.