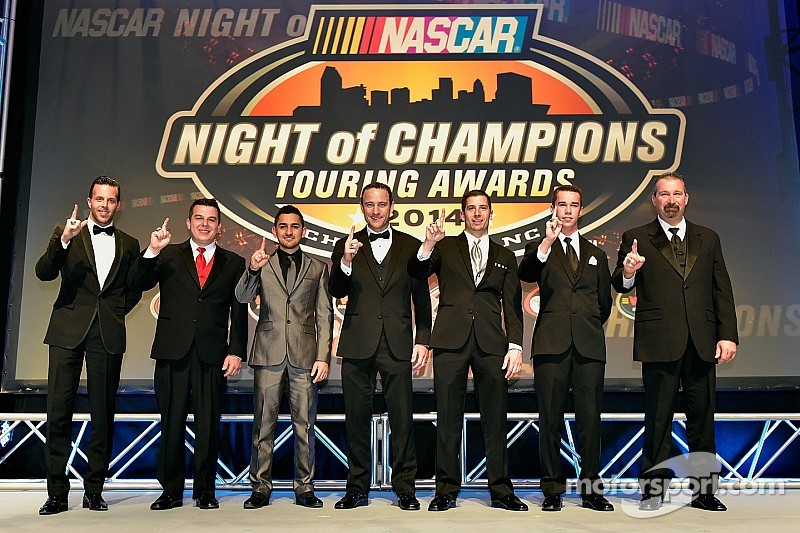 Top performers of 2014 celebrated at NASCAR Hall Of Fame

CHARLOTTE, N.C. (Dec. 13, 2014) — The culmination and coronation of a season-long – and career-defining – road to NASCAR glory came Saturday night for seven drivers.

Abraham Calderón summed it up the best on stage at the NASCAR Touring Series Night of Champions.

“This championship was a dream a few years ago,” said the 26-year-old Monterrey, Mexico driver as he accepted the NASCAR Mexico Toyota Series title. “It was really hard. But now that it’s real, it’s way better than I could ever imagine.”

Everybody knows that most championship stories have a bump along the way,

The individual high-point of the evening for each of the drivers came on the stage at the Crown Ballroom of the Charlotte Convention Center at the NASCAR Hall of Fame, when NASCAR President Mike Helton handed out the prestigious championship rings and awarded the series championship trophies.

“Tonight, the past, the present and future all converge,” said George Silbermann, NASCAR vice president of regional touring and weekly racing. “The past, celebrated through the storied history of many of these series. The present, represented by a mixture of seasoned veterans winning another NASCAR championship and young guns winning their first. And most importantly, the future, drivers recognized on this stage in the past few years are already having a huge impact in NASCAR’s three national series. And given the talent tonight, that trend will definitely continue.”

For a European race driver, a NASCAR championship seemed like an impossible goal,

Coby and Pursley each won their second touring series titles, while the other five are all first-time winners.

For Pursley, the championship was the crowning achievement on a long and storied career that also included a NASCAR Whelen All-American Series national title and 20 NASCAR K&N Pro Series West wins in 99 starts.

“For a European race driver, a NASCAR championship seemed like an impossible goal,” said Anthony Kumpen.

Kumpen won his championship by one point over two-time titlist Ander Vilarino, while Rhodes clinched his with a race remaining in the season. Seuss, Coby and Pursley all staked themselves to early season leads and held off their challengers. Dumoulin used a stretch of five consecutive podium finishes in the summer months to lock up the top spot, while Calderón emerged victorious in the series’ five-race Desafio.

“Everybody knows that most championship stories have a bump along the way,” said Coby, who became just the fifth different driver in 30 years of the Whelen Modified Tour to earn multiple championships. “We just did our thing and took care of business at each race.

Said Seuss: “One fact I'll always point to about this championship is we completed every lap but one. That's a testament to the team we have working on this car in the shop and at the track. This is a team sport and I couldn't do it without all of you.”

The championship car owners and crew chiefs were also recognized Saturday night. The champions weren't the only ones to pick up hardware.

The top-10 drivers and car owners from each of NASCAR's touring series also were recognized during the gala.

Retro: Why this Lotus 72 was Piola’s “most important” F1 drawing