CHARLOTTE, NC (October 31, 2011)--It is with great sorrow that the Wallace family announces the passing of its patriarch, Russell "Russ" William Wallace, Sr., on October 30, 2011 at Charlotte's Carolinas Medical Center. He was 77 years of age. 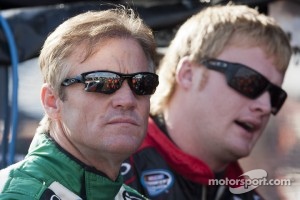 Wallace, a determined auto racer, scored over 400 feature race victories on Midwestern short tracks in the 1960s and 1970s, making him one of the region's most feared drivers of the time. He eventually spawned what has become one of racing's most well-known families, including three winners in NASCAR's National Series: Rusty, Mike and Kenny Wallace.

In February, 2011, Russ Wallace's family became the first in NASCAR history to have produced four Daytona 500 competitors. When grandson Steve Wallace qualified for the February event, he broke a longtime tie with the Petty, Allison, Earnhardt and Bodine families.

He is also survived by brother Gary Wallace and wife Jane, as well as nine grandchildren: Greg, Katie, Lindsey Wallace Van Wingerden and husband Thomas, Brooke, Stephen, Chrissy, Brandy, Brittany and Matt. He was preceded in death by his grandson Michael Wallace, Jr.

In lieu of flowers, memorials to Russ Wallace may be made online to the USO or to Victory Junction Gang Camp, 4500 Adam's Way, Randleman, NC 27317.

The family will receive members of the racing community and other invited friends at Grace Covenant Church in Cornelius, NC on Monday, November 7, 2011, from 4-8 PM. The family will also receive friends on Tuesday, November 8, 2011 from 12-3 PM at Schrader's Funeral Home in Ballwin, MO.