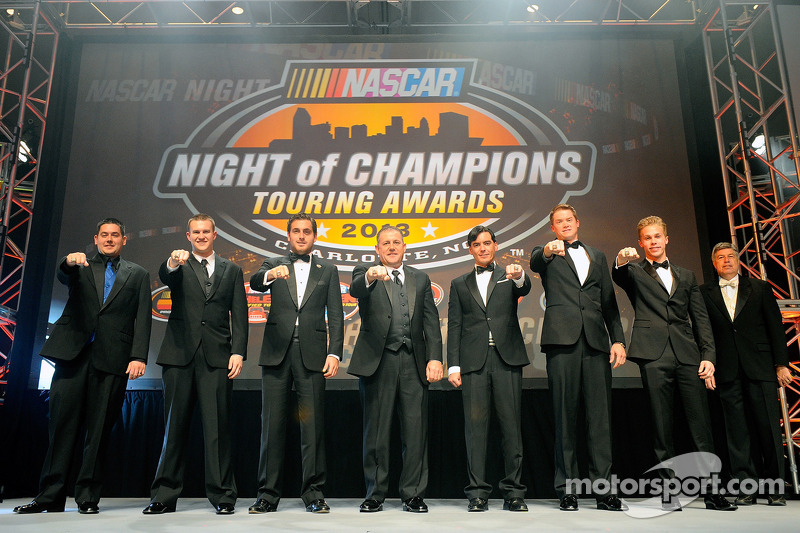 Top performers of 2013 celebrate at NASCAR Hall Of Fame

CHARLOTTE, N.C. (Dec. 14, 2013) – NASCAR’s future was celebrated within the walls that houses its history Saturday evening as seven champions in NASCAR’s touring series were honored at the Night of Champions Touring Awards at the Charlotte Convention Center at the NASCAR Hall of Fame.

The ceremony featured the champions representing four different countries and top drivers from the regional touring series in North America and Europe, who gathered for the special year-end event.

Kwasniewski, of Las Vegas, at just 18 years of age continued his assault on the record books by becoming the first driver to capture both K&N Pro Series East and K&N Pro Series West titles.

Steckly, of Milverton, Ontario, Canada, claimed his third series crown in six seasons on the power of four race wins.

Peralta, of Querétaro, Mexico, scored his first series title in his first full season of competition.

Vilariño, of San Sebastián, Spain, won his second championship on the strength of seven victories.

Preece, of Berlin, Conn., at 22, became the youngest Whelen Modified Tour champion in its 29-year history.

“The drivers who graced the stage truly reflect the depth, talent and diversity of NASCAR in the 21st century,” said George Silbermann, NASCAR vice president, regional and touring series. “And the seven NASCAR champions who were crowned embody the strength and future promise of our sport.”

Talented, young drivers have made their mark on each of the touring series and many were on hand to collect many of the awards presented.

“There are a lot of young faces here tonight that you will probably be seeing a lot more of in the future,” continued Silbermann. “They are the new ambassadors of our sport – fearless and very talented on the racetrack and eager to prove their mettle.”

In addition to the championship awards, each series rookie of the year was honored. The Sunoco Rookie of the Year Award winners were Jesse Little in the K&N Pro Series East, Dylan Lupton in the K&N Pro Series West, Cole Powell in the Whelen Modified Tour and Luke Fleming in the Whelen Southern Modified Tour. Top rookie performers in three international series were Alex Guenette in the Canadian Tire Series, Santiago Tovar in Mexico’s Toyota Series and Yann Zimmer in the Euro Series.

The top-10 drivers and car owners from each of NASCAR’s touring series also were recognized during the gala event – which featured Mike Joy, Dr. Dick Berggren and Monica Palumbo from Fox Sports as co-hosts. The musical entertainment was provided by 3 Doors Down front man Brad Arnold. The awards ceremony was streamed live online at NASCARHomeTracks.com – the official online home of NASCAR’s touring series – in English, French and Spanish.

The celebration capped a week of festivities in the Charlotte area aimed at providing the top drivers and track operators in NASCAR’s weekly and touring series an up close and personal look at the hub of stock-car racing. The NASCAR Whelen All-American Series Awards Banquet on Friday honored champions from across North America in the series that is NASCAR’s grassroots foundation.

An open letter to Alonso: Why you should swap F1 for IndyCar