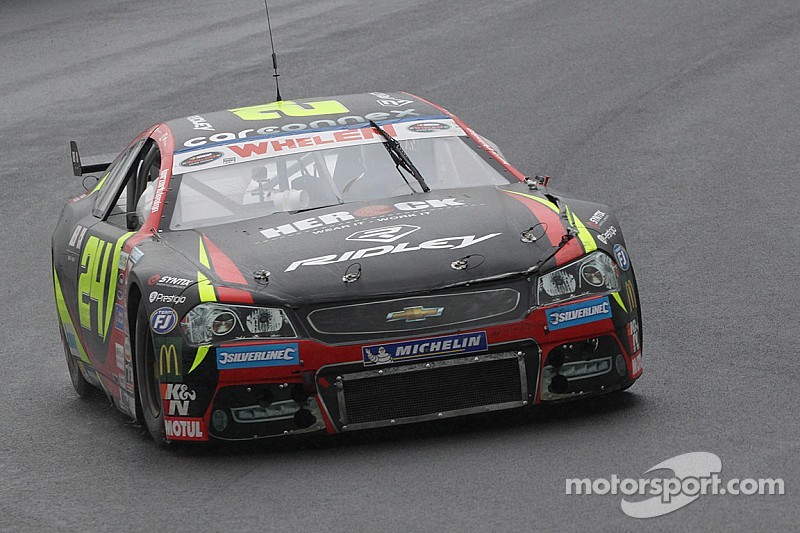 The final race of the NASCAR Whelen Euro Series season crowned Anthony Kumpen (#24 PK Carsport Chevrolet SS, in photo) as the 2014 ELITE 1 Division champion by just one point on Ander Vilarino (#2 TFT-Banco Santander Chevrolet SS) and highlighted once again the strength of Eddie Cheever III (#51 CAAL Racing Chevrolet SS), who dominated at the Circuit Bugatti en route to his third win of the season and a clear success in the Jerome Sarran Trophy.

Kumpen conquered the title in his first NASCAR season by finishing second in the ELITE 1 Sunday Race, two positions ahead of Vilarino, and overturning the gap he had before the green flag.

“It’s fantastic to win the Championship in our first year with a new project. I looked at NASCAR for all my life and now that NASCAR is in Europe, to be the NASCAR Whelen Euro Series Champion is a dream come true,” said Kumpen, who never finished outside the top-10 during the season and amassed 1 Win and 10 top-5s. “Today it was the first time I drove the car in the rain on a road course. It was difficult but we made an outstanding job. I want to thank my fantastic team, NASCAR, the organization, Whelen Engineering and all the sponsors. I’m so happy to be in this Series and I’ll be back next year to go for title again!”

Vilarino started from the pole and took the bonus points for leading the first lap – completed behind the safety car due to a track still wet after a morning shower – but Cheever took the lead as the green flag waved and immediately drove away from the rest of the field, leaving the two title contenders in second and third, with Vilarino ahead of Kumpen. The Belgian made his move at La Chapelle on lap 5 and started chasing down the leader. In the same lap, Vilarino lost another position to Frederic Gabillon (#12 Still Racing Chevrolet Camaro) and the championship with it. The Spaniard tried to fight back, but ended up fourth under the checkered flag, behind Cheever, Kumpen and Gabillon.

“ I’m really satisfied for today’s victory because it came on a wet track that made the car really challenging to drive,” said Cheever, who in the final stages saw Kumpen getting closer, but took the checkered flag with a one second advantage and ended up third in the standings. “To be third in points, win three races and get the Jerome Sarran Trophy in my first NASCAR season is a huge achievement.”

Action on the last lap

Champions and Trophy winners will be honored on December 13 in Charlotte, at the NASCAR Hall of Fame / Charlotte Convention Center, in the contest of the NASCAR Night of Champions Touring Awards.

Drive for Diversity candidates try to get NASCAR career on track