DAYTONA BEACH, Fla. (April 10, 2013) — Larger than life figures who built NASCAR lap by lap and bolt by bolt from the post-World War II era into the 21st century comprise the 25 nominees for the NASCAR Hall of Fame Class of 2014.

NASCAR today announced those 25 nominees for the NASCAR Hall of Fame’s fifth induction class, and included among the diverse group are five newcomers whose achievements are cornerstones of the sport’s origins and continue to fuel its growth in contemporary times. 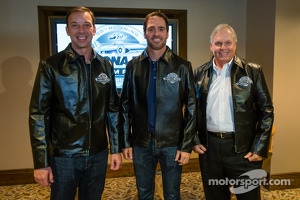 This round of nominees was selected by a 21-person Nominating Committee consisting of representatives from NASCAR, the NASCAR Hall of Fame and track owners from both major facilities and historic short tracks. The committee’s votes were tabulated by accounting firm Ernst & Young.

The NASCAR Hall of Fame’s 2014 inductees will be determined by a 54-member Voting Panel, which includes the entire Nominating Committee, media members, manufacturer representatives, retired competitors (drivers, owners and crew chiefs) and recognized industry leaders. In addition, the fan vote will result in the Voting Panel’s final ballot. Fan voting on NASCAR.COM opens today, April 10 and closes May 21 at noon.

Following are the 25 nominees, listed alphabetically:

Anne Bledsoe France, helped build the sport with husband Bill France Sr. Affectionately known as "Annie B.," she is the first woman to be nominated for induction into the NASCAR Hall of Fame.

Wendell Scott, NASCAR trailblazer was the first African-American NASCAR premier (now Sprint Cup) series race winner, and first to be nominated for induction into the NASCAR Hall of Fame.