Pietro Fittipaldi aims for a NASCAR ride in his future

The youngest championship racer in the Fittipaldi family, Pietro Fittipaldi da Cruz, landed his maiden victory in the Limited Late Model race at Hickory Motor Speedway on July 23rd. Driving the No. 90 Lee Faulk Racing Chevrolet, Pietro Fittipaldi was the race leader from start to finish. The teenager built a gap while the top two contenders were in a battle for second place, allowing him to sail away with the win.

“It was a very deeply emotional feeling,” said young Fittipaldi about being first to cross the line and take the checkered flag. He was in front by one-half of the oval track but he said, “Even with my lead, I was still concentrating on racing and not thinking of the win as I not want to make a mistake. “ Spoken like a true racer and he is only 14 years old.

My main goal this year is to win the title!

In Pietro Fittipaldi’s exclusive interview with Motorsport.com, he reflected on the first time he ran a GoKart. “I was around 5 or 6 when I got into a GoKart but it was more for fun and it was not until I turned nine when I ran more practices and then became competitive.” And then he started to rack up the victories!

This year, he is working with one of the top development teams for young racers who aim to make it to the top rung in NASCAR. Pietro did three races last year but this is his first full season in the Limited Late Models competing at the North Carolina track knows for being the “Birthplace of NASCAR Stars”. It is where Pietro hopes to notch his second championship. His first title was in GoKart.

“At Hickory, we run 24 races and we now have nine more to finish out the season. I am now third in the points with the one win and five other podium finishes,” he said. “My main goal this year is to win the title!”

He also is preparing for his sophomore year in high school which could add more pressure but for Pietro, but already he has learned to balance the two and has in his plans in place. Pietro is currently an honor student with nearly a straight A’s. He explained that he “will speak to his teachers and ask them to allow him to do any make-up work”. Sounds easy but it is not as he commented that he will “need to speak to each teacher individually for permission” and he went on to say when he is not at the track, he does his school work in his hotel room.

What Pietro said about keeping up his school work at the same time he continues his racing career is a key element for success. It is a perfect way for him to hone his skills for a future in NASCAR. The top racers in the world need to balance their racing lives with their home lives, plus make special appearances for the series and for their sponsors.

Always willing to learn, he already has discovered the fine art of keeping up his assignments and grades while learning to also hone his skills as a race car driver. 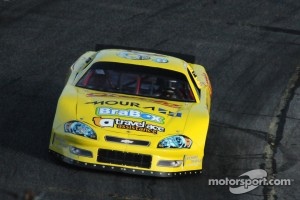 Pietro knows he wants to climb the ladder to the NASCAR ranks versus following in his Grandfather’s footsteps as an open-wheel racer. Emerson Fittipaldi is a Formula One World Champion and notched championships in other series as well but that was at a time when the race car driver did not drive cars with the fancy technology of today. Pietro placed the odds of his chances in both elements: open-wheel and stockcar racing. NASCAR won out.

“I follow Formula One but found NASCAR to be more competitive,” said Pietro. “In F1 the ratio is 80/20 with 80% being the team and only 20% is the driver and there are only two to three top teams in F1 so it really depends on the team. But in NASCAR it is a 50/50 ratio for the team and the driver and most of the teams are very competitive.”

Add to the above and one of his other ingredients in making his decision is Max Papis, who is married to Emerson’s daughter and therefore Pietro’s uncle. The two have an excellent relationship and even ran in the Florida Winter Tour racing GoKarts. While Papis switched from open-wheel to stockcars, Pietro feels his staying in only one element will be easier than his uncle who switched from one discipline to the other. “Max gives me good advice,” he said. “It helps me to talk to him.”

As to his future, Pietro already has his plans laid out but of course it all depends on how well he does over the time frame to reach his ultimate goal. Next year, he will stay in the Hickory Motor Speed way series but will also compete in the Southeast Division travel series for the Limited Late Models. The series consists of 10 races. While he could enter in the K&N Pro Series which is sanctioned by NASCAR at the age of 15, he wants more seat time.

He does hope to start moving up to the Pro Series East division at the age of 16, he will make that decision at that time. With his goal to reach NASCAR top tiers, he also realizes that he cannot do it without sponsors and one reason he stated that racing under the Fittipaldi name is a benefit. “It is good for marketing and to find sponsors,” he admitted. 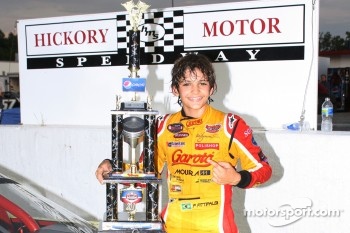 On the other side of the coin is the fact that there are competitors out there “who just want to beat me so they can say ‘they beat a Fittipaldi’.” However after taking his first stockcar series win, he hopes that his rivals now and in the future “will respect me for who I am as a driver now that I have won”.

On behalf of the young racer, he would like to take this opportunity to thank his team as they work with him and they are one of the top development teams in the business: Lee Faulk Racing.

Pietro wanted to thank the sponsors who are backing him and they are: Garoto, Jeronimo Da Veiga, Brabox, Baterias Moura, Travel Ace, Chevorlet and Goodyear.

Editor’s note:
On Saturday night, July 30, prior to the publishing of this special feature, Pietro Fittipaldi added another podium for the Hickory Motor Sports Limited Late Model series. The young racer did not want to finish third in Saturday's race so he gave chase to the second place car and got right up on his bumper. Pietro was able to make the pass stick to steal second place in a remarkable late race charge.

Racers Drive teams with Jessica Brunelli for her future

Indy winner Castroneves: “I’ve still got it, don’t you think?”

Race of my Life: Emerson Fittipaldi on the 1972 Italian GP