Rick Hendrick, his family and the Hendrick Motorsports organization are in the process of mourning the loss of their loved ones and friends who were on board the small Beech 200 plane that crashed on Sunday near Martinsville. The following is a ...

Rick Hendrick, his family and the Hendrick Motorsports organization are in the process of mourning the loss of their loved ones and friends who were on board the small Beech 200 plane that crashed on Sunday near Martinsville. The following is a brief glance at the life of the heir apparent, Ricky Hendrick.

Joseph Riddick "Ricky" Hendrick IV is the son of Hendrick Motorsports founder Rick Hendrick and a former race car driver. The younger generation driver followed in the path of his father, he began racing at the age of 15 and earned five wins in the Legends Series Summer Shootout. In 1996, he joined the Legends Summer Shoot-Out Series Semi-Pro Division where he enjoyed one victory and four top-five results. 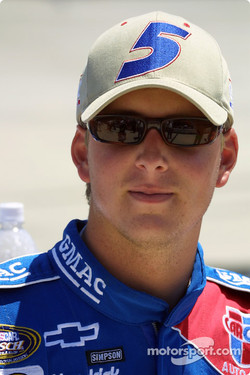 Ricky Hendrick.
Photo by Thomas Chemris.
By 1997, he graduated to the NASCAR Late Model Stock Series where his breakthrough season was 1998. Hendrick posted three wins and three poles. From there, he moved up to the Craftsman Truck Series where, at the age of 21, he won the inaugural race at Kansas Speedway, which at the time made him the youngest driver to ever win a NCTS race.

The next logical step was for Hendrick to go Busch Series racing, where he had scored two top-ten results before being injured in a crash at Las Vegas Motor Speedway. A shoulder injury suffered in the accident put him out of commission for six weeks.

When he finally returned to the No. 5 Chevy for a test at Atlanta, he was not the driver he used to be. Realizing he had lost his edge and his nerve, Hendrick retired at the age of 22.

His father then made Ricky the owner of the No. 5 Chevy and he promptly hired Brian Vickers to pilot it. In his first year as a car owner, he won the Busch Series title. When Vickers left the No. 5 car for the No. 25 Hendrick Nextel Cup team, Ricky was given an ownership chunk of that car as well.

When his dad and Uncle John started the Hendrick Motorsports Driver Development Program, it came as no surprise that the young man would be the primary person to find the talented drivers for the HMS program.

The young man was the image of his dad, not just in looks but in the way he dealt with life and with those he met. Hendrick learned from those with experience in the world of stock car racing; mainly from his father.

Hendrick Motorsports started a driver development program and due to his ability to spot young talent - Hendrick hired Vickers for the Busch series - it was only fitting that the younger Hendrick be put in charge of the program. Since then he had signed other several young up-and-coming drivers.

Joseph Riddick Hendrick IV, or Ricky as everyone called him, was born on April 2, 1980 he is survived by his father, Rick; mother Linda; and sister Lynn.

Schumacher: Vettel giving me lots of advice in good friendship