Rico Abreu gets up to speed 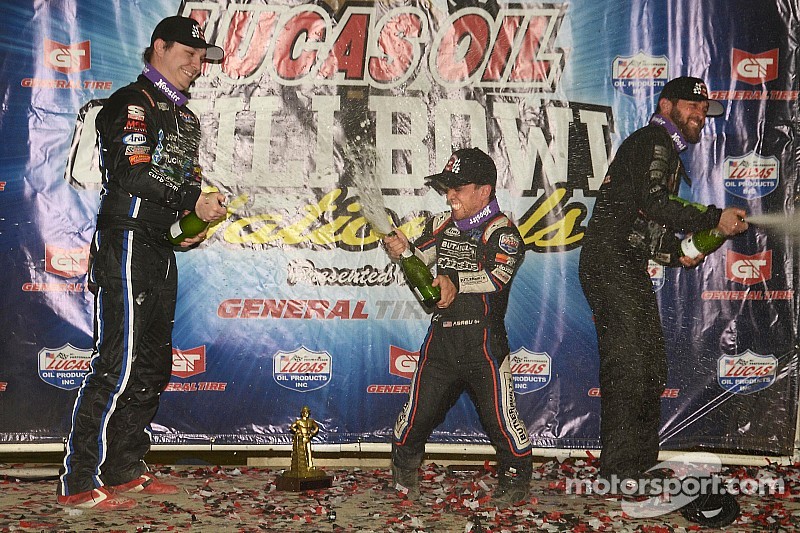 Chili Bowl winner has successful test at Motor Mile in preparation for his stock car debut.

Rico Abreu’s first laps in a stock car were around the parking lot at his new race shop in Mooresville, N.C. on Monday.

By late Tuesday afternoon, the 22-year-old USAC Midget and Chili Bowl Champion was matching the lap times (15.43-sec.) set by the pole sitters at the Motor Mile (Va.).

Abreu participated in his first test on pavement on the half-mile track where he shook down the Super Late Model car he’ll race on Saturday at the Pete Orr Memorial at New Smyrna (Fla.) Speedway.

Although the latest addition to the HScott Motorsports with Justin Marks K&N Pro Series East lineup has less than four weeks to prepare for his NASCAR debut, his new crew chief, Mardy Lindley, who raced competitively himself from 1993 to 2006, said Abreu's introduction to a stock car “went well”.

He blew my expectations away.

“He had no issues,” Linley told Motorsport.com. “He got right up to speed and he’s never been in a straight drive before. Of course, he was all by himself and he still needs to learn how to race with others but he blew my expectations away.”

Jumping into the deep end

There were a lot of firsts for Abreu on Tuesday, who experienced his first national teleconference with the NASCAR media to discuss his new opportunity to compete in the K&N Pro Series East tour with HScott Motorsports.

The people that I've surrounded myself with are phenomenal people, and I think that raises the bar and raises my confidence level and support.

“I think it's a big step, really,” Abreu said. “Just because I come from the open wheel world where everyone knows everyone.  And there are so many more NASCAR fans that don't follow dirt racing and don't know what I do, so I'm really looking forward to it.

“I think the fans will react a lot differently than the average driver -- average-looking driver coming to NASCAR.  I'm excited to see how it goes.  I think it's going to be just fine. I think I'm planning on having a lot of success.  The people that I've surrounded myself with are phenomenal people, and I think that raises the bar and raises my confidence level and support.”

As a child growing up in Rutherford, Calif., Abreu played sports and wrestled in middle school.  But as his peers' statures grew, he did not.

Abreu says his height limitations led him to stock car racing, first as a fan and eventually as a competitor.

“Well, I didn't even think I could race until I did it for the first time, let alone be so competitive so quickly in my career,” Abreu said.

Still, Abreu doesn’t consider his four-foot-four frame a disadvantage. While certain modifications had to be made to the stock car, such as a spacer behind his seat and the pedals and dashboard moved closer to Abreu so he can reach the instrumentation, the safety of the structure was not compromised in the process.

Abreu acknowledged, “I feel safe in the race car so I think that is the big first step.”

Nothing is way off the radar that they did and it's really safe.

“All the modifications are really simple.  Nothing is way off the radar that they did and it's really safe.  Everyone agreed with every decision and every modification they made.  So I'm really excited and really comfortable sitting in a car that I haven't even raced yet.”

Lindley won 11 races in the Pro Cup Series and was the track champion at Greenville Pickens Speedway. He led Dylan Kwasniewski to the K&N title in 2013 and will be there to assist Abreu through the transition from open wheel to stock cars.

Before Tuesday, Abreu had never used a radio in the car to communicate to his crew chief nor had he sat on the left side of the car. With sprints and midgets, the driver is centrally located in the cockpit. Lindley said that didn’t stop Abreu from “running right up against the wall” at Motor Mile, a track very similar to New Smyrna and the “perfect place to test”.

It’s not surprising to Lindley that Abreu’s style closely resembles his good friend Kyle Larson, who the fellow Californian considers “a brother” and someone he often turns to for advice.

“His parents really could be my mom and dad just how close we are or how close I am to his family and him,” Abreu said.

The Larson family has taken Abreu under its wing and structured his program similarly to Kyle’s. During Lindley’s evolution from driver to crew chief – and stints with Roush Fenway Racing, Richard Childress Racing – he worked with Larson at Rev Racing and acknowledged how gifted the Ganassi racer is behind the wheel.

“Kyle was always real smart,” Lindley said. “He knew how to race already by the time he came to the K&N Series. But Rico is smart, too. For the type of car he had today, he showed great car control and got up to speed fast. He’s going to be really good.”

Rising through the ranks

Abreu has already proved his prowess in the open wheel ranks. He’s collected 26 victories in 410 winged and non-winged sprint cars, 360 winged sprints and midgets throughout the U.S. and New Zealand. The affable Abreu’s rise in popularity stems as much from his personality as it does from his success on the track.

For his stock car debut this weekend at New Smyrna, Abreu says “the most important thing” is to be “comfortable” in his race car so he can just focus on racing. Abreu is scheduled to make his first K&N Pro Series East start on Feb. 15.

“I don't run into problems down the road where I'm not comfortable,” Abreu said. “Because you have to be a hundred percent in these race cars and you can't lose concentration when you're racing about being uncomfortable.  So that is my biggest thing about this weekend is just making sure I'm in my comfort zone and making sure everything's right and getting in as many laps as I can on the track.

“It's just so cool to have the feeling that people really believe in you and would like to see you achieve. Then let alone winning the Chili Bowl and all the prestigious races I got to win last year.  I think a lot of people believe in me, and it gives me a lot of confidence and humbles me.  So I'm glad that people can really see who I am and they don't judge me for what I look like or why I'm doing it.  I'm doing it because I'm a racer and I love the sport.”