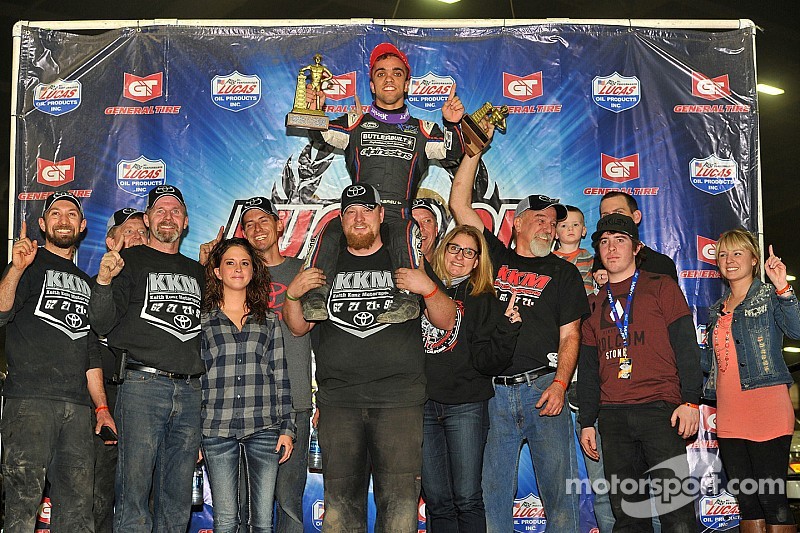 Midget Champion and Chili Bowl victor takes his next step towards stock cars.

Rico Abreu has signed with HScott Motorsports with Justin Marks to drive in the K&N Pro Series East in 2015.

The USAC National Midget champion, who is coming off of his first Chili Bowl Nationals victory on Saturday, will drive the No. 98 car with veteran K&N crew chief Mardy Lindley calling the shots.

"Joining HScott Motorsports with Justin Marks is a great opportunity for me," Abreu said in a release. "As a full-time open-wheel driver on dirt, I'm aware that there will be a learning curve for me this season.

“Knowing that Harry (Scott) and Justin (Marks) have faith in me to be successful in stock cars is a great confidence boost. I'm up for the challenge and look forward to learning from my teammates and making the most out of this season."

The 22-year-old Rutherford, Calif.-native competed in more than 100 open-wheel races last year and won 26 events in a variety of series including 410 winged and non-winged sprint cars, 360 winged sprints and USAC midgets throughout the U.S. and New Zealand.

"Rico has remarkable talent and is a great fit for this organization," said co-owner Harry Scott Jr. "The addition of Rico to our stout lineup of drivers raises our level of excitement even higher going into the 2015 season."

"Rico is a driver that has already proven to himself on so many levels in his young career," Marks said.  "I can't wait to see what Rico and his fellow teammates accomplish this year in the NASCAR K&N Pro Series East."

Taking the guesswork out of pit road

Rico Abreu gets up to speed