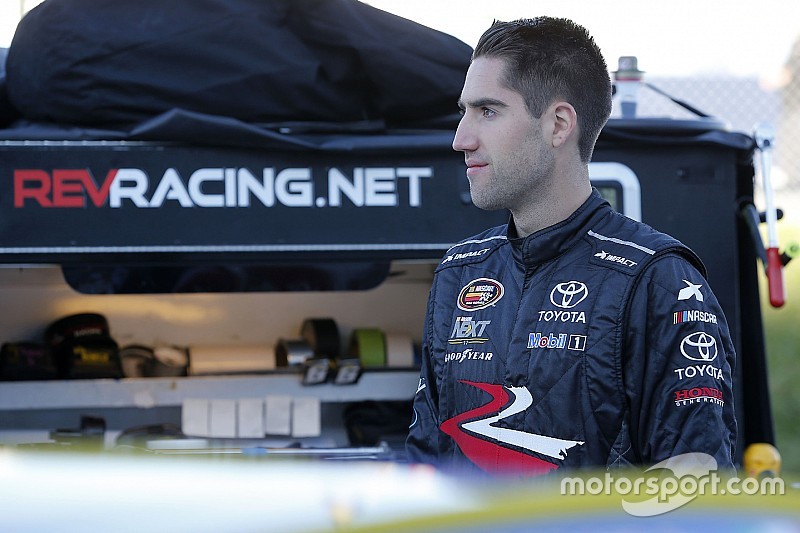 Fresh off of winning his second NASCAR PEAK Mexico Series championship, Ruben Garcia is ready for the 2019 season.

Garcia will once again be a part of the NASCAR Drive for Diversity Driver Development Program competing for Rev Racing.

The Mexico City native just finished his most successful season of NASCAR racing to date winning three times in Mexico to help him capture his second NASCAR PEAK Mexico Series title in three years and he also won twice in the NASCAR K&N Pro Series East in 2018.

Garcia finished third in the final standings in the top NASCAR developmental series in the United States for his best finish to date in the division.

“We have a really good year in the K&N Pro Series East with Rev Racing,” said Garcia. “We won two races and feel like there is even more to do.

“I'm definitely very excited and every year we’ve shown some progress and with the new tires we are using in the K&N Series and working with everyone at Rev Racing, we’re ready to go chase a championship.”

Garcia also feels his success from both series this season will only help him in 2019.

“All the momentum from my wins in Mexico and my two wins in the K&N Pro Series East and finishing third in the championship standings I think we’re more than ready to go chase a (K&N) championship.

“I think Rev Racing is ready (to win another title) and they’ve been working hard to get back to that and I think they are there now. They’re working even harder for the 2019 season

“We’re prepared to running for a championship and I’m ready to go for it.”

In addition to being selected by Rev Racing this week, Garcia also finished second in Guadalajara, Mexico, last Sunday to clinch the NASCAR PEAK Mexico Series title for the second time in the past three seasons.

After he won the first title in 2016, Gracia didn’t really know what to expect and this time he’s prepared to celebrate and appreciate this one even more.

“I remember the first time I won the championship. The first time I didn’t know what was going on what to say or expect. This time I know and I get to enjoy it more this time around,” he said.

“This is fun, I have this banquet this week and another one in Mexico with my team in January.

“It’s been a busy week. I feel like as soon as I got out of the car last weekend I had to start writing my speech for the banquet in Charlotte this week.”

The Mexico Series has split into two divisions - The Fed Ex Challenge and the NASCAR PEAK Mexico Series. And that has made winning a title in Mexico harder to win according to Garcia.

“The best cars with veteran drivers now race in the Peak Series and that’s made it much more competitive this year,” he said. “If you had a bad day you would finish farther back in the pack.”

The Fed Ex Challenge allows younger and rookie drivers a chance to compete and gain more experience and that has only made winning in the Peak Series harder according to Garcia and winning the title more gratifying.

“I really appreciate all the hard work my team and crew in Mexico (led by crew chief Martin Bautista) helping me win the championship,” said Garcia. “I look forward to celebrating the title here in Charlotte this week and then with my whole team in Mexico next month.”

Foyt to be inducted into Houston Sports Hall of Fame