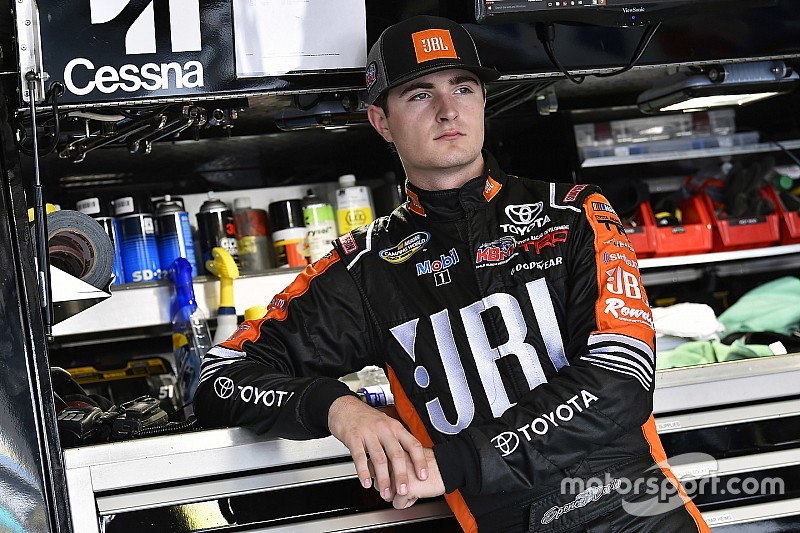 A Lap 2 shunt involving the Toyotas of Max McLaughlin, Tanner Gray and Ruben Garcia Jr. meant the next eight laps were run under yellow, and right after the restart, Trevor Huddleston’s Ford suffered major body rub after contact on the back straight, bringing the caution out again.

The second restart came at the end of lap 16, with Cabre maintaining the lead ahead of Davis and Mayer but Gilliland falling to fourth, just about staving off Deegan. Thereafter Deegan fell a second back but had a similar margin over Garrett.

Mayer drafted past Davis for second on Lap 26, but he was already 2.5sec down on Cabre.

The caution flew again on Lap 28 as Brittney Zamora brought her Toyota to a smoky halt at pit exit lane, apparently with engine failure.

The restart on Lap 35 saw Cabre retain the lead ahead of Mayer, while Gilliland started pressuring Davis for third which he grabbed on Lap 38, just a lap after Deegan had lost sixth to Derek Kraus in the NAPA Toyota. Kraus would move past Davis for fourth on Lap 44 but then almost immediately lose it again.

Mayer had no intention of letting Cabre escape, and while the pair pulled three seconds on Gilliland, they remained covered by just three tenths of a second until Mayer lost one second in one lap with an error.

It didn’t matter: the 47th lap saw the caution out again as Gray, who had returned to the fray at the rear of the field but on the lead lap, cut a tire and had to creep to pitlane.

On Lap 51, the race went green once more with Cabre escaping and Davis moving around Mayer for second but only for a lap. Behind this trio, Deegan grabbed fourth ahead of Gilliland and Kraus, but had to give way to Gilliland on Lap 56 and soon Kraus was pressuring her too.

She was still holding on when the red flew on Lap 67 for the halfway break to allow pitstops. Sadly for Cabre, the evening’s dominant driver, he couldn’t get restarted and then when he was bumpstarted, his car halted again on the warm-up lane and he was pushed back around the track and into pitlane once more.

Mayer, gifted the lead, ran with it, quickly dropping Davis, Gilliland, Deegan, Kraus and Garrett. Now re-entering the frame was Garcia Jr., recovered from his delay in the Lap 1 incident and now up to seventh.

Deegan moved past Gilliland for third on Lap 77, but he re-passed three laps later and Deegan’s lost momentum allowed Kraus to close up and push her wide and cut down her left-rear tire. She then half-spun on her way to the pits, bringing out the yellow once more. She would rejoin 12th, a lap down, but ahead of Cabre who was now seven laps down.

The Lap 85 restart saw Mayer leading Davis, Kraus, Gilliland, Parker Retzlaff’s Toyota and Garrett. Then Josh Fanopolous appeared to have a major mechanical failure that saw him pull off the track but brought out the yellow on Lap 93.

The final sprint to the checkers saw Spencer Davis jump into the lead ahead of Mayer and cross the finish line 0.173sec ahead, with Kraus holding onto third ahead of Gilliland and Retzlaff claiming fifth. Garcia’s recovery drive netted sixth.