Two in a row for Scott Heckert 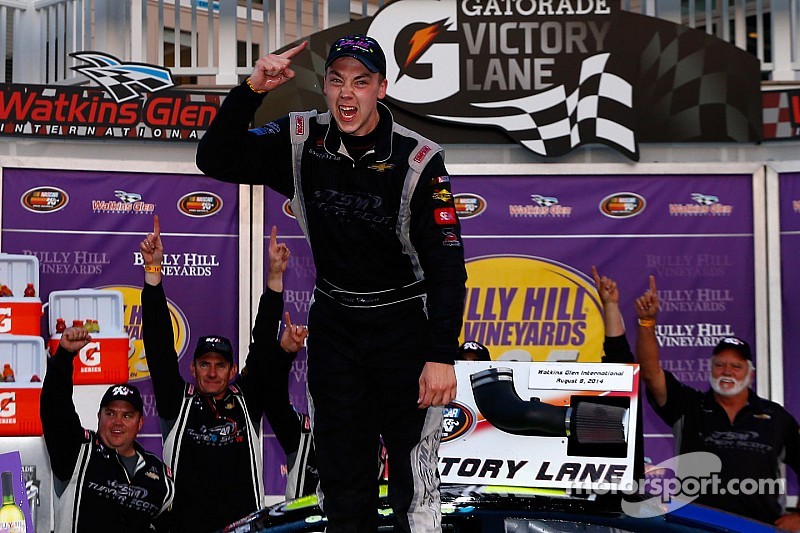 Turner Scott Motorsports (TSM) came into the second and final road course event of the 2014 NASCAR K&N Pro Series East (NKNPSE) season at Virginia International Raceway (VIR), looking to end the day in victory lane. TSM started the day by qualifying all five cars inside the top 12, with Scott Heckert capturing the pole award, the third for the 20-year-old of the season. Heckert would end the evening where he began, capturing his second-career NKNPSE victory and second win in a row in a caution-filled Biscuitville 125. Hayley followed suit, bringing home a runner-up finish. Kaz Grala was able to finish in the top five, with Brandon Jones and Ben Rhodes bringing home top 10s. The victory for Heckert marked the eighth win overall for TSM in 2014 through 14 events.

Heckert came into the Biscuitville 125 looking to bring home his second-straight victory of the season in the No. 34 Project Lifesaver Chevrolet. The day got headed in the right direction as Heckert won the 21 Means 21 pole award, his third of 2014. Heckert held steady, running inside the top five  through the halfway portion of the race and withstood some late-race restarts, ultimately passing teammate Hayley on lap 52 to capture his second-career NKNPSE victory of 2014, the second in two consecutive weeks, following his win at Watkins Glen one week ago. The victory moved Heckert up to eighth in the NKNPSE Driver Point Standings.

"What an amazing race at VIR," Heckert said. "I knew we had to conserve the car for a long time so it was good at the end. The plan worked perfectly and the car was fantastic at the end. This crew is amazing and they deserved the road course sweep. A big thanks to everyone at TSM and Project Lifesaver for their continued support."