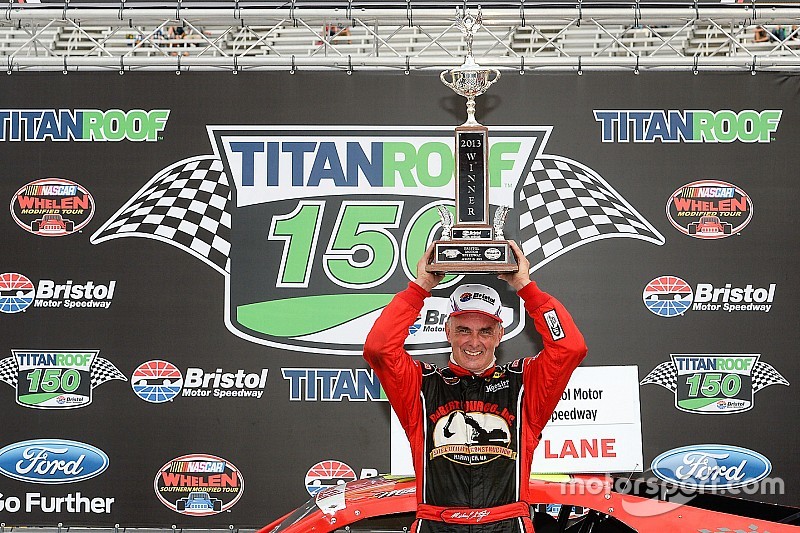 Modified racing legend talks NASCAR career and reflects on his accomplishments and life today at home.

Motorsport.com caught up with the recently retired Stefanik from his home in Rhode Island for this week’s edition of ‘Where are they now?’

The NASCAR Hall of Fame in Charlotte, North Carolina has already inducted two veterans of the oldest touring division in NASCAR, modifieds, and Stefanik could soon be the third former modified standout to join former champions Jerry Cook and Evans.

For Stefanik, 58, making it into the NASCAR Hall of Fame would be a great honor, but it wasn’t his goal when he started racing nearly four decades ago.

Stefanik grew up watching his older brother, Bobby, race modifieds at the now-shuttered Riverside Park Speedway in Agawam, Massachusetts near the Massachusetts-Connecticut border. That’s what attracted him to driving.

“My brother was 15 years older than me and I can remember as a kid going to watch him race at Riverside,” Stefanik said. “I always enjoyed watching him race on that track and I knew I wanted to do that too someday.”

Stefanik had an early passion for building cars. When he was old enough drive, Stefanik decided to follow his brother’s footsteps.

He started racing as a teenager in the Limited Sportsman Division at Stafford Motor Speedway in 1976. Soon he moved into the Pro Stock Series at Riverside Park Speedway.

Stefanik expanded to modifieds at Stafford Motor Speedway and other tracks around New England in his spare time and later drove a modified for car co-owners Dave Tucker and Mike Greci. Tucker owned the car and Greci provided the motor for the car Stefanik drove.

Helping hand from a legend

Stefanik’s big break came in 1981. Evans contacted Stefanik and asked him to drive one of his cars in a modified race at what is now known as Thompson Speedway Motorsport Park in Thompson, Connecticut. The unexpected opportunity was something that Stefanik was almost too overwhelmed to receive.

Evans graciously offered Stefanik the ride to help the aspiring racer earn credibility with other car owners in the modified garage. Stefanik made the most of his opportunity.

“I was running second to Ronnie (Bouchard) in the race when the motor started skipping and he had a tire going down,” Stefanik said. “Greg Sacks wound up winning the race and he was third when I pitted.

“If I would have known at the time all I had to do was turn off my fans as we had a short in the wiring and I could have maybe won the race. Boy that would have been a great story if I did.”

Stefanik married his wife Julie in 1984 whose grandfather was Jack Koszela, and the two began a lifelong relationship on and off the track.

Stefanik continued racing and in 1985, Evans once again offered a vote of confidence about Stefanik in what is now known as the Whelen Modified Tour.

“Richie went to Jack (Koszela) at the Spring Sizzler and told him he ought to get back into car ownership and give me a chance,” Stefanik said. “Jack told me if I built a car he would buy the motor and that was how this got started.”

Julie has always been by Stefanik's side, but she wasn't afraid to tell him how she thought he was performing at times.

Stefanik made a combined 24 starts between 1985 and 1986 before expanding to a full-time touring modified-schedule in 1987. By 1989, he won seven races in route to his first modified title.

Stefanik’s second title came in 1991, but it wasn’t until six years later that he launched his record-setting run — one that hasn’t been equaled by any driver in NASCAR.

In 1997 and 1998 Stefanik accomplished a feat in the NASCAR Touring Series that has yet to be matched. He not only won back-to-back titles in the modifieds, he also won consecutive titles in what was then known as the NASCAR Busch North Series (now K&N Pro Series East) during the same time period.

“I was so fortunate during that two year run to have a great crew and owners with my modified car with Peter Beal and Charlie Bacon,” said Stefanik. “They gave me great support and equipment to race for titles and we were able to bring home two in a row and win 23 of the 44 races we ran over the two years.”

On the stock car side of things, Stefanik ran the Burham Boilers-sponsored car for Greci and a young Greg Zipadelli in the Busch North Series on a regular basis since 1995.

“We won the championship in 1997 in the Busch North car and then we had a change of crew chiefs as “Zippy” moved south to take a job with Roush Fenway Racing,” Stefanik said. “Mike and I had known each other for years and I drove for him back in my early days and we were determined as ever to show people we could get it done ourselves that next year and we did and won another championship.”

Stefanik credits a little bit of luck and the dedication of crew members for helping him set a record that has yet to be broken.

“I had a hard-working group of guys who would sometimes take the car to a race not even knowing if I would get there in time to race but they always had the car ready to go and I always appreciated that about them,” he said. “We had a plane ready to go and even got lucky as rainouts sometimes allowed us to make races we wouldn’t have if it hadn’t of rained the day before.”

Time for something new

Stefanik’s winning ways attracted the attention of former NASCAR Truck Series director Dennis Huth in 1998. Huth, told Stefanik, ‘We need to get you in a truck.’ That started the process for the now six-time champion to move on to a NACSAR national series.

At 40, Stefanik became a rookie in what was NASCAR’s Craftsman Truck Series.

“I started one race at the end of the 1998 season at Las Vegas and then ran the entire 1999 season,” Stefanik said. “We had some decent runs but racing on the bigger tracks was a totally different style of racing and I’d never been to any of those tracks.”

Stefanik finished second in his series debut at Homestead-Miami Speedway in 1998. He won 1999 rookie-of-the-year honors in his onlt full-time season in the series, scoring one top-five and nine top-10 finishes. The following year, Stefanik made eight starts in the NASCAR Xfinity Series in 2000 before returning to his roots.

Stefanik returned to full-time modified racing in 2001. He quickly won his fifth title and backed it up with another championship in 2002.

Stefanik went on to win a seventh title in 2006 and after recording his final win at Bristol Motor Speedway in 2013. He finished with 74 wins in 453 career modified starts.

In addition to winning nine NASCAR championships, Stefanik also finished second in the Busch North standings three times and in the modifieds twice.

Thank you to the fans & what’s down the road

Stefanik always hoped the fans knew how much he appreciated them and their support.

“I can’t thank the fans enough,” said Stefanik. “Many of them pulled for me for over 30 years and I would have them come up to autograph lines and mention races they watched me win from years ago and it was incredible the support I got from them.

“The fans spent their hard-earned money to watch me race and I always raced hard and wanted to put on a good show for the fans. New England race fans are dedicated and followed us to a lot of different tracks to watch races and I always have thought that showed we have some of the best NASCAR race fans in the country.”

With a resume that warrants induction into the NASCAR Hall of Fame, Stefanik thinks about it some but doesn’t let it consume him.

“It would be a great honor to get in to the NASCAR Hall of Fame but I try not to worry about it too much,” Stefanik said. “I didn’t start racing to get into the Hall of Fame or any of those types of honors, I just wanted to run well and win races and we got pretty good at it. If anything, I wish my brother Bobby was still with us so he could be there if and when it does happen.”

For now, Stefanik will just concentrate on working at the family-owned lumber yard and gravel business. In his spare time, Stefanik dabbles with his new hobby – flying airplanes.

“I’ve been practicing and hope to get my pilot’s license soon,” he added.