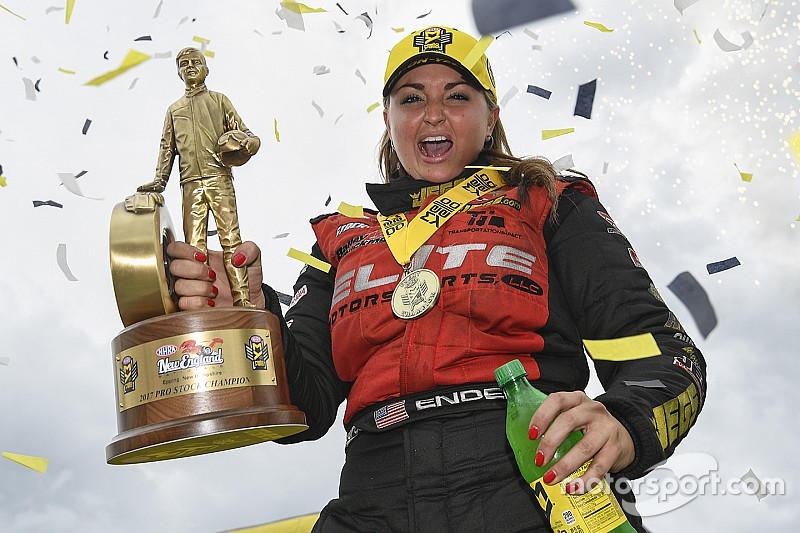 The drought has been long and hard for two-time NHRA Pro Stock champion Erica Enders, but finally she’s clutching another Wally trophy. Anne Proffit asks whether this is the start of a longterm revival.

After two championships in a Chevrolet Camaro (2014-2015), Enders and her Elite Motorsports team elected, prior to NHRA’s changing the category’s rules, to switch from Chevy to Mopar Dodge Dart racecars in 2016. Then the series announced adjustments to Pro Stock engines and chassis, making the changeover a thousand times bigger than originally intended.

It wasn’t until this past weekend, during the fifth annual New England Nationals at Epping, NH, that Enders and Elite found their way back to the Winners Circle in NHRA door slammer drag racing. It was a very long time to go without clutching a Wally trophy, especially for a two-time consecutive champion who was on her way to breaking many of the legendary Shirley Muldowney’s NHRA records.

(Incidentally, the Epping event nearly had three female victors, as Brittany Force earned the Wally in Top Fuel and her sister Courtney went to the Funny Car finals, only to fall to Matt Hagan’s Dodge Charger R/T.

This was Enders’ first victory since the win that gained her second straight title at Las Vegas in 2015, and she came from the No. 2 position to earn the New England victory. Enders and teammate Jeg Coughlin Jr. have been back in the swing of this always-tough competition since rejoining the Chevrolet ranks at Pomona in February, the starting race of every NHRA Mello Yello season.

“It’s kind of a culmination of everything that’s happened over the past year and a half. 2016 was nothing short of a challenge for us, but we stayed together,” Enders says.

As expected, she gives credit to a team that has had her back and kept her loose throughout the challenging times with Mopar and during the time it took to get back to their winning ways. In defeating rookie and fellow Camaro driver Tanner Gray in the New Hampshire finals, Enders became the seventh different winner in Pro Stock during the first nine races of a 24-event campaign, earning her 22nd win in 232 career Pro Stock races. She recognized Elite Motorsports has “gone back to a proven combination, which is our Chevy power plant at [engine-building concern] Elite Performance. I’m actually driving my 2014 championship car with a new front end on it,” Enders stated.

In a warning shot to her competitors she added, “I think that this is just the tip of the iceberg for us; we needed some things to fall our way. We were fortunate in 2014 and 2015… we had a fast car, we drove well and we had things fall our way as well. Maybe this is the turning point for us.”

Enders allowed the team did “slow up my clutch pedal” for the finals against Gray in Epping. “I go up there knowing all the adjustments made to the car and I make my adjustments accordingly. Cloud cover plays a role, track conditions play a role, ‘leaving’ plays a role. I hit it on the head both runs before, being .008 twice (on the tree).”

There’s been little time to let the thrill of victory sink in for Enders and her Elite Motorsports team as NHRA endures its Eastern Swing, a four-weekend, four-race hegira that encompasses racetracks East of the Mississippi River. This weekend the tour goes to Englishtown, New Jersey, then to Bristol, Tennessee and finally to Norwalk, Ohio before taking a short breather over the Fourth of July.

Acros the first nine races of the NHRA season, Enders’ fortune has cascaded from highs to lows and back again. With her most recent victory, she lies sixth in the regular season standings that end at the Chevrolet Performance U.S. Nationals on Labor Day. She’s been as high as fourth after the first race and as low as ninth, as the team relearns their Chevrolet racecar and discerns the changes that other Chevy teams have already discovered.

Although she’s got to battle points leaders and two-time winners Bo Butner and Gray, along with Summit Racing teammates Greg Anderson and reigning titleholder Jason Line, along with teammate Coughlin, currently in fifth place, sixth-place Erica Enders has no fear of failure against the guys.

“We may not have turned on many win lights in 2016 or yet this year, but we still have a blast together and they still dug deep and give it all the heart that they had and stayed positive,” she said of her crew. “That’s what is so awesome. I wished my entire career for a group like I have, and I intend to keep them for as long as I can.”