■ Del Worsham enters the Visitmyrtlebeach.com NHRA 4-Wide Nationals in first place in the NHRA Full Throttle Top Fuel point standings; he leads second-place Antron Brown by eight points. In the season’s first three races, Worsham has a win and two semifinal appearances making him 8-2 in eliminations so far this season.

■ Worsham is one of only five drivers in NHRA history to lead the point standings in both Top Fuel and Funny Car. The others are Kenny Bernstein, Don Prudhomme, Ed “The Ace” McCulloch and Gary Scelzi. 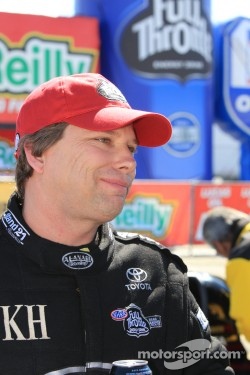 ■ Worsham has never won on zMax Dragway. Last year at this event, he was the No. 5 qualifier but lost to Ashley Force Hood and Cruz Pedregon in the first round of 4-wide Funny Car eliminations.

■ Worsham joined the Al-Anabi Racing team when it was founded in 2009 after driving for his family-owned Funny Car team since 1990. In 2009 and ’10, Worsham drove the Al-Anabi Racing Toyota Funny Car but joined his teammate in Top Fuel prior to the 2011 season. He competed in 22 races as a Top Fuel driver between 1993 and ’95.

■ Worsham has 26 wins in his career with one in Top Fuel and 25 in Funny Car; he is one of only 15 drivers with in NHRA history to win races in both Top Fuel and Funny Car. Worsham is seventh on the NHRA’s all-time Funny Car wins list.

Worsham prior to zMax Dragway:

“Las Vegas was another good outing for the Al-Anabi team. I feel lucky to be leading the points after three races, and we’re off to a great start; so far Top Fuel has worked well, and I can only see us improving from here. I still don’t really feel like the points leader, though, because we are only three races into the season. We haven’t gotten into a flow where we’re racing every other week. Hopefully, after Charlotte, we’ll get into a groove where we’re racing a lot. I kind of feel like we’re just cherry picking a race here or there. We may not be in the flow of the season yet, but it’s still nice to be on top for now.

“I’m gonna approach the 4-wide race just like any other race. If you get to the finish line first, you’re ok. Other than only getting one run in each lane during qualifying, it’s just another race because the fact remains, if you get there first, you’re gonna win.

“I think the Top Fuel process will be the same as it was in Funny Car. The retaining walls block the other lanes so I don’t see it being much different. Staging is a little different because we’re trying to stage four cars within seven seconds of each other. Other than staging, which can be a little bit tricky, I don’t see this race being a whole lot different than a normal drag race as far as driving goes.

“The spectators get the whole thing of 32,000 horse power racing at the same time which has to be just maximum sensory overload for them so it’s definitely different for the fans. I hope it ends up a really exciting race, and everyone’s talking about how great it was. Our Al-Anabi team will just go out there and do the best we can do.”

■ One year ago at the Visitmyrtlebeach.com 4-Wide nationals, Dixon was the No. 2 qualifier. He defeated Bobby Lagana and Steve Torrence in the first round of eliminations but lost to Antron Brown and Doug Herbert in the 4-wide semifinals. Dixon won the O’Reilly Auto Parts NHRA Nationals at zMax Dragway last September. 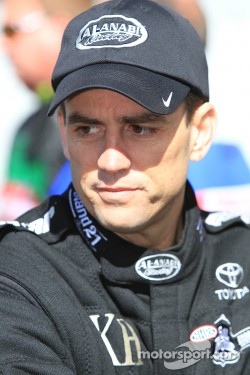 ■ If Dixon advances to the second round of the visitmyrtlebeach.com 4-Wide Nationals this weekend, that round will be his 900th career round of competition.

■ One race ago in Las Vegas, Dixon was the No. 1 qualifier; in eliminations, he defeated Steve Torrence before Doug Kalitta upset him in the second round.

■ Dixon won 12 races last season, more than any other year in his career. He is the first professional driver in NHRA history to win 12 races in 12 final rounds in a season. His 12-win total was also more than any other driver in the four NHRA Full Throttle classes this year. His 12 wins happened at Pomona, Calif., Baytown, Texas, Las Vegas, Atlanta, Joliet, Ill., Englishtown, N.J., Norwalk, Ohio, Sonoma, Calif., Brainerd, Minn., Indianapolis, Charlotte and Reading, Pa.

■ Dixon is one of the only four NHRA Full Throttle Series drivers with 600-career round wins. The others are John Force, Kenny Bernstein and Warren Johnson. Dixon is fourth on the NHRA’s career round wins list with 602 round wins; Bernstein is third with 681 round wins. Dixon won 62 rounds last season which is his career best and second most ever in Top Fuel; Tony Schumacher won 76 rounds in 2008.

Dixon prior to zMax Dragway:

“Four-wide is back, and I’m excited to take another shot at it. Last year, only one team went out of there excited about it, and it wasn’t the Al-Anabi team. It really is a lot different than our normal style of racing, and it really makes you feel like a jockey on a horse getting lined up in a chute. They open the gates and let everybody go at the same time. It’s a lot different, but I’m ready for another crack at it.

“For me, the biggest thing is just being mentally focused and not letting any distractions get in the way. The object is to keep it simple. You’re in one lane and you have one light you need to leave off of and go race. If you add any more to it, it’ll just slow you down.

“It’s equally challenging for the teams because we’re only gonna get one qualifying run in each lane, and it’ll be under varying weather conditions. So if one lane is better than another, you won’t get another crack at it. So you have to hope the weather is good for all four qualifying sessions. Also, with the cars making half of the normal runs in each lane, there’ll be less rubber on the tracks. Four-wide racing is definitely just as demanding for the teams as it is for the drivers. It’s a challenge, but the Al-Anabi team is up for it.”