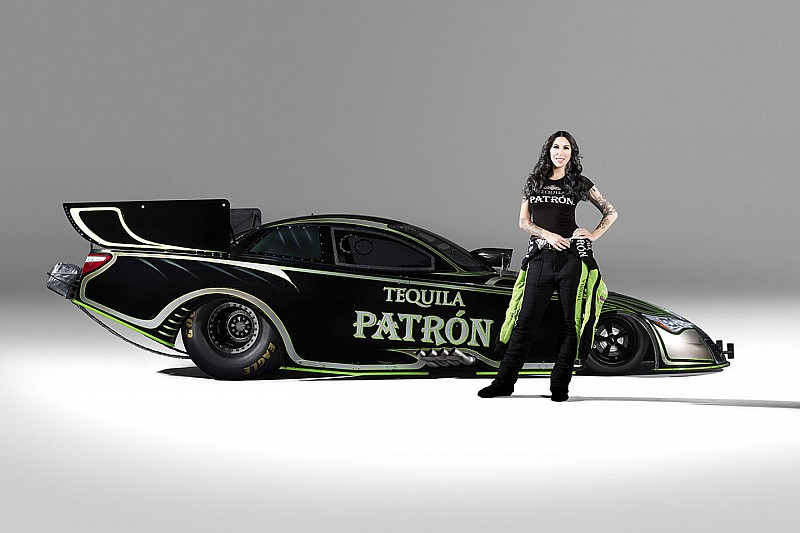 With 99 professional events under her belt, DeJoria is a proven force on the track.

Santa Monica, Calif.  -- Alexis DeJoria is poised to make history this weekend at the 56th annual Circle K NHRA WinterNationals in Pomona, California, where she will become the first female to enter 100 Funny Car events.

With 99 professional events under her belt, DeJoria is a proven force on the track. Along the road to 100, DeJoria has picked up three national event wins, including the prestigious 60th annual U.S. National in Indianapolis, became the first female to break the three-second Funny Car barrier, and earned three No. 1 qualifiers. Over the past two years DeJoria has finished in the Top Ten in the Funny Car points standings.

DeJoria enters her fifth season at the controls of the Tequila Patrón Toyota Camry Funny Car this weekend, but dreams of a career behind the wheel came long before her professional debut.

In her teenage years, DeJoria found herself drawn to the ‘hot rod’ crowd. When she was sixteen years old a friend took her to the NHRA Winternationals in Pomona where she decided on the spot, that she would one day pilot a Funny Car.

After graduating high school, DeJoria went to work for her father’s company, John Paul Mitchell Systems. Despite enjoying her tenure in the family business, the itch to race remained. DeJoria had her sights set on a goal, and she was determined, but that didn’t mean immediately hopping into the cockpit of a nitro fueled Funny Car. Instead, DeJoria took her time, grinding her way through drag racing’s ranks, learning one class at a time while earning the respect of crews and drivers along the way.

She began her NHRA career in 2005, competing first in the Super Gas category before transitioning to a rear-engine Super Comp dragster. Within eight months of her NHRA entrance, DeJoria had advanced to two final-rounds and went on to win the Sportsman Nationals in Fontana, California. From there DeJoria spent nearly six years behind the wheel of a Top Alcohol Funny Car (TAFC), even owning her own team at one point.

In 2011, she continued to compete in the TAFC class while spending her off-weekends making test passes in her future Kalitta Motorsports teammate’s Funny Car. She went on to win the 2011 NHRA Northwest Nationals in the TAFC category before joining Kalitta Motorsports and making her highly anticipated Funny Car debut at the 2011 Texas NHRA FallNationals. DeJoria went on to compete in the final three Funny Car races of the 2011 calendar before embarking on her ‘official’ rookie season in 2012.

As she gears up for this weekend’s 2016 NHRA season-opener, DeJoria reflects on her journey to this milestone.

“When I found out that Pomona would be my 100th race, it kind of took me back. I just can’t believe I’ve already competed 99 times in a Funny Car. It went by pretty fast,” said DeJoria, who joins Shirley Muldowney, Erica Enders and Angelle Sampey, among other female NHRA drivers in the ‘100 club.’

“I’ve learned so much over these first 99 races and I think it really does take about 100 races before you feel settled in that race car. When there are things that come up- and there always will be- I feel much more acclimated to my race car, to my team, and to my series. It’s been a short but long journey, and I’m really proud to be in this position and say that after this weekend, I’ve been able to compete in 100 NHRA Funny Car events.”