Mopar® Dodge Avenger NHRA Pro Stock driver Allen Johnson claimed the No. 1 starting position for the second straight year at his home track of Bristol Dragway in dramatic fashion, seizing the top spot in the last pairing of the final round of qualifying today at the 11th Annual NHRA Thunder Valley Nationals. Johnson will battle against Steve Kent in the opening round tomorrow. 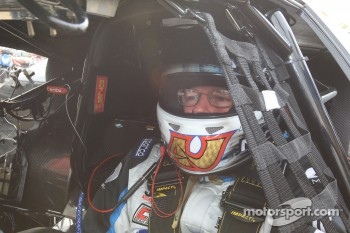 Johnson goes for his second straight win tomorrow (he won the NHRA SuperNationals in New Jersey on June 5) after powering to the pole with a 6.668-second elapsed time (ET) at 206.89 mph. The No. 1 spot was the 16th of Johnson’s career and his first of the season. The Team Mopar veteran posted the best runs in both qualifying rounds today, recording a 6.697/206.51 mark in the opening session. Johnson laid down passes of 6.709/206.70 and 6.696/205.98 in two rounds of Friday qualifying.

“We’ve just been building up steadily in this Mopar Dodge Avenger, like I’ve been preaching all year,” said Johnson, a Greeneville, Tenn. native who grew up racing at Thunder Valley. “That’s our game plan this year. Start off a little bit conservative, make sure the Mopar Dodge gets from A to B, build on it, and make improvements each run during the race.

“To do anything good here at our home track of Bristol Dragway is awesome. Hopefully, this No. 1 spot is just the start, and we can take that momentum into tomorrow, just like we carried the momentum from our Englishtown win into this event.”

“The rain this afternoon cooled the air off a bit, and gave us a shot at that No. 1 spot,” said Johnson. “Things seem to be coming in twos—our second No. 1 at Bristol, the chance for our second straight win. Hopefully, that will turn into something really good tomorrow.”

Mopar-powered Dodge Avenger Pro Stock rookie phenom Vincent Nobile qualified No. 7 and will face off with Ronnie Humphrey in the first round tomorrow. V. Gaines will start from the No. 12 spot in his Dodge Avenger and will go head-to-head with Ron Krisher.

The patriarch of the Greeneville-based Johnson clan, Roy Johnson, father of Allen, advanced as far as the second round in overall Stock eliminations in his Mopar Challenger Drag Pak. Roy Johnson bested Mark Williams but was unable to get past Lee Zane. Despite his sooner-than-desired exit, the elder Johnson thoroughly enjoyed the opportunity to race with his son Allen at their home quarter-mile.

“It was a blast to race this Mopar Challenger Drag Pak,” said Roy Johnson, who will now turn his attention to his primary job, prepping the Mopar HEMI engines for son Allen’s Pro Stock Mopar Dodge. “You don’t get any better than this. Just having the chance to run is fun. Being a local boy, I must have had a thousand people come up and wish me good luck. Now we’ll just focus on putting Allen’s Mopar Dodge in the winner’s circle on Sunday.”