An emotional return to Englishtown for Alexis DeJoria

Boca Raton, FL (May 30, 2012)— It’s been nearly two years since NHRA driver Alexis DeJoria’s infamous crash at the Old Bridge Township Raceway Park in Englishtown, NJ, when she went barreling through the sand pits and safety nets after her brakes failed and her parachutes ripped off the back of her Top Alcohol Funny Car. Although understandably shaken up by the incident, the tough-as-nails Kalitta Motorsports Tequila Patron Toyota Camry Funny Car driver hasn’t let fear keep her from fulfilling her dreams of racing professionally in a Nitro-fueled Funny Car. 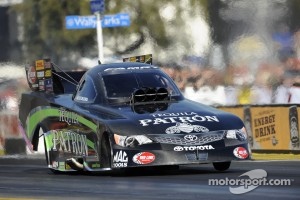 Of returning to Englishtown, DeJoria said, “Obviously it’s an intense race and there are a lot of emotions flowing. It’s a tough weekend for a lot of people. We’ve seen so much sadness there, and I feel so grateful and blessed that I’m able to return to that track when others weren’t so fortunate,” she said, referring to the tragic deaths of Neal Parker and Scott Kalitta, son of legendary Top Fuel and Funny Car racer, and owner of Kalitta Motorsports, Connie Kalitta.

DeJoria’s violent crash is what initially sparked the relationship between her and the Kalitta family, which eventually led to her joining their team. “This weekend is especially emotional for me, but in a good way. It will be not only my first time visiting the track as a Nitro Funny Car driver, but also as a member of the Kalitta Motorsports team, so it’s almost like I’ve come full circle. We’ve all been through a lot there, but I’m excited and honored to come back as part of such a wonderful organization.”

Historically, Englishtown has been a good track for DeJoria. “I’ve always done well there, and believe it or not, it’s my absolute favorite track. Even when I had my crash, I was running my ‘career best’ at the time, so I’m hoping we can run some good numbers this weekend, and go a few rounds on race day,” she said, adding, “I just want to stay very focused on doing my job and not get too wrapped up in the emotional side of it.”

Johnny Gray gearing up to go fast in Englishtown

Past experience in Englishtown has Shane Gray eager for return

Crampton, Worsham and Johnson lead after first day of qualifying at NHRA Springnationals