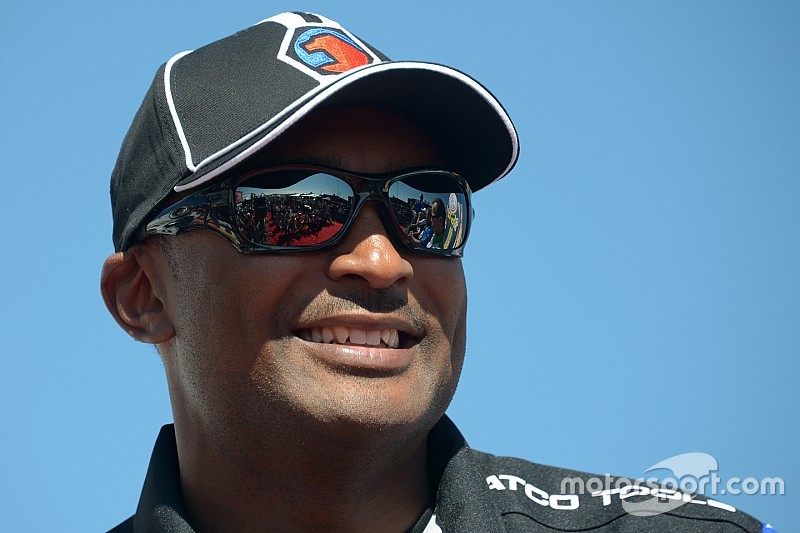 A multiple race winner on Pro Stock bikes, Antron Brown is a two-time and reigning Top Fuel champion. This weekend, he could reach a career landmark that sets in stone a place among NHRA's elite. Annie Proffit reports.

Antron Brown, the reigning NHRA Mello Yello Drag Racing Series Top Fuel champion is currently in his ninth year competing in that category after amassing a stellar career in Pro Stock Motorcycle. Although it took some time for Brown, a high-school track athlete who is still as lithe as he was in his motorcycle riding days, to acclimate to the demands of the nitromethane-burning class, he’s managed to make it to the finals 99 times since joining the Top Fuel tour.

Brown won his first Top Fuel title in 2012, despite failing to make the finals after burning his hands in a conflagration earlier in the day. He had to wait, gloves on his aching mitts as the race ensued, but Brown gamely lifted the ultra-heavy Wally trophy awarded to the champion of every Mello Yello NHRA pro class.

Last fall, he was in fine fettle at Pomona as he won his second championship, despite losing in the final to Shawn Langdon. This year, as he works on retaining that championship, Brown has a single victory at Las Vegas and stands second to Brittany Force, who has two wins and a commanding, 63-point lead. However, the season is not even at its quarter mark, which it reaches after this weekend’s race at Royal Purple Raceway in Houston, Texas.

With Brown’s victory at Las Vegas and runner-up slot in Charlotte, he’s definitely on a steady upward swing and since moving to Top Fuel in 2008, he has reached the finals in Houston on every even-numbered year. It’s also the site of his first ever Top Fuel victory in his rookie year in the category. Brown raced to the final round in 2010 and 2012 in Houston before finding the Winner’s Circle once again in 2014.

In Pro Stock Bikes, Brown won precisely half of the finals he reached – 16 out of 32. In Top Fuel, he has achieved a considerably better percentage than that, with 39 wins from 67 finals. His overall stats thus tally up to 55 wins from 99 finals. And he was within a split second of improving that hit rate last weekend, as he strived for a third consecutive victory in the Four-Wide Nationals at Charlotte. However, he was aced by Brittany Force.

“We’re going to Houston this weekend and the main thing is we’re always gaining ground and learning each and every race - we’re growing,” Brown said of the Matco Tools Don Schumacher Racing (DSR) team that’s been together since 2008.

So it would seem. But you know that reaching a 100th final, while a significant milestone, will only feel truly satisfying to Brown if it leads to a 56th victory.

Pritchett’s poignant goodbyes and hopes for the future