Located outside our nation's capital, just a mile or two outside the Capital beltway, there's a small shop known only by its reputation and name; Banshie Studios. The shop isn't known by its location and that's by design. Lost among the half dozen ...

Located outside our nation's capital, just a mile or two outside the Capital beltway, there's a small shop known only by its reputation and name; Banshie Studios. The shop isn't known by its location and that's by design. Lost among the half dozen body shops in the area, the non-descript brick building is home to Banshie Studios. It's where Chuck Buckler creates the mind-blowing art seen on the NHRA's most magnificent machines. 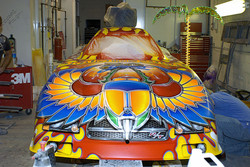 Painting of the 'House of Kolors' theme in progress at Banshie Studios.
Photo by Greg Gage.
The sport of drag racing is generally credited as evolving from the hot rodders that ran their modified machines on the dry lake beds of southern California. Enhancing these metal creations, some made from belly tanks of World War II aircraft, entailed dreaming up wild paint schemes, accentuating body lines with pin stripes and flames or adorning them with beautiful women or demons.

Although the sport grew quickly from its humble beginnings, funny cars had yet to attract major corporate sponsorship in the sixties and early seventies, providing artists with a blank canvas to produce some of the wildest pop art ever seen. The artwork took on a life of its own, often producing nicknames for the cars and drivers. These nicknames brought about rivalries, famous to this day.

When a young Chuck Buckler attended drag races at Aquasco Speedway near his home in Maryland, he marveled at the cars driven by Jungle Jim, Snowman and the Hawaiian. At home he played with diecast cars driven by the Snake and the Mongoose. Presented with the opportunity, Chuck knew he would make his mark in drag racing, painting cars like those that had impressed him as a youngster.

Sometimes opportunity knocks and sometimes you have to be told there's someone at the door. Mrs. Henderson knew she had a diamond in the rough in her seventh grade class at Benjamin D. Foulois Junior High. George Paul, Chuck's partner at Banshie Studios, is quick to reveal what Ms. Henderson saw in her young pupil. "Michelangelo in trucker's clothing," he says with a smile.

Although Andrea Henderson, who still stops by the shop on occasion, directed Chuck towards the Rhode Island School of Design, he decided to develop his craft on his own, accepting an apprenticeship with a sign painter.

"I became a sign painter because it encompassed everything from air brush to gold leaf to etchings, even silk screen. I apprenticed with a guy and learned the tools of the trade and then I taught him how to air brush."

Chuck's first time working with George came about ten years ago when, "I needed some custom work done on a 1997 Monte Carlo," said George, who owned Advance Collision, a body shop in Beltsville, Maryland. "I searched over hill and dale looking for a guy named Chuck Buckler. He had a reputation as a good artist, a good air brusher. Chuck, who was working at place doing artwork for t shirts, was on his lunch break, taking his afternoon meal at Chili's when George finally found him." 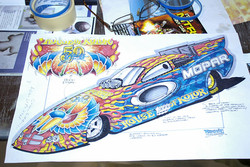 The concept drawing of the final look.
Photo by Greg Gage.

Two years later the pair would work again, customizing the Washington Post Navigator for washingtonpost.com. The car was a centerpiece at the Washington DC International Auto Show.

Over the next couple of years, Chuck worked for George Paul on a freelance basis. The work was steady enough that Chuck found himself working with George.

Six years after meeting in a Chili's restaurant, the pair started Banshie Studios.

"A banshee is an aberration of a screaming dead women," said George. "That fit perfectly since we do screaming paint jobs."

Ask George Paul what he does for Banshie and he'll tell you he doesn't do anything but stand around. Quick to admit that George is his handler, Chuck knows that George does a good job taking care of the business. Managing Banshie's operations entails scheduling the work, procuring supplies, and as the business manager, negotiating the deals.

Working on a tight schedule means George does a lot more than stand around. When Gary Scelzi fired up his House of Kolor tribute car at the Texas Motorplex, it was under a Dodge Charger body that ran at Indianapolis three weeks earlier sporting a different livery.

After going to the final round at the U.S. Nationals at Indianapolis, George was standing around in the pits waiting for the body.

After making his run in the final round at Texas, the Don Schumacher Racing crew helped George strip the Big Daddy wrap off the body before loading it onto the trailer. Under the wrap was a green Brut funny car paint job that would be stripped back in Maryland.

The 37 hour round trip to Indianapolis afforded George four hours of sleep.

Once back at the shop a crew was waiting to go to work. Arriving at the shop on Tuesday, the Banshie team, consisting of three full time employees, Chuck, George and Dirk Phillips along with a faithful crew of volunteers, had to have the car ready for delivery in 11 days. The body would be delivered to the next stop on the NHRA schedule, Maple Grove Raceway in Pennsylvania.

"We strive to do our artwork on the sealer," said George, "We pride ourselves on doing the lightest funny car a top fuel paint jobs because we don't paint the entire car." 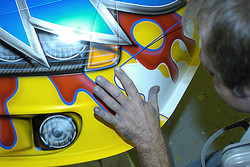 After the base coat, a mask is prepared to layout the artwork on the body. "We find the centerline and lay the biggest pattern out, which is the scarab on this car," said George. "We trace it onto the body and then we back tape the pattern and then the color is applied and that area is taped off before the next color is applied."

"No color is ever overlapped," said Chuck. "That's what keeps the weight down."

"The scarab on the hood took me 30 hours," Chuck reported. "We couldn't use a mask, it all had to be hand taped. Start to finish, not including prep time, the paint will take 130 hours, easy."

While Chuck artwork takes a great deal of time to create, it can be destroyed in a matter of seconds. Any highlight reel from 2005 shows Gary Scelzi's funny car exploding at Indianapolis. The car flexed in the middle before becoming engulfed in a huge fireball. The Mad scientist artwork was reduced to ashes in a matter of seconds.

"It's actually humorous," said George. The Banshie crew finds solace by "watching art being destroyed in a very flamboyant way."

"The first couple times it happened, it hurts," Chuck said. "Given the number of man-hours we put into the car, it can be destroyed in five seconds, so it can hurt."

Unable to maintain eye contact, George looked away before adding, "It's good for business, it means we'll get another car."

"Max Naylor destroyed his car before he even made it to a race," Chuck said. The Jagermeister Pro Stock car was testing at Georgia when it rolled over crushing the body. "First time out of the box in a brand new car and all that was left was the trunk lid."

"It's unfortunate that happened to Max because he's a great guy," said George. "There are a lot of good teams out there waiting for a break and Max has one of those teams."

The House of Kolor car was finished in time for Sunday delivery at Maple Grove. Delivering the car to Maple Grove would give the Banshie crew an opportunity to do some business and watch the races too. "That's our relaxation," said Chuck.

At the track, George and Chuck, who could still easily pass as a truck driver, walk unnoticed through the pit area. "The coolest thing is to go through the pits and Jim Head will put his car out with the fans," said Chuck. "He wants people to touch it. He knows that's what the fans want. They don't want to have to look through the pit area to see the car in the very back."

"Everyone stands there and takes pictures with their kids," said George.

Observing the fans appreciate their work is what continues to drive the team at Banshie Studios. Over 20 cars have gone through the shop this year, but the Banshie magic is not limited to cars. Last October the pair traveled to Canada to perform their enchanting work on Oakley's corporate jet. The work, comprised of camouflaging the world on to the jet's fuselage, impressed the staff at Bombardier, including one vice president, who spent time in the assembly area watching the duo practice their craft. 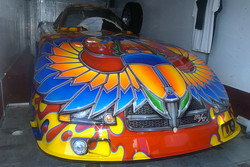 The body in the transport being delivered to Gary Scelzi's crew at Maple Grove Raceway.
Photo by Greg Gage.
"The job required 22 painters on two shifts," said George. The airbrush work had to be completed in 12 days.

"It was a huge undertaking," said George, "but out of all the jobs we've worked on, it was the smoothest from start to finish. It was such a big project we were a bit apprehensive, but we pulled it off and we're scheduled to do another jet this year."

Corporate jets are just another blank canvas for Chuck who has done cars for Gary Scelzi, Tony Pedregon, Kenny Koretsky, Cristen Powell and Scotty Cannon. While Chuck can recite a long list of driver's names, he's more proud of the names of the cars. Undertaker, Gotham City, Henchman, Headhunter, Bill Collector, Pirate of the Carribbean all take him back to the days of the Snake and the Mongoose.

"Everyone sees corporate cars all day long. Go to a NASCAR race if you want to see corporate cars. I do monster trucks too. I want to see kids touch the cars. I like to see their face when they touch a car with a big monster on it.

"Kids cheer for the Undertaker, or the Predator or the Sorcerer. No one sits in the stands and cheers for Dupont."

Chuck and George want the cars painted at Banshie Studios to possess a personality of their own, a killer screaming personality.