POMONA, Calif. - His contributions to the sport of drag racing are countless. In 1978, Kenny Bernstein competed in five NHRA events. He finished in 38th place that season but always had higher expectations. He has spent more than 20 years improving ...

POMONA, Calif. - His contributions to the sport of drag racing are countless. In 1978, Kenny Bernstein competed in five NHRA events. He finished in 38th place that season but always had higher expectations. He has spent more than 20 years improving on that finish, and has made it to the top several times. 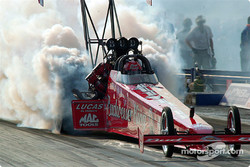 Kenny Bernstein's last trip down the strip at Gainesville.
Photo by Greg Gage.

His accomplishments are nearly as countless as what he has given to the sport. Bernstein remains the only driver in NHRA history to win championships in both the Top Fuel and Funny Car categories. He will forever be the "King of Speed" because he was the first driver to surpass the 300 mph mark (Gainesville, 1992).

The six-time champion has decided to close out his career as a driver. The Automobile Club of Southern California NHRA Finals at Pomona Raceway will be the site of Bernstein's final race. Bernstein, Del Worsham, Bruce Allen and Angelle Savoie are the defending winners in their respective professional categories for the $1.9 million race, the final of 23 events in the $50 million NHRA POWERade Drag Racing Series.

Bernstein has celebrated his career and retirement through a year-long tour labeled "Forever Red: A Run to Remember." Once retired, Bernstein will continue to be the team owner of the Budweiser King Dragster, driven by his son Brandon.

What follows is a brief Q&A session with Bernstein as he prepares to leave the driver's seat for good.

Q: How do you feel about closing the season and career in front of the Pomona, Calif., crowd?

BERNSTEIN: First of all, it's our home, so we enjoy being there very much. We're originally from Texas, and we have a lot of great fans in Dallas, but California is where we have been for the last 20 years so we always like opening and closing the season there. I think it will be a great race. 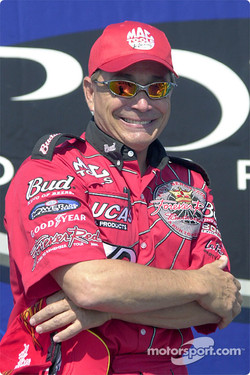 This is Kenny Bernstein's last year in racing.
Photo by Greg Gage.

Q: What has been the most memorable event of the 2002 season so far?

BERNSTEIN: Probably the race in St. Louis because (Larry) Dixon didn't qualify and that gave us the opportunity to get closer and then we won the race. We had never won in St. Louis before so I think that is the biggest highlight so far.

BERNSTEIN: Actually there's two. One is slightly ahead of the other. The 300-mile per hour run on March 20, 1992 in Gainesville gets the edge. I actually know the exact date on that one because it was such a phenomenal accomplishment by the team and for (crew chief) Dale Armstrong and Wes Cerny and the guys who where there that day. It'll probably be the last great barrier to be broken in drag racing history and that was just an awesome day. The other one, which is really close to the first one, is last year in Las Vegas when Brandon and I won together. It was his first win and it was the first time a father and son had won at the same event in NHRA history. Add in the fact that my father was there -- his grandfather -- and it really makes it special.

Q: How do you want to be remembered?

BERNSTEIN: That is not for me to decide. That is for the people to decide. We just try to always do the best we could out here all the time and try to win. That's all we can do. We try to take care of as many fans as possible and our sponsors. So it's really up to everyone else how to make the decision on what they want to remember me as.

Q: Has this final season met your preseason expectations?

BERNSTEIN: The only thing that comes close to my expectations is winning. The POWERade championship is the only thing that matters for me. If we don't win it, then we didn't get it totally accomplished. Because we were able to win last year and be competitive at this level this year, that is certainly satisfying in my last two years.

Q: What would you like to accomplish in your last race?

BERNSTEIN: Well, we would like to win. That is the only way to give us a chance to win the championship and that would be a heck of a way to go out. That's a tall order though. But that is what we always try to do at every race we go to. 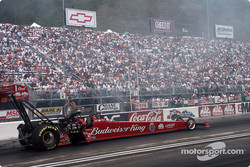 The Budweiser King on the Forever Red Tour.
Photo by David Reininger.

Q: What expectations, if any, do you already have for Brandon?

BERNSTEIN: We haven't looked that far ahead yet. Brandon seems to have a lot of natural talent and he proved that last year in the alcohol car. All we'll do is get in there and go after it as hard as we can. With this team, he'll be able to win - if he can do the job - right away. It's just a matter of how quickly it all comes together. Have I thought about next year yet? No, not really. Not too much will change because I have been a team owner for 25 years and that won't change. The main thing at this point and time is trying to win a championship and continue to go on as hard as we can.

Q: Has this been a fun season for you?

BERNSTEIN: Only winning is fun for me. There is nothing else fun unless you win. That's it. It certainly has not been a bad season. We've been able to see a lot of fans. We've been awful busy and it has been a grind on all of us in the organization, including the team because I am awful busy with other things. We have given nothing away at the chance to win the POWERade championship. If we don't do it, it won't be because of a lack of effort. It's been a good season and a fruitful one. It's been one that when it is over, I am sure I will be glad it is over. At the same time, we've done real good and you can live with that.

Q: Looking at everything you have accomplished during your driving career, can you go into a team owner role next year and feel satisfied?

BERNSTEIN: I can go into that team owner role feeling comfortable. I will remember the success we've had over the years with the great teams we've had and with the great people. The people that have helped me accomplish things over the years deserve a great amount of credit because it truly has been a team effort. Even back when I started in Texas with guys who gave me my first opportunities. I owe a lot of people a lot of things. For a kid growing up in west Texas just wanting to race for a living and to hope he could do it and then to be able to do it with Budweiser, Lucas, Mac Tools and La Paz and other sponsors who have been with us for years, it's great. I'm quite comfortable with everything we've accomplished. It certainly helped by winning (the championship) last year because it took a lot of pressure off at the end of our career. We did accomplish it and we did it in grand style. The team and Tim Richards (crew chief) did it in grand style. Whatever happens this year, so be it. If we happen to win it again that will be the icing on the cake. If we don't, I'm comfortable with it all. I feel good about everything. I'm thankful for what we've been able to accomplish, but those are records and one day they'll be broken.

Q: As a team owner will you approach it in the same way as a Don Prudhomme, where you will field entries in both Top Fuel and Funny Car?

BERNSTEIN: I don't think so. My job is to take care of Budweiser, Lucas Oil, Mac Tools, La Paz, my son (Brandon) and Tim and Kim Richards and the team. Who knows, maybe one day we'll look at two or three cars. Right now it's not on the agenda. I'm a firm believer through my years of experience in NHRA, NASCAR and Indy Car racing that the more you get, the more problems you have and the harder it is to control.