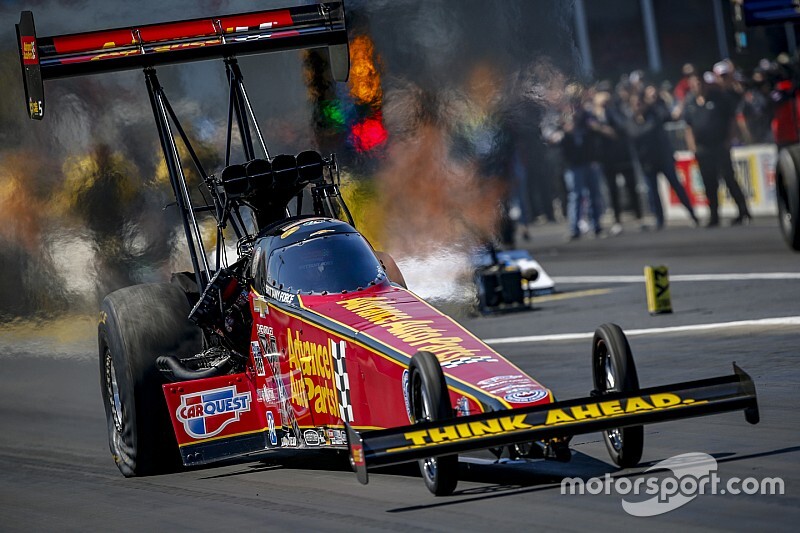 Force, who set the national speed record in the class on Friday with an impressive run of 338.17 mph, broke the track E.T. record in the final round on Sunday, going 3.652-seconds at 334.73 in her Advance Auto Parts dragster to hold off points leader Steve Torrence during an epic final round duel in the 900th Top Fuel race in NHRA history.

Torrence went 3.719 at 330.63, but couldn’t track down Force, who moved within 16 points of Torrence heading into the final race of the season. It gave Force, who beat Pat Dakin, Austin Prock and Billy Torrence earlier in the day, a much-needed second win this season and 10th in her career, setting up a must-see finale in Pomona in two weeks.

“This weekend has been incredible for this team,” said Force, who earned her first Vegas victory. “I’ve always wanted to win here. We set the miles-per-hour record here and we’ve accomplished a lot, but what we’re really going after is a championship together. I felt good coming in and we got the job done. It was pretty cool to (win) 151 and 150 with Erica today.

“David Grubnic has been awesome to work with and I’m very blessed to have him as my crew chief. I want to go straight to Pomona and I’m going to do everything I can to stay in this thing. I’ll be ready when Pomona gets here. We’ve been there before and we want to do it again with this Advance Auto Parts team.”

Torrence reached his 14th final round in 2019 and 55th in his career thanks to round wins against Scott Palmer, Mike Salinas and Doug Kalitta. Torrence will try to hold off Force – a matchup of the last two world champs – in Pomona and claim his second straight world title.

Hagan suddenly finds himself back in the championship mix in Funny Car after picking up his second straight victory, going 3.876 at 331.36 in the final round in his MOPAR Dodge SRT Hellcat Widebody. It ousted Jonnie Lindberg’s 3.945 at 321.12, putting Hagan third in points and 56 behind leader Robert Hight. Hagan beat Paul Lee, Tommy Johnson Jr. and Bob Tasca III to reach the final round, leading Lindberg from start to finish to win for the fourth time in 2019 and 33rd in his career.

“I’m telling you what, I’m excited and fired up right now,” Hagan said. “When you have that opportunity to come into the Pomona still in the championship hunt, that is why we do this. That’s what gets me fired up and motivated, and I’m just so proud of my guys. They’re killing it and they all just rise to occasion.

“I feed off that and coming into Pomona, I wish it were tomorrow. To come out and turn four win lights on at a Dodge-sponsored race, that’s a fairy tale. It’s hard to win back-to-back races, and it just shows you what we’re capable of. We’re going into Pomona and we’re going to work as hard as we can.”

Lindberg reached his fourth career final thanks to wins against defending world champ J.R. Todd, Cruz Pedregon and Jack Beckman, who remains second in points, 46 behind Hight heading to the final race of the season.

Points leader Enders came up big in Vegas again thanks to her 6.617 at 208.04 in the Pro Stock final round in her Melling Performance/Elite Motorsports Chevrolet Camaro against teammate Jeg Coughlin Jr. The win, which is Enders’ second this season, included all kinds of milestones, including the 25th in her career, the 150th for females and the 200th win for Camaro in Pro Stock. It also extended her points lead to 92 points over Coughlin, as Enders eyes her third championship.

“My guys just keep on giving me a really good racecar,” Enders said. “It’s been a great day and to get the 150th, I’m just really proud to be part of the group of such smart, strong, talented females out there. It was definitely taxing (today) and to have an all-Elite final, that was just the icing on the cake. It was huge to win today and we were able to rise to the occasion.

“We’re going to go out to Pomona to win the race. Anything can happen and I’ve been part of that. Winning in St. Louis and then Las Vegas, it’s not a big enough cushion for me. I’m excited about the opportunity.”

Defending PSM champion Matt Smith picked up his first playoff victory of 2019 thanks to his 6.855 at 195.90 in the final round on his Denso Auto Parts/Stockseth/MSR EBR. He outlasted Steve Johnson’s 6.863 at 194.04, picking up his second win this year and 24th in his career. He knocked off Katie Sullivan, Angie Smith and Andrew Hines to reach the final round. Smith, who won for the second time in Vegas, is fourth in points and trails Hines by 117 points.

“I can’t say enough about my guys and this team,” Smith said. “We took it into our own hands (against Andrew) and it’s not totally and mathematically over yet. I told everybody we were going to shoot for the moon in the finals, and it stuck. When it stuck, there’s nobody going to catch us when it runs like that. We just pulled it off in the final and did our job.”

Trying to play playoff spoiler, Johnson reached his second final round this year by beating Ron Tornow, Angelle Sampey and Scotty Pollacheck. Hines leads Jerry Savoie by 115 as he closes in on his sixth world title.