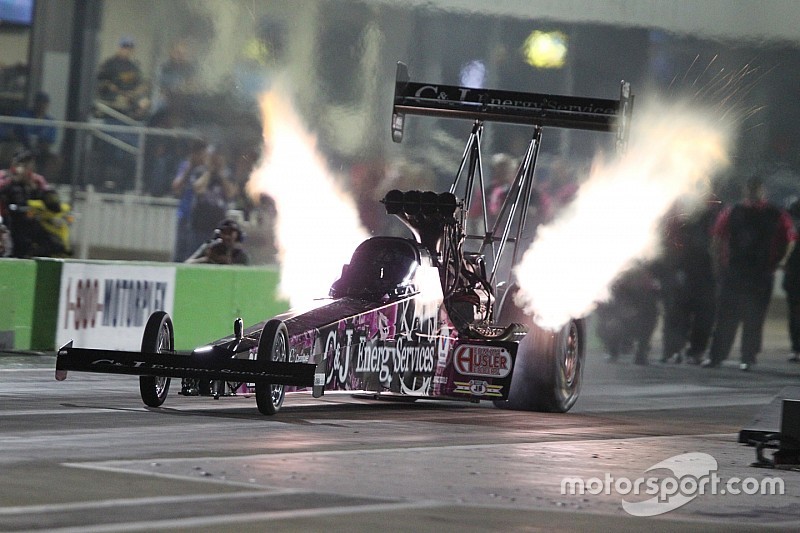 The world of NHRA Mello Yello Drag Racing Series Top Fuel competition shrank today as Bob Vandergriff announced he would be shutting the doors to his eponymous organization.

Retired driver Vandergriff, whose signature in his two victories was a run back up the strip from the top end of the racetrack, showed the driver’s strength and endurance - even while wearing full protective gear. With Pritchett joining his team this year, bringing along Quaker State, Gumout and FireAde to the two-car team that had primary sponsorship with C&J Energy Services, Bob Vandergriff  Racing (BVR) looked ready for a strong 2016 season.

As we all know, the gas and oil business has been lagging over the past few years, with oil prices dipping to numbers not seen in several decades. Coupled with the recent, unexpected death of C&J’s Josh Comstock, an idea of totally leaving the sport in which he’d grown up, suddenly gained traction.

As a professional driver, the Californian had been part of NHRA drag racing since 1994; he’d operated as owner/driver throughout much, if not his entire career. After leaving the cockpit in 2014, Vandergriff continued to field two cars - last year it was Connolly and three-time champion Larry Dixon owning the cockpits - but he’d decided that missing the growth of his four children and the toll that racing takes on relationships, well, this might be the time. Comstock’s death hastened that decision.

“I’ve enjoyed spending the last 22 years of my life in drag racing,” Vandergriff said. “I owe a lot to the sport, its fans and the individuals who have played key roles in my career.”

Pritchett’s comments, after joining BVR this season for, ostensibly her first full year of pro Top Fuel racing, were a bit more emotional, in particular since she earned her first pro Wally in February of this year. “It is beyond unfortunate, surprising and a tip of a seahorse to say the least with the retirement news of Bob Vandergriff and, ultimately, the doors officially closing at BVR today.

“I have a huge gratitude to Bob for believing in me, on and off the track, his steadfast efforts to keep this program afloat and providing me with the most memorable times made with some of the best people this phenom sport has to offer,” she posted on her Facebook page. “Coupled with my first Top Fuel win [this] makes my time at BVR ultimately invaluable.”

She saluted crew chief Mike Guger, who earned his first pro victory in that position at Wild Horse Pass Motorsports Park and the balance of her team, especially teammate Connolly. “Dave, I’ve learned a lot as teammates in our short time. Thanks for swapping practice trees from time to time and being the coolest. They say great things must come to an end, and this has been a short, but most epic run. The future is uncertain - and this is an all-too-familiar feeling - but THIS is where champions are made, when the highs are high and the lows are low.

“Not sure when I’ll be hitting the track again, but if you know me, you know I won’t lift,” she concluded.