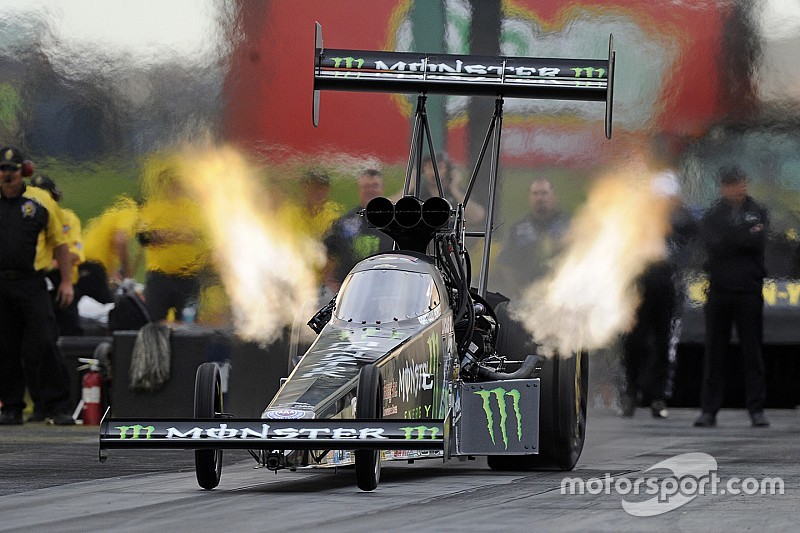 Force powered her Monster Energy dragster to a 4.169-second pass at 180.21 mph to outrun reigning world champion Antron Brown’s 6.566 at 103.47 in his Matco Tools dragster. Brown rattled and lost traction early while Force’s dragster backfired and released the parachutes just a little farther down track than Brown and she coasted to the finish line for her third win of 2016 and in her TF career.

She declared: “It’s awesome to be able to win here. We are exactly where we want to be as we go into the Countdown and our biggest race of the season in Indy. It feels so good to bring home another win.”

Brown, although beaten in this Brainerd final, still emerged from the weekend with the points lead and his fourth win of the season, having beaten Steve Torrence on Saturday in the delayed final left over from Seattle.

2014 top rookie Richie Crampton, from Adelaide, South Australia, secured his spot in the Countdown with a second round appearance.

Worsham’s fortunes took the opposite route to Brown’s, losing in the held-over Seattle Funny Car final to Ron Capps’ Dodge Charger, but sending his DHL Toyota Camry to a 3.908 at 327.27 to beat Matt Hagan’s Charger R/T in the Brainerd final.

“I’m very excited,” said Worsham, who moved to third in the points standings with the win. “I came in here with a lot of confidence, thinking we were going to do well and Friday came around and we couldn’t have made any better runs. Along came Saturday and we smoked the tires. We had to take a little step back today, but they put it together.

“Brainerd has always been a special place to me. Going back to 1991, my first No. 1 qualifier came here 25 years ago. I’m excited to be here. It’s a great place, great facility and the team did a great job. I’m happy to get the win, go to Indy and start the NHRA Mello Yello Series Countdown.”

Worsham, who won the championship last season without a regular-season win, tallied his first victory of 2016, 39th of his career and 31st of his Funny Car career.

Drew Skillman earned his first Pro Stock victory of the year and second of his career by posting a 6.648 at 208.97 in his Chevy Camaro to better seven-time 2016 event winner Jason Line’s 6.681 at 206.64 in his Ray Skillman Auto Group Chevy Camaro.

Skillman, the 2015 Rookie of the Year, won his first race since last year in St. Louis and beat Dave River, Bo Butner and Vincent Nobile before racing Line in the final.

“My guys have been working very hard and this is for their hard work today. [The class] is getting much, much closer. I think by the end of the season we’ll be very tight and next year I think you will see a very competitive class across the board.”

Line, a two-time Pro Stock world champion, raced past Alan Prusiensky, Chris McGaha and two-time and reigning world champ Erica Enders in the earlier rounds and his runner-up finish, maintained his position at the top of the championship table.

Andrew Hines posted a perfect .000 reaction time in the final round to defeat Jerry Savoie in the Pro Stock Motorcycle final round. Hines’ 6.866 at 194.94 with the perfect reaction time on his Screamin’ Eagle Vance & Hines Harley-Davidson was enough for a holeshot victory against Savoie’s 6.863 at 194.88 on his White Alligator Racing Suzuki. This is Hines’ fourth win of the season, 46th of his career and third at Brainerd International Raceway.

“I was definitely a little nervous because we came here with the intentions of preparing for the Countdown,” said Hines, the winningest Pro Stock Motorcycle racer in NHRA history. “We put brand new tires on the bike which turned out, in hindsight, to be a very bad decision because the track is so good here. We were battling with the tune up on Friday. We just pecked away at it all weekend.

“We took our chance at it in the final round, put an old tire back on, and it went nice and straight. I was pressing it because I knew I needed an advantage over Jerry.”