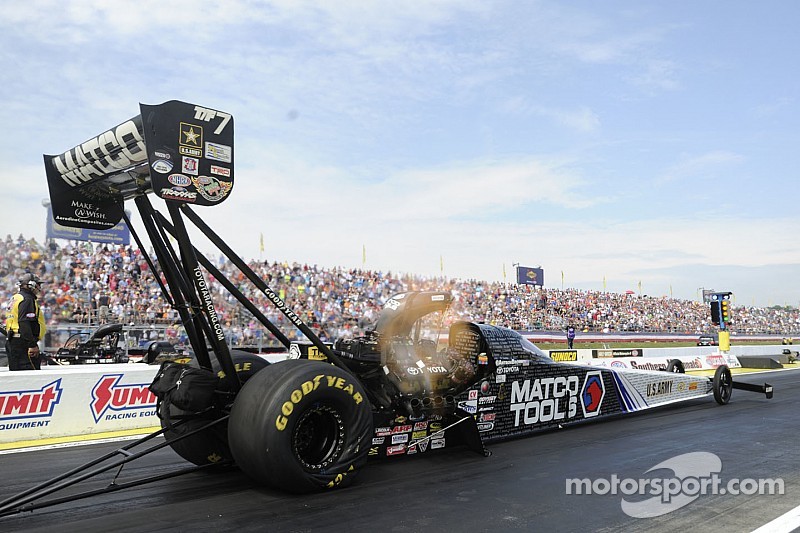 In unseasonably cool conditions, Brown powered his Matco Tools dragster to a track record time of 3.727 seconds at 313.37 mph to lead the class.

In unseasonably cool conditions, Brown powered his Matco Tools dragster to a track record time of 3.727 seconds at 313.37 mph to lead the class. Brown, who won last weekend in Atlanta, is looking for his second consecutive victory and third of the season.

“When we came in here this track was an unknown variable,” said Brown, who has been the No. 1 qualifier twice at Topeka. “My hat’s off to the NHRA and the Safety Safari for getting this track going. Cars haven’t ran here since last October. To have all the track records here just shows the foundation that this track is built on. This track is buttery smooth. We were able to go out there and run some phenomenal times. We were able to put on a great show for the fans and that’s what we love as drivers.”

Brown defeated first-time finalist Leah Pritchett last weekend at Atlanta Dragway to claim his 49th career victory. He’s never won at Heartland Park and hopes to carry the momentum onward this weekend. He said taking the qualifying lead on the first day is a good start.

“We wanted to go A to B on the first lap,” Brown said. “That is the most crucial thing to getting off to a good weekend. The momentum means nothing here because you go from one race to the next race; you go from hero to zero. Once you make that first lap, it sets the tone for the weekend.”

In Funny Car, second-generation racer Head sped to a track record time of 3.967 at 316.15 in his Head Racing Toyota Camry to move to the top of the qualifying order. Like Brown, Head credited NHRA’s track prep as a key component of his career-best elapsed time.

“As long as we can keep going up and down the racetrack it’s awesome,” Head said. “Things are good right now. That could change tomorrow. We haven’t seen air like this in a long time. The most important thing is what NHRA did with this racetrack and how much hard work they put into the starting line. I take my hat off to everyone here. It took a lot of massaging, scraping the rubber and dragging. With the conditions, it was really fast out there.”

Head, who earned his lone No. 1 qualifying position in 2013 at zMAX Dragway in Charlotte, N.C., says his legendary racing father Jim Head, a past winner at Topeka, provided the tune-up for the run.

“I’m just really happy for my father; he’s been doing this for 40 years,” Head said. “Dad is the crew chief and he makes all the calls. I just try to keep it straight. I am shocked that some other folks didn’t run faster and didn’t run to their potential. It isn’t over for sure. If it doesn’t rain tomorrow, it is out there. There’s some really fast cars out here. I am excited for tomorrow. We’ll see what happens.”

Defending Pro Stock world champion Enders powered her Racing In Red Chevy Camaro to a track record time of 6.515 at 211.43 to lead qualifying in the factory hot rod division.

“We’ve had a really good hot rod all year,” Enders said. “We’re taking baby steps to make it run good. This weather is uncharacteristic here for this time of year so it’s cool to capture the record. We’ve got our work cut out for us.”

A two-time winner this season, Enders earned her first career No. 1 qualifying position at this event in 2006. By the end of the weekend she would like to claim her first Heartland Park Topeka victory.

“I am proud of our guys,” Enders said. “The biggest difference for us is we’ve picked it up at 60-foot. I have three really good crew chiefs. They were out there looking at the track yesterday and they made the right calls. The car is leaving nice and smooth with the wheels up and that’s been good. Our cars like it when it’s cool and dry. We thought it might be a little bit faster (in the second session) and we figured we would be able to improve, but the water (humidity) moved in and that’s what slowed it down a little bit.”

Qualifying continues Saturday with sessions at 1:30 and 4 p.m. Sunday’s eliminations are set for 11 a.m.

Tommy Johnson, Jr. looking for first shot at a final round