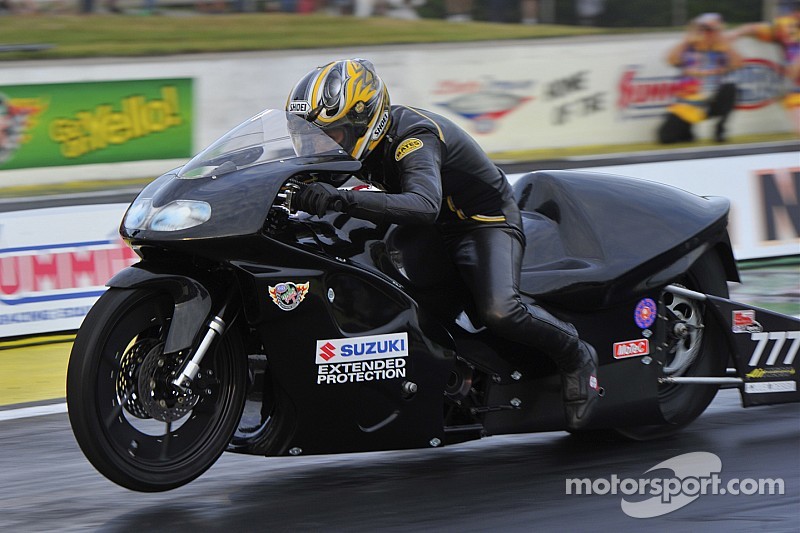 The race is the seventh of 24 events during the 2015 NHRA Mello Yello Drag Racing Series season.

“It was a great day,” said Brown. “For us to come out of the box with a really good, solid lap, we’ve been shooting for that for a long time. We all know that we have our bumps and bruises with our new combination and we just have to work the kinks out of it. We’ve raced well at a lot of the races this year, that’s why we’ve been doing so well in the points, but we haven’t been where we want to be in qualifying.”

Brown has one victory this season, which he earned in Charlotte, and has three career victories at Atlanta Dragway, the last coming in 2013. He is seeking his 38th No. 1 qualifier and second at Atlanta with two sessions remaining.

Defending and eight-time world champion, Tony Schumacher, qualified second with a 3.767 at 324.12 in his U.S. Army dragster. Despite Schumacher’s success, he still seeks his first win at Atlanta. Leah Pritchett, who raced her Dote Racing/Gumout dragster to a 3/792 at 321.81 is third after Friday’s sessions. Steve Torrence and Dave Connolly sit fourth and fifth, respectively.

In Funny Car, Pedregon recorded a performance of 4.010 at 313.95 in his Snap-on Tools Toyota Camry, earning him the top position in Funny Car qualifying.  Pedregon was the No. 1 qualifier at Gainesville in March, but is still looking for his first victory of the 2015 season.

“We had a good two weeks of preparation,” said Pedregon, a two-time Funny Car world champ. “Our season has been better than it shows. We didn’t know exactly what was in store, but we figured we’d have a good weekend. With how it’s going, so far, so good.

16-time world champ John Force qualified second by posting a 4.031 at 317.64 in his PEAK Antifreeze Chevy Camaro SS. Force has seven career wins at Atlanta Dragway, leading the Funny Car category. His last win at the facility was in 2005.

Line led Pro Stock qualifying with a 6.546 at 211.23 in his Summit Racing Equipment Chevy Camaro achieved during the opening session. Line won this event in 2011 and is looking for his second win of the season, having won the season-opener at Pomona. He has two No. 1 qualifying positions this season and 40 in his career.

"It's always a big deal to be No. 1, whether it's your sponsor's race or not," said Line, a two-time world champ. "They don't pay anything for being No.2. My car was really good today. There is more left and I think we can hang on to the spot for Sunday's eliminations. The big thing is that we're No. 1 going into Saturday and now the job is to just figure out a way to stay there through tomorrow." "

Reigning Pro Stock world champion, Erica Enders, sits second. Enders, who was the No. 1 qualifier at this event one year ago, powered her Elite Motorsports Chevy Camaro to a performance of 6.546 at 211.06. Enders’ teammate, Drew Skillman, qualified third with a 6.551 at 211.30 in his Ray Skillman Chevrolet Chevy Camaro. Allen Johnson sprinted to the fourth place spot and was followed by Rodger Brogdon in fifth.

"Who would have thought we'd run like this," Stoffer said. "We were not even prepared to come out this season. We were going to wait until the middle of the year but we found a little bit of money. I'm really enjoying the season. Every weekend is a mystery. We never know where we're going to show up but it's a lot easier to enjoy it when you're doing well."

Jim Underdahl qualified second with a 6.889 at 194.38 on his Suzuki Extended Protection Suzuki. LE Tonglet posted a 6.915 at 193.16 to provisionally qualify third. Eddie Krawiec, the 2014 event winner and Pro Stock Motorcycle points leader, sits in the fourth position while defending world champion and 2014 No. 1 qualifier, Andrew Hines, qualified eighth.

Qualifying continues Saturday with sessions at 12:45 p.m. and 3:15 p.m. Sunday’s eliminations are scheduled for 11 a.m.