BUDDY PERKINSON: “YOU KNOW ANYTHING CAN HAPPEN IN VEGAS”

LAS VEGAS (March 31, 2011) – The first 2011 NHRA event in Las Vegas is on track to begin this weekend, and with it, is 2011 Rookie Pro Stock driver, Buddy Perkinson. The 19-year-old from Prince George, Va. is eager to race his first ever Las Vegas Pro Stock event for Cunningham Motorsports. 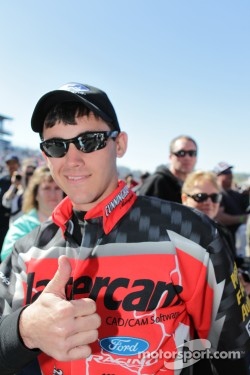 Buddy came up quickly through the ranks, beginning his career at the age of nine in Jr. Dragsters, and on to Super Comp and Comp Eliminator classes.

“The last time I was in Vegas was last year. I drove out for the Vegas national and the weekend after that was the divisional, so I stayed here an entire week and ran two weekends back-to-back. The track is really, really good and the facility is nice. When we came out before, I was pretty much a one man show, so I feel like I’m a little more prepared for the race this weekend. Of course being on the Pro Stock side is a big difference for me,” said Buddy.

The Cunningham Motorsports Pro Stock team recently made a breakthrough by qualifying in both of the first two races of 2011 thus far. Last year, the operation qualified for a total of four events all season, making it apparent that the team is now well prepared to be competitive.

“I know the guys have continued to make changes. We have some more motors back together, but we’re not entirely sure which ones we’re going to run yet because we didn’t get any time to test the past few weeks,” Buddy said. “We were behind on parts for the motors and getting our best pieces freshened up, so we’re a little behind the eight ball in that aspect. We will have a few of our best motors with us, just not sure which ones we’re going to run yet. We’ll play it by ear and see how the weather turns out.”

We’ll play it by ear and see how the weather turns out.

“I’m really excited for the weekend ahead. So far, we’ve qualified two races in a row. Even qualifying is difficult in Pro Stock. As long as we can stay there and continue to be competitive, sooner or later, we’re going to get that first round win that we’ve all been waiting for. It’s Vegas. You know anything can happen in Vegas,” he said laughing.

Also, Buddy has recently become the newest Pro Stock driver among the NHRA bloggers. Buddy’s blog will be a mixture of his everyday life at home in Prince George, Va. and other racing-related adventures he will experience in his first year of Pro Stock. To keep up with Buddy, visit his NHRA.com blog at www.nhra.com/blog/perkinson/.

“As far as being a candidate for Rookie of the Year, I’m really excited about being able to post just a little bit more about me and not necessarily about racing, but stuff that will get people to know more about me and what I do when I’m not at the race track,” Buddy told me.

Allen Johnson to start in no. 2 spot in final eliminations at St. Louis