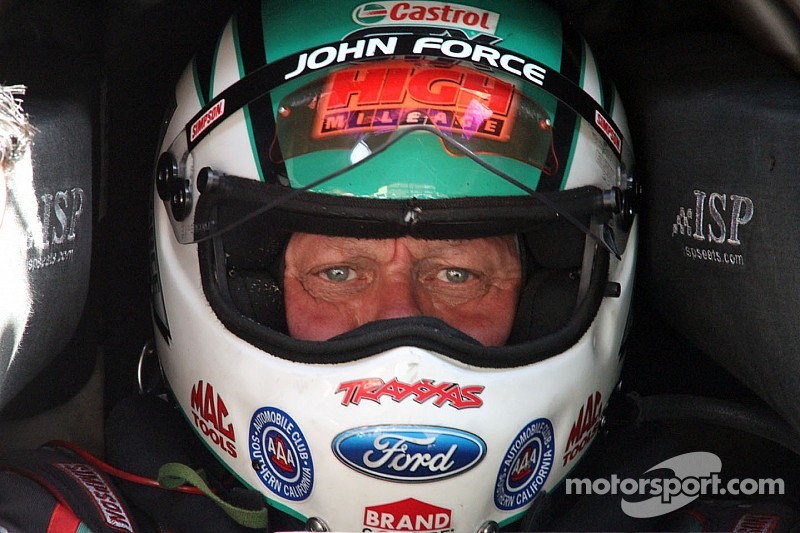 Jimmy Prock joined John Force Racing in 2001, working with second driver Gary Densham as crew chief. Born into the business of NHRA drag racing, Prock began working as a mechanic with his father Tom in the mid-1970s, then went with Tom “Mongoose” McEwen, with John Martin, Scott Kalitta, Dick LaHaie, Cory McClenathan, Joe Amato and then on to JFR.

That’s quite a resume.

Even so, it wasn’t until 2009 that he won his first championship by guiding Force’s son-in-law Robert Hight to the NHRA Funny Car title. Last year, while pretty much in a rut (for him anyway), Force moved teams around and took on the entire crew led by Prock, sending Mike Neff and his group over to work with Hight. The result was Force’s 16th Funny Car championship, Prock’s second, and it looked like the group were in it for the long haul.

As this 2014 Mello Yello Drag Racing Series competition has progressed through the year, Force has stood atop the standings once five-race winner Hight hit a rough spot. As the six-race Countdown to the Championship began following the 60th annual Chevrolet Performance U.S. Nationals, Force led the standings. He didn’t win a race from the Seattle round of the Western Swing in late July but he and Prock were consistently challenging for final rounds and victories. Even as John Force fell to second place behind the surging Matt Hagan (who seems to be Force’s nemesis these days) at Reading earlier this month - and blocking third-placed daughter Courtney Force, on the outside everything seemed to be right in Force’s world.

This morning, as I was walking my dog, the text came through: Jimmy Prock told John Force he was leaving the team at the end of the year; Force told him to go now. So far this season, Force and Prock have combined to win three Funny Car Wally trophies, had seven runner-up results and won the $100,000 Traxxas Nitro Shootout for Funny Car at Indy.

Force joined an already scheduled teleconference to talk about the change, stating that the JFR brain trust, led by Mike “Zippy” Neff, Hight’s current tuner, along with Todd Smith (who tuned Jack Beckman to his 2012 Funny Car title), Ron Douglas (working with Courtney), John Medlen, Daniel Hood and Dean “Guido” Antonelli, amongst others, will figure out who amongst them will take over the tuning of the Castrol Ford for the final two races, after which both Castrol and Ford depart the John Force Racing camp.

Force said he started hearing rumors at the St. Louis race about defections on his team. “I don’t listen to rumors,” he said. He did get calls from a number of team owners, “One being straight up,” saying that they were talking with his crew chiefs. “Now all is fair in love and war,” Force stated, “But I was a little surprised this was happening in the middle of the Countdown. [Still] I’m a big boy; I understand it.”

Force flew from his Yorba Linda, Calif. home to Indianapolis to speak with the members of his team. He said Prock couldn’t absolutely state what his plans were but that he would “probably be leaving at the end of the year.” Force told him he would accept his resignation - but it had to be now. “Jimmy Prock is no longer employed by John Force Racing - I know you think I’m committing suicide, but you know I race from the heart and if his heart is not with me,” it was time for Prock to go.

Force always addresses his people face to face and is still in the Brownsburg area righting the ship. Only his team is affected by this change - at this time - and the tuners and crews for Courtney, Robert and Top Fuel racer Brittany Force remain as they were. For now. It is possible that the crew working with Prock may go with him, “But I hope they stay through the Countdown,” Force said.

Force said Prock knows where he’s going but he wasn’t going to talk about that.

With two races remaining on the docket, Force lies less than two rounds behind Hagan, 36 points in arrears. His daughter Courtney is 72 points back in third and Hight needs to make up 135 points from fifth place.

As a 16-time champion, Force knows what he needs to do: “When you’re in the lead you have a certain style of racing, protective of points. When you’re behind, it’s guns a-blazing. I can’t look at these two races any different. The car doesn’t know the difference, so we set the pace where we’re going, do what we’ve always done - we’ll approach Vegas and Pomona the same way.”

From here he rallies the teams together and sets sights on No. 17. If it isn’t meant to be by this upheaval within his team, well, John Force will keep plugging at it. “I know my brain is wired different from most human beings. I’m free of heart and ready to fight the fight. I can’t be mad about this; we just have to come out swinging, have a good race car and the rest is up to Lady Luck.”