BROWNSBURG, Ind. - - Chad Head, the Al-Anabi Racing director of racing operations, will depart the team to join his father’s business, Head, Inc., it was announced today.

Head joined the Al-Anabi team in 2008 to begin creating the team that debuted in NHRA competition in 2009. He will begin working with his father at the beginning of 2013. 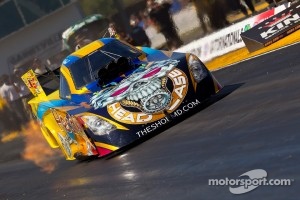 The elder Head has driven a Top Fuel dragster and a Funny Car throughout his career, but the current Funny Car stint began with the 2004 season.

In addition, Chad Head will drive the Head Racing Funny Car in January testing, and if all goes well in testing, drive a limited NHRA Mello Yello Drag Racing Series schedule in 2013.

“I have enjoyed my time at Al-Anabi Racing, and I thank Sheikh Khalid and Alan Johnson for giving me this opportunity,” Head said.

“When I was working with the IRL in 2008 and wanted to get back into NHRA, Alan is the one who gave me the chance, and I’ll always appreciate what he has done for me.

I thank Sheikh Khalid for creating the Al-Anabi team so that Alan had a reason to bring me back. I have really enjoyed working with everyone on the Al-Anabi team including our crew chiefs and all of our drivers, Del Worsham, Khalid alBalooshi, Shawn Langdon and Larry Dixon.

There has always been a special bond between the Head and Johnson families; I’ll always cherish that relationship, and I look forward to it continuing in the future.

“I wouldn’t be leaving this team if it wasn’t for the incredible opportunity my Dad has given me, and I am really excited about working with him in his construction business on a daily basis and running the race team.

Working with Alan these last four years has prepared me to run my dad’s race team, and I appreciate the valuable experience I have gained here. I am looking forward to testing in January and hopefully driving the Head Racing Funny Car next season.”

Langdon will oversee the day-to-day business operations at the team’s Brownsburg, Ind. shop, but during race weekends, Langdon will focus only on his driving duties in the silver Al-Anabi Racing Top Fuel dragster.

“We are very happy for Chad and the wonderful opportunity that has been presented to him, but we are certainly sorry to see him leave our race team,” Al-Anabi Racing team manager Alan Johnson said.

“Chad was the team’s first employee, and he created the foundation for our race team to win two NHRA Mello Yello Top Fuel world championships in four years; he has filled a vital role since our team’s inception.

We are proud of what we have accomplished so far, and we owe a lot of our success to Chad. I know I speak for Sheikh Khalid and everyone else on our team when I say that we wish him all the best in his new opportunity.”

Prior to joining the Al-Anabi Racing Team, Head was the director of operations for the Indy Racing League and earlier worked for the National Hot Rod Association as the manager of event planning.

Prior to that time he worked for three different race teams including Head Racing where he served as the team manager in the 1990s.

Al-Anabi Racing operates out of multiple locations in both the United States and Qatar. In the United States, the Brownsburg, Ind.-based operation is a two-car NHRA Full Throttle Drag Racing Series team that is managed by Alan Johnson Racing.