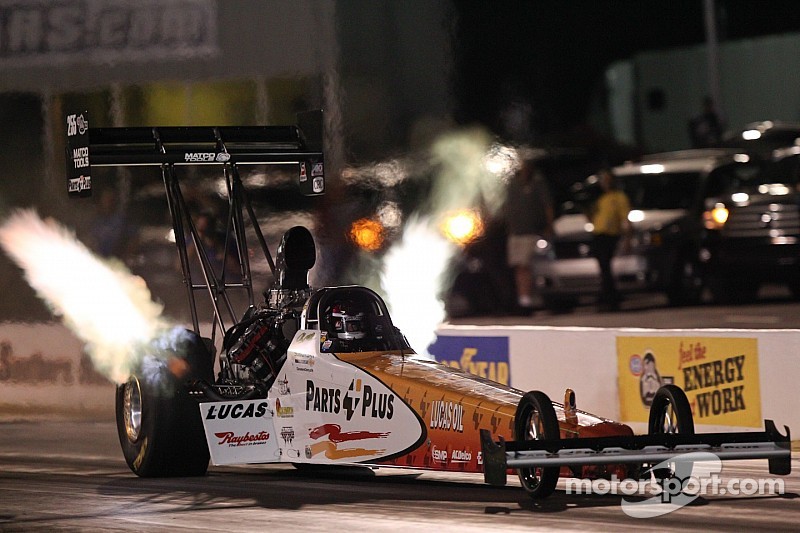 BRAINERD, Minn. — Clay Millican knows where he sits in the NHRA Mello Yello Drag Racing Series Top Fuel points standings. He is also aware it will take an incredible run in the next two races to move from his current 12th position into the top 10 and qualify for the Mello Yello Countdown to the Championship.

In order to complete a magical run over the next two races, Millican would also capture something that has long eluded him in his NHRA career: his first Top Fuel win. That is motivation enough for Millican, who takes a must-win approach into the upcoming 33rd annual Lucas Oil NHRA Nationals, which takes place at Brainerd International Raceway, Aug. 14-17.

“I’m sort of taking on that Al Davis mindset of ‘Just win, baby,’” Millican said, “The car has had its ups and downs, but we’re working real hard on it and I’m confident. We just need to go out there and turn on the win lights. All I’m thinking about is just winning. We may have dug ourselves too big of a hole (for the Countdown), but we just have to win. That will make everything that much better.”

I’m not happy with where we’re at in the points, but I am happy with our team.

Spencer Massey (Top Fuel), Ron Capps (Funny Car) and Mike Edwards (Pro Stock) were last year’s winners of the event that will once again be televised nationally on ESPN2. The race also serves as the 17th of 24 races during the 2014 season and is the penultimate stop in the regular season before the upcoming Countdown to the Championship.

Millican trails J.R. Todd, who is currently in 10th, by 151 points, which means a lot would have to go Millican’s way to earn a playoff berth. But the always upbeat Millican is more focused on continuing to improve his 10,000-horsepower Parts Plus dragster.

The Parts Plus team, owned and tuned by Dexter Tuttle, came together right before the start of the 2014 season, and it has been an uphill battle to find consistency in an ultra-competitive Top Fuel class. Millican and his team, headed by crew chief Jimmy Walsh, has qualified at every event but a rigorous workload hasn’t hampered the team’s ability to make major strides.

“We just haven’t been able to get caught up,” Millican said. “It’s nobody’s fault and everyone has worked incredibly hard. We’ve made a lot of improvements and I feel like we’re getting a lot closer. We had five consecutive runs under power in Seattle and that’s what we like to see. I’m not happy with where we’re at in the points, but I am happy with our team.”

Millican fell in the first round at Seattle to defending Top Fuel world champion Shawn Langdon, but he remains impressed with how far the team has come in a short time. Despite not qualifying better than 12th at any event this season, Millican has advanced to two semifinals and has recorded seven round wins.

The next obvious step is making a late charge, even if that means not qualifying for the Countdown, and racking up round wins and possibly a first NHRA victory.

“My mindset is to keep getting the car to go down the track consistently and under power, and everything else will take care of itself,” Millican said. “We’ve been holding our own and we just have to keep moving forward.”

Doing so is difficult in Top Fuel, which includes a full field of marquee challengers. Leading the way is points leader Doug Kalitta, who won the most recent event in Seattle, while others include Massey, Tony Schumacher, who leads active Top Fuel drivers with three wins at Brainerd, Antron Brown, Brittany Force, Richie Crampton, J.R. Todd, Khalid alBalooshi, and category veteran Steve Torrence.

But Millican can simply look back to last year for motivation when it comes to racing at Brainerd. He qualified No. 1 and advanced to the final round before losing a memorable matchup to Massey in the championship round.

Millican also enjoys the impressive energy and atmosphere from the Brainerd fans, something he hopes to feed on again this year en route to another positive showing at the Lucas Oil NHRA Nationals.

“I love going to race in Brainerd and it’s always a lot of fun,” Millican said. “Last year was an awesome, awesome weekend. We qualified No. 1 and went to the final and ran real well against Spencer, so it was a big weekend all the way around. I love the fans there and that makes it more fun. It’s like one big group outing.”

In Funny Car, Capps took home the victory in Brainerd a year ago, marking his fourth win at the track. But no one owns Brainerd like 16-time and reigning world champion John Force, who has 11 wins at the facility. Both will be challenged from an ultra-competitive Funny Car class that also features Tommy Johnson Jr., points leader Robert Hight, 1992 Brainerd winner Cruz Pedregon, Matt Hagan, Courtney Force, Tim Wilkerson, Del Worsham, and two-time season winner Alexis DeJoria.

Reigning Pro Stock world champion Jeg Coughlin has four wins in Brainerd and has two wins this season. Native Minnesotan Greg Anderson moved to 10th in points with his runner-up finish in Seattle and his fourth Brainerd victory could solidify his position in the championship mix. Pro Stock points leader Erica Enders-Stevens, who has four wins this season, has one career victory at the track while other top contenders are Allen Johnson, Dave Connolly, Jason Line, Vincent Nobile, Shane Gray, Jonathan Gray, V Gaines and Chris McGaha.

Enders-Stevens will have company in the Pro Stock field at Indy: Her husband