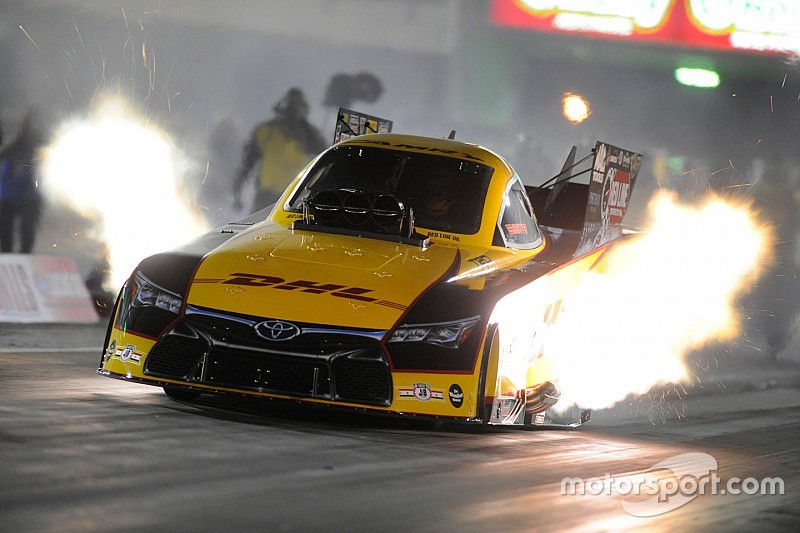 Peter Clifford, who has been with the NHRA since 1997 and was promoted to president on July 1, said his first objective in his new role is to help make the NHRA “a major league sport.”

Clifford, who spoke during Wednesday’s Motorsports Marketing Forum at The Mirage in Las Vegas, said the key to growing the NHRA lies in the sport’s recent TV deal with Fox Sports.

“Our fans deserved better television and we quickly announced – in record time actually – a deal with Fox and it will start in 2016 and we’re going to an absolutely unbelievable package for us. We’re going to 17 of our 23 events will be live,” Clifford said Wednesday at the Motorsports Marketing Forum at The Mirage at Las Vegas.

We’re the most powerful sensory sport on the planet. We’re side by side racing at over 10,000 horsepower each. That’s unbelievable when you think about it

“We couldn’t figure out the formula previously on how to make live events work. Four of those 17 will be on the Fox network. Never in our history have we’ve been on network broadcast. It’s just a huge, huge move for us.”

The struggle to remain relevant

Clifford admitted the California-based drag racing series has faced some important issues of late in attracting new fans and retaining its longtime base.

In addition to the new TV package, the NHRA is also taking its production in-house – another way it hopes to improve on how its product is presented to fans.

“We believe we can sell and tell the NHRA story better than anybody,” Clifford said. “We want to show our viewers at home what it’s like to come to an event. A big part of our events is in the pits – we’re the only sport with open pits – an open-locker room.

“We’re also going to do being a lot of back stories on the drivers. We’ll have bureau in Indianapolis, where a lot of our teams are based, and a bureau in Los Angeles. They will do coverage all week on our teams and educating our fans about the sport, the drivers and the teams both on site and on TV shows.”

New TV deal a step in the right direction

Clifford said in today’s sports landscape to be a “major league sport” it is necessary to have live television and the interaction with fans that comes along with it, including on social media platforms.

Those options were not available when a vast majority of NHRA events were broadcast on a tape-delayed basis.

Clifford said the NHRA is the second-most popular form of motorsports in America but up to now has not been treated that way, both in its TV coverage but also in how it is covered by media.

The NHRA has plenty of marketable attributes, Clifford said, which should be able to attract new fans.

“We are the original extreme sport. We’re the most powerful sensory sport on the planet. We’re side by side racing at over 10,000 horsepower each. That’s unbelievable when you think about it,” he said.

“When you go to an event, you can see it, taste it and more importantly, you can feel it. It’s an experience unlike any other.”