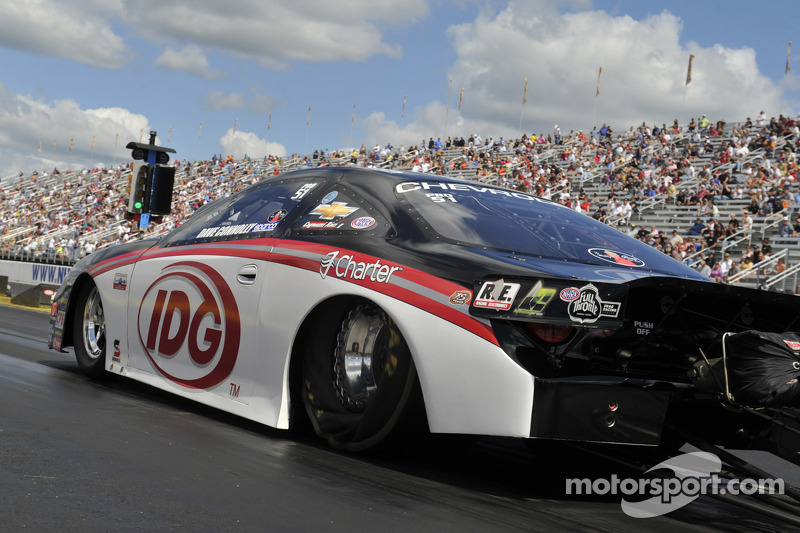 Taking momentum into the Windy City

Dave Connolly drove like he meant it and had a powerful racecar beneath him last weekend in Epping, N.H., and the combination culminated in his first victory of the season. At this weekend's 17th annual Route 66 NHRA Nationals, the 24-time Pro Stock victor sees no reason not to repeat the feat with his Charter Communications Chevrolet Camaro.

After all, the second-generation drag racer and multi-category standout earned the first national event trophy of his career at Route 66 Raceway with a 2002 win in Super Comp, and in 2004 he won the Chicago title in Pro Stock. Connolly has history at the grand, stadium-style racetrack, and so does his family. His dad, Ray Connolly, qualified for the Allstars race slated to take place there this weekend, and he won Super Gas in Chicago last year.

"I love Chicago," said Connolly. "That racetrack has been awesome for us, and I'm excited because I get to spend this weekend with my family. My mom and little brother will be there, and I get to run the COPO Camaro in Stock Eliminator, too. It's going to be a fun-filled weekend, that's for sure."

Now No. 6 in NHRA's Mello Yello Drag Racing Series Pro Stock points and only four marks behind Gray Motorsports teammate Shane Gray in fifth, Connolly is situated nicely in the middle of the top 10 and looking to move up. As part of the powerful and surging Gray Motorsports team, the championship contender is ranked at the very top of ESPN analyst Mike Dunn's Power Rankings for the weekend, and Connolly attributes his success to the group surround him.

"This is a dream team, it really is," said Connolly, who raced Gray Motorsports teammate Jonathan Gray in the final last week. It was the second consecutive final for Gray, and their teammate and Jonathan's brother, Shane Gray, was the No. 1 qualifier in Epping and also at the event held the previous weekend, in Bristol.

"The guys work hard and supply us with the racecars to win a championship," continued Connolly. "You have to take it one round at a time, and this class is brutal. But we have a great team, and they turned the cars around flawlessly and we were able to get the win last weekend. There is a lot of talent in this class, and you have to fight for every round win, but the Gray Motorsports team is very strong. I like our chances."

Charter Communications Chevrolet Camaro Pro Stock pilot Connolly will also return to the seat of the GMPartsNow.com COPO Camaro to compete in Stock Eliminator alongside Jeff Strickland in an identically appearing GMPartsNow.com COPO – the same car and driver combo that won the division race at Bristol Dragway last weekend.

"We've got happy racecars right now, and that makes it a lot of fun for all of us," said Connolly. "Hopefully the success we've had here lately in both categories will follow the Gray Motorsports team right on to Chicago."

B. Force, Hight, A. Johnson and Krawiec race to top after first day of qualifying at Route 66