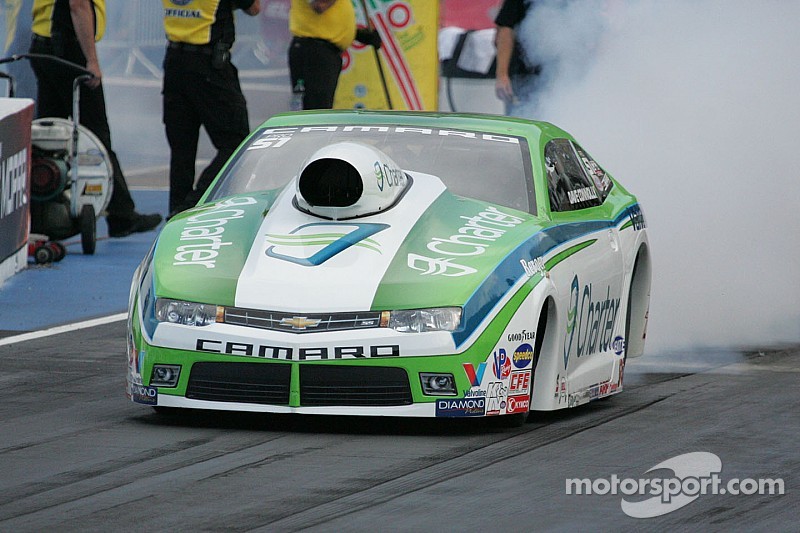 Pro Stock driver puts Indy 'up on a pedestal.'

Long before Dave Connolly got behind the wheel of a Pro Stock car, the NHRA Mello Yello Drag Racing Series star knew the importance of the Chevrolet Performance U.S. Nationals.

With three career Pro Stock victories at Lucas Oil Raceway at Indianapolis, Connolly has also managed to put his own name into the rich history book of the world’s most prestigious drag race, last winning the event in 2012. After not competing at the event a year ago, Connolly has a chance to add to his growing Indy legacy and will chase his fourth victory at the illustrious race at this weekend’s 60th annual Chevrolet Performance U.S. Nationals.

“Even when I was a kid growing up, I knew that Indy was the race everybody put up on a pedestal,” Connolly said. “Even though I'm of a younger generation, I still grew up in an era where that was the hugest race of the year. Other than the world championship, that's the trophy you want in the trophy case. One of my first national events was getting to run Super Comp at Indy, and I thought that was the greatest thing ever."

Shawn Langdon (Top Fuel), Robert Hight (Funny Car) Mike Edwards (Pro Stock) and John Hall (Pro Stock Motorcycle) were last year’s winners of the event that will once again be televised on ESPN2 in more than 10 hours of coverage. It is the 18th of 24 events during the 2014 season and the final race of the regular season before the Mello Yello Countdown to the Championship playoffs begins.

Currently in fifth place during the 2014 season with one victory and two final round appearances, Connolly feels good about how his Charter Communications Chevy Camaro has performed. But things have a chance to get even better for the 23-time Pro Stock winner heading into the Countdown based on his previous history at the Chevrolet Performance U.S. Nationals.

Despite the added pressure and spotlight the race brings, Connolly has always found a comfort level at the event, leading to some of the most impressive performances of his career.

“I don't know how to explain it, other than to say that every racer has certain tracks where they tend to do well,” Connolly said. “That's one of those tracks that has come to our liking, and that definitely helps you perform on Monday. I feel very confident in the car, and I think we have a really good handle on it. Everything is starting to click at the right time and it should be a very fun and exciting Countdown.”

Three of Connolly’s finest moments came during the Chevrolet Performance U.S. Nationals, including his first Indy win in 2007 that came in the middle of an incredible five-race winning streak. Connolly followed that by repeating at Indy in 2008, picking up his third win at the event in 2012 in what was only one of a handful of events Connolly competed in that year.

“There are certain things at each race that you can definitely pick out and remember,” Connolly said. “I remember the first year we won Indy, it was the right place-right time type of deal and we hit on something in our set-up that was a little ahead of our class. We had the field by four- or five-hundredths, and I had it in my mind that all I had to do was let the clutch out on time and we were going to win the U.S. Nationals. It played out, and we did. We won. Another Indy that stands out was in 2012, crewing for Erica [Enders-Stevens], running her in the final and beating her. That's something I'll never forget.”

Another memorable performance would give Connolly plenty of championship momentum heading into a loaded Pro Stock class headed by current points leader Jason Line. Connolly’s quest for a first championship would also be heightened should all three Gray Motorsports cars qualify for the Countdown.

Shane Gray and Connolly have already clinched spots, while rookie Jonathan Gray currently trails Greg Anderson, a six-time winner at the Chevrolet Performance U.S. Nationals, by 32 points for the final spot. Other championship contenders in Pro Stock include three-time Indy winner Jeg Coughlin, Enders-Stevens, Allen Johnson, Vincent Nobile, V Gaines and Chris McGaha, but Connolly’s hope is that his team comes out of Indy with three spots in the Countdown.

“Myself and Shane are locked in, but for Jonathan it's going to take a very healthy Monday to get him around Greg,” Connolly said. “Part of the goal for us when Jonathan started driving was to get him in the top 10, and he missed a few races at the beginning of the year but so did Greg. They are in the same boat, and they're both fighting hard. Jonathan is just a round and a half out, so anything can happen."

Robert Hight, who qualified for the Countdown a year ago in dramatic fashion by taking his third Chevrolet Performance U.S. Nationals win, has been the class of the field in Funny Car this season with five victories in his Auto Club Ford Mustang. New points leader John Force, who is riding a streak of five consecutive final rounds, will look to tie Ed McCulloch’s Funny Car record of five wins at the event, while other challengers include Ron Capps, Matt Hagan, Courtney Force, Cruz Pedregon, Del Worsham, Alexis DeJoria, Tim Wilkerson and Tommy Johnson Jr.

In Pro Stock Motorcycle, points leader Andrew Hines has had a dominating season and will look to follow up his 2012 Chevrolet Performance U.S. Nationals victory. Teammate Eddie Krawiec has yet to win in Indy but sits second in points while other standout competitors in the two-wheeled category include reigning champion Matt Smith, Angie Smith, Michael Ray, Scotty Pollacheck, Hector Arana Jr., Hector Arana, Steve Johnson and John Hall.

Another Mello Yello Series event also will be completed during the Big Go: the rain-delayed Lucas Oil NHRA Nationals from Brainerd, Minn. John Force and Ron Capps will decide the Funny Car final round during the U.S. Nationals third qualifying session on Saturday evening at approximately 8:15 p.m. The Brainerd Pro Stock semifinals will be run during Saturday's third qualifying session at approximately 6:30 p.m. Line will take on Dave River and Vincent Nobile will face Jeg Coughlin. The two semi winners will decide the Brainerd Pro Stock final on Sunday during the event's fourth pro qualifying session at 11:30 a.m.

NHRA will also conduct official presentations to honor six of the most iconic moments in the history of the Chevrolet Performance U.S. Nationals in the Hot Rod Junction Friday-Sunday of the weekend. On Sunday of race weekend “Big Daddy” Don Garlits will reenact his famous beard shaving scene that followed his triumphant 1967 victory and the “Indy’s Winningest Drivers” presentation, a ceremony honoring Schumacher, Bob Glidden and Garlits, also will take place; on Saturday Kenny Bernstein will be honored for becoming the first double-up winner at Indy, Shirley Muldowney will look back at her Indy memories including her 1982 victory, one she called the greatest victory of her outstanding Top Fuel career, and the 1978 Funny Car final where Tom “The Mongoose” McEwen defeated Don “The Snake” Prudhomme will be remembered; on Friday the harrowing 1970 Top Fuel final between Jim Nicoll and Prudhomme will be revisited.

A special Monday edition of the SealMaster NHRA Track Walk also will take place prior to final eliminations, where many of the sport’s most celebrated drivers will walk alongside fans down the historic dragstrip. Fan-favorite Cacklefests and vintage racecars on display in the Hot Rod Junction, along with several autograph sessions featuring the legends of the sport as well as today’s biggest stars will be featured throughout each day of the event. On Friday, a special fireworks show will close out the day’s racing.