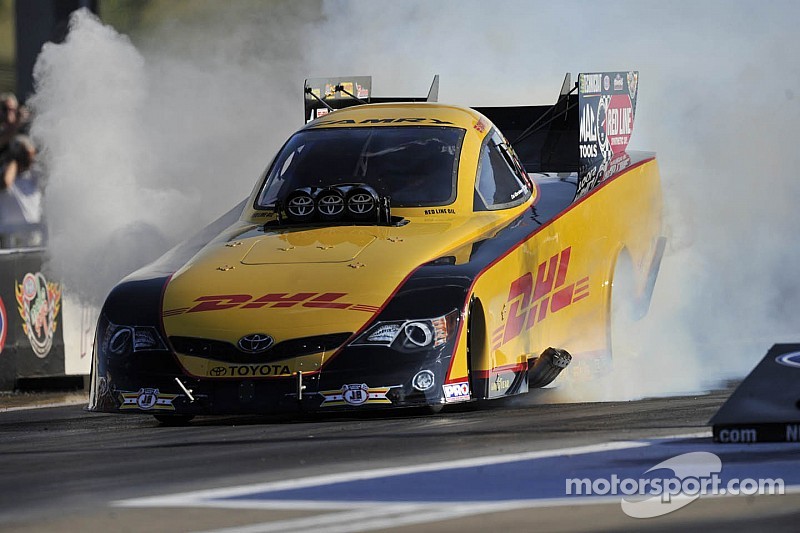 A disappointing three-race stretch on the NHRA Mello Yello Drag Racing Series Western Swing could have left Del Worsham frustrated entering the key point of the year. Instead, the Funny Car standout is eager to return to action and get his 2014 season turned around at the perfect time.

Worsham will have a chance to reverse his recent fortunes at this weekend’s 33rd annual Lucas Oil NHRA Nationals at Brainerd International Raceway. After first-round losses at each of the three stops during the NHRA Western Swing and with the Mello Yello Countdown to the Championship swiftly approaching, Worsham knows improved results are crucial in his 10,000-horsepower DHL Toyota Camry.

But the good news is Worsham seems motivated as ever to get the desired results for his Kalitta Motorsports team.

“After the results of the Western Swing, I’m very motivated to get back out there,” Worsham said. “The DHL Toyota Camry is a much better running car and our team is much better than our results have shown this summer. I believe we will show that we are much better in Brainerd. I think by having a week off we can regroup by going back and reflecting on the places where we’ve been lacking. Plus, a little rest after a long spring and summer doesn't hurt anyone.”

Spencer Massey (Top Fuel), Ron Capps (Funny Car) and Mike Edwards (Pro Stock) were last year’s winners of the event that will once again be televised nationally on ESPN2. The event is the 17th of 24 races during the 2014 season and is the penultimate stop in the regular season.

Brainerd isn’t a must-win scenario for Worsham, but a strong a performance is necessary and the former Top Fuel world champion certainly wouldn’t mind getting his first-ever victory at the track.

It would also position Worsham nicely heading into the Chevrolet Performance U.S. Nationals and the Mello Yello Countdown to the Championship playoffs. Since finishing as the runner-up in Englishtown, Worsham has dropped from fourth to ninth in points, leading 11th place Jack Beckman by 63 points, and has just one round win in his past four outings.

After edging into the Countdown a year ago thanks to a clutch performance at the Chevrolet Performance U.S. Nationals, Worsham would like to avoid having to repeat that scenario. That means putting together a strong weekend in Brainerd, where Worsham has a number of great memories even without winning at the track.

“A couple of events stand out to me when racing in Brainerd,” Worsham said. “In 1991, we made the Big Bud Shootout there by the skin of our teeth. That was a special event held in Indy and to qualify for the event it was based on qualifying points for the previous events position starting at Brainerd the prior year. Well, I didn't start until the beginning of 1991 so we were behind quite a few races.

“The scenario was Tom Hoover was seeded in the No. 8 and final position and had to qualify in the bottom three, and we had to qualify in the top three. We ended up No. 1, and he ended No. 16 so we made the prestigious event. Also, the 2000 event when I believe we qualified near the top and lost in the semifinals after posting low ET of every round. It was a tough loss, but one I will never forget against John Force.”

Force has an incredible 11 wins at the facility, the most for one driver at any NHRA track and will be one of Worsham’s chief challengers. Other Funny Car standouts include defending winner Capps, who has four Lucas Oil Nationals wins, points leader Robert Hight, Tommy Johnson Jr., Cruz Pedregon, Matt Hagan, Courtney Force, Tim Wilkerson and two-time season winner Alexis DeJoria.

It makes for a loaded Funny Car field but that challenge is nothing new for the veteran Worsham. At this stage in the season he is solely focused on positioning his team for a possible championship chase.

Perez has made "progress" in sorting Formula 1 future

Perez has made "progress" in sorting Formula 1 future