What is Don Schumacher Racing doing to bring the best mechanical talents from school to the top of the tree?

“We are always looking to add skilled and ambitious people to the DSR organization,” Schumacher acknowledged. The association with Western Tech began through DSR’s Matco Tools partnership; Schumacher now expands an internship program started during last year’s Western Swing and extends the program to the shop environment. 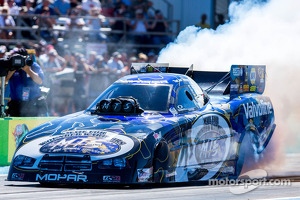 As part of the partnership, DSR and WTC are renewing and expanding the internship program; this extension began with the Bristol, Tenn. race, No. 10 of 24 contests on the Mello Yello tour. Four students have been working with the teams at race sites and at the shop in Brownsburg. DSR will host four more interns for the three-week Western Swing of Denver, Sonoma and Seattle, which begins July 18th.

A third group of WTC interns joins DSR for the first four races of the Countdown to the Championship, a six-race battle for titles in Top Fuel, Funny Car, Pro Stock and Pro Stock Motorcycle that begins in Charlotte, moves to Dallas, St Louis and Reading, Penn. before culminating at Las Vegas and Pomona, where Schumacher’s regular staff take over for the penultimate and final races.

Jack Werner, WTC director of automotive technology, heavy & light duty diesel technology and performance tuning is, obviously, excited about the program. “Our partnership with Don Schumacher Racing provides our students the opportunity to train with the best of the bet in the highly competitive world of NHRA Mello Yello Drag Racing. The teamwork, attention to detail and technical expertise learned by actively participating on a DSR team is training a student can’t receive anywhere else in the world.”

To accentuate the partnership between DSR and WTC, and in addition to Western Tech branding on five of seven DSR race cars, a quarter panel of Beckman’s Dodge Charger R/T Funny Car will sport the school’s logo at seven races, including upcoming venues of Sonoma, Seattle, Brainerd, Indianapolis and St Louis.

Don Schumacher knows where the future mechanics he needs are coming from: he’s training them himself.