LAS VEGAS --- In order to get a Nitro Funny Car from the starting line to the finish line under power it is estimated that over a million things have to go right. To ruin a perfectly good run only one thing has to go wrong.

Today Mike Neff, driver and crew chief of the Castrol GTX Ford Mustang, was on the wrong side of that equation in his second round match-up with Full Throttle point leader Jack Beckman.

With the chance to knock out the point leader Neff’s Ford Mustang broke a $5 part, a clutch hydraulic fitting, and the result was tire smoke and round win for Beckman at the 12th annual Big O Tires NHRA Nationals. 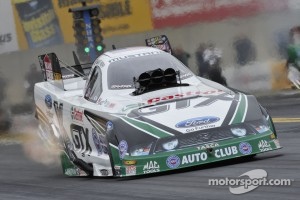 “Losing that round was devastating. You hate to lose a championship that way. I will never make excuses and I will congratulate the champion but I am not giving up.

We are going to head to Pomona and give it our best,” said Neff. “My Castrol GTX Ford Mustang has been running awesome since Reading. It was just a mechanical deal today at the worst possible time.”

Neff’s championship dreams are not over by a long shot but he will need to be at the top of his game at the Auto Club NHRA Finals in Pomona in two weeks. Beckman and Capps met in the finals today with Capps taking the win.

Going into the final race of the season Neff trails Beckman by 88 points and Capps by 84 points. If Neff can get his deficit below 80 that would equate to four rounds of racing.

He would need a repeat of the Mac Tools US Nationals when Capps and Beckman both exited in the first round and he went on to win.

Neff came into Sunday’s eliminations as the No. 2 qualifier on the strength of his 4.070 second run in qualifying. In the first round he outran Jeff Arend with a strong 4.118 second pass on a warm track.

He did not have lane choice in the second round against Jack Beckman but he was able to watch teammate Courtney Force get a second round win in the right lane to give him the confidence in the lane integrity.

Neff left on Beckman but the failed part spelled doom for the two-time Mac Tools US Nationals winner.

Courtney Force had a good race weekend overall in the city of Las Vegas for the second-to-last race of the NHRA Full Throttle Drag Racing series season.

The top “Rookie of the Year” contender for Auto Club’s Road to the Future award qualified in the No. 6 position and picked up three qualifying bonus points before eliminations began on race day.

“My goal this season as a rookie driver was simply to learn and grow and hopefully qualify for every race. I can honestly say that we have been successful in achieving that goal.

My team was a new team this year and they have worked hard at each and every race; getting us a win in Seattle and getting the car qualified all season. I know I have learned a lot and am still learning. That will never stop,” said Force.

The Yorba Linda, Calif., native sent both Jim Head and Paul Lee home before losing a major match-up to Jack Beckman as a result of her first and only red-light start of her Funny Car career.

“I was just under a lot of pressure on that last run against Beckman. I was trying to do the best I could as a driver to get that win light.

I wanted to leave on him, out run him and just do whatever I could to win and help my teammate Mike Neff in the points chase. Obviously the red light came on. I didn’t plan on that, but it’s part of the job; it’s racing,” said Force.

She had a consistent car all weekend and averaged a 4.129 ET across the first three elimination rounds on Sunday. Beckman’s tire-smoking effort against Force handed him an average of 5.189 at the same point.

“I think we have a great race car. I know we do because we’ve proven that. I was off and my guys were right on so I feel bad to let my team down.

That happens sometimes in this sport and it’s something all drivers have to accept. It’s definitely part of the journey in being a long-term, successful driver.”

“We’ll come back out next weekend and try to do some damage and maybe move up in points. We moved up one spot this weekend so hopefully we can inch up there in Pomona for the finals,” said Force.

In the opening round No. 3 qualifier Robert Hight was squaring off with Paul Lee who was driving Gary Densham’s Funny Car.

Hight and Lee both launched together by at about 400 feet his Auto Club Ford Mustang went up in smoke and ended his day at The Strip at Las Vegas Motor Speedway.

“We are going to test tomorrow and get this Auto Club Mustang ready for Pomona and the off season. We have eight more possible runs plus however many we get tomorrow in testing. Today was a tough day.

We made a great run in qualifying in that last session and I thought we had everything squared away. We are not going to hang our heads.”

Hight won the spring event here and was hoping to become just the 6th driver to double up in one season at The Strip.

John Force didn’t get qualified until the final qualifying session on Saturday. As the No. 10 qualifier Force was set up to race points leader Jack Beckman in the opening session.

He was relegated to the right lane which at the time was thought to be the suspect lane for Funny Cars.

Force’s Destination Force/Castrol GTX HIGH MILEAGE Ford Mustang responded by making the best run in the right lane of the opening session a solid 4.152 second run but Beckman was a little quicker to the finish line, 4.115 seconds.

Force had a good starting line advantage with his reaction time advantage of .076 to .090.

At the end of the day Force evaluated his whole team’s effort and with the confidence of a true champion did not concede anything to his opponents but rather praised his team’s efforts.

“Trying to come back from behind is tough. A broken part got Mike Neff. Courtney was fighting like drivers are supposed to do. She did a great driving job all weekend in that Traxxas Ford.

Nobody can tell me more about a red light. It just happens. It’s good to get it out of the way. We’ll go into Pomona with a clean slate,” said John Force.

“Robert, he’s struggling. We’re going to stay and test; all of our teams. The attitude around here is what it is. But before the night is over we’ll have a team meeting and get ready for Pomona because it isn’t over yet.

It doesn’t look good. We’ve got a long shot. It may be feasible. Maybe we need a national record and all the bonus points we can get.

Maybe we need someone over there to not qualify. I don’t give up until the numbers say it and if they say it now then we’ll just have to get ready for next year.”

Coughlin Jr. knocks out Anderson before bowing to points leader Johnson on finals