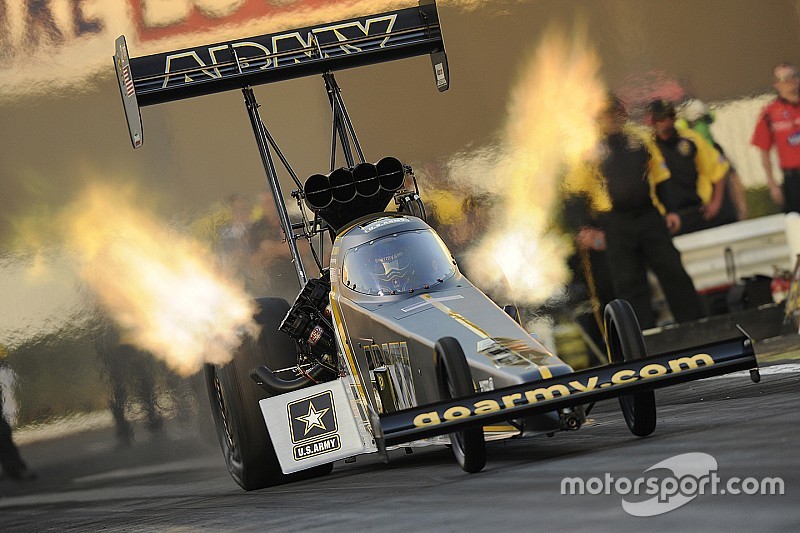 A victory at a race where Schumacher has never had the ultimate success would go a long way into jump-starting his quest for a ninth world championship.

It is the only track where the ultra-successful Schumacher has not won during a standout NHRA career that includes 80 total victories, and now he finds himself searching for a victory to get his 2016 season on track.

It has been a slow start for Schumacher in his 10,000-horsepower U.S. Army dragster, falling short at tracks where he has previously dominated through the first six races of the season. It is hardly panic time for Schumacher, but a victory at a race where he has never had the ultimate success would go a long way into jump-starting his quest for a ninth world championship.

“It would be awesome,” said Schumacher, who is currently seventh in points. “We’ve got a great race team that knows how to win races. Probably because the car is not performing, I’m performing better. Now if that car comes around and I still do my job, we might have a winning combination. It would be great to win this one. We’ve always said that Atlanta has never been our focus because it’s the middle of the season. It’s not a high-pressure thing, but we’re gaining high pressure now because we need to get into the (Traxxas Nitro Shootout). There’s only a few spots left. Maybe that’s exactly what we need to win.”

Antron Brown (Top Fuel), Tim Wilkerson (Funny Car), Jason Line (Pro Stock) and Hector Arana (Pro Stock Motorcycle) were last year’s winners of the event at Georgia's House of Speed. The race will be televised on FOX Sports 1 with qualifying shows on Friday and Saturday and three hours of finals coverage on Sunday. It the seventh of 24 events in 2016 and Schumacher is still searching for that breakthrough moment this season.

He has not advanced out of the second round in what has been an extremely competitive Top Fuel season, but Schumacher can sense a change in momentum. The team, led by standout crew chief Mike Green, has made an abundance of changes, ones that all parties involved believe will lead to impressive results. It hasn’t happened yet, but Schumacher has managed to stay patient knowing what the future could hold.

“I feel like that this has been a long dry spell, longer than we’re used to by far,” Schumacher said. “But after the last race, the changes we’ve made really are starting to show progress. If we continue on the path we were on (in Houston), we’re eventually going to have our old race car back. Hopefully the sacrifices we’ve made up to this point over the last 20 races will pay off. We’ve made some big changes and if they work like (crew chief Mike Green) is hoping it is going to be a great race car.”

Schumacher will gladly take the minor setbacks and struggles if there is a big payoff at the end. If history is any indication, Schumacher will be ready to deliver a clutch performance when it is needed. The performance of his car this year has been on par with the rest of the talented class, but Schumacher hopes the changes that have been made lead to noticeable improvement in the near future.

“You’re watching a handful of cars that are fairly equal and to be the great at the end you have to be better than them,” Schumacher said. “We need to get not only caught up, but hope the gamble we took pushing what we think will be successful pays off. We’ve always been there at the end and that’s because we fight through the adversity. We’re very good at that.

“We understand that to get to the top you have to think outside the box. Everyone else knows how to be fast, you have to know how to be faster. That’s a sacrificial thing. You have to be willing to spend a little time in the uncomfortable zone of getting your (butt) whipped every week to get to that position.”

The early defeats have Schumacher motivated and he will head to Atlanta Dragway as determined as ever. Standing in his way is a talented field, including Don Schumacher Racing teammate, defending race winner and defending world champion Brown. Other class stars include points leader Brittany Force, who has two wins this year, three-time event winner Doug Kalitta, who won in Houston, Terry McMillen, Leah Pritchett, who won in Phoenix, Winternationals winner Steve Torrence, Richie Crampton, Clay Millican, J.R. Todd and Shawn Langdon.

It’s a formidable field, but Schumacher feels confident he can compete for a first Atlanta victory.

“The cars that have won are very good cars, we’re just not in there doing what we need to do to knock them down at different times of the race,” Schumacher said. “Nowadays, you have so many cars, that’s why you’re going to see the winners spread out. It’s not just one or two cars, they’re all really good.”

In Pro Stock, Line outlasted his Summit Racing Equipment Chevrolet Camaro teammate Greg Anderson in the 2015 final in Atlanta. This season, Line and Anderson have dominated thus far in the redesigned factory hot rod class, splitting the first six races.  Line has three of those wins and the points lead, but the competition will be tough in Atlanta. Jeg Coughlin and Allen Johnson are the only other two active drivers with wins at Atlanta Dragway, while two-time and defending world champ Erica Enders, Drew Skillman, Bo Butner, Shane Gray, Vincent Nobile and Chris McGaha are also expected to make a push for the Wally at Atlanta.

The Pro Stock Motorcycle category will hit the track for the third of 16 events this season. Eddie Krawiec is the current points leader and will look to hold off a talented field that boasts plenty of championship level talent. That includes teammate and reigning world champion Andrew Hines, a two-time Atlanta winner who won last weekend in Charlotte, and three-time world champ Angelle Sampey, who has four wins at the track. Others gunning for the Wally include alligator farmer Jerry Savoie, 2011 event winner LE Tonglet, Hector Arana Jr., Chip Ellis, Hector Arana Sr. and 21-year-old rookie Melissa Surber.

The race will also feature plenty of thrilling action in the NHRA Lucas Oil Drag Racing Series and the NHRA J&A Service Pro Mod Series, which makes its third stop of 2016.

Beckman, Kalitta, Anderson And Sampey sprint to No. 1 qualifiers at NHRA Southern Nationals