Elite Motorsports, Enders-Stevens back on track 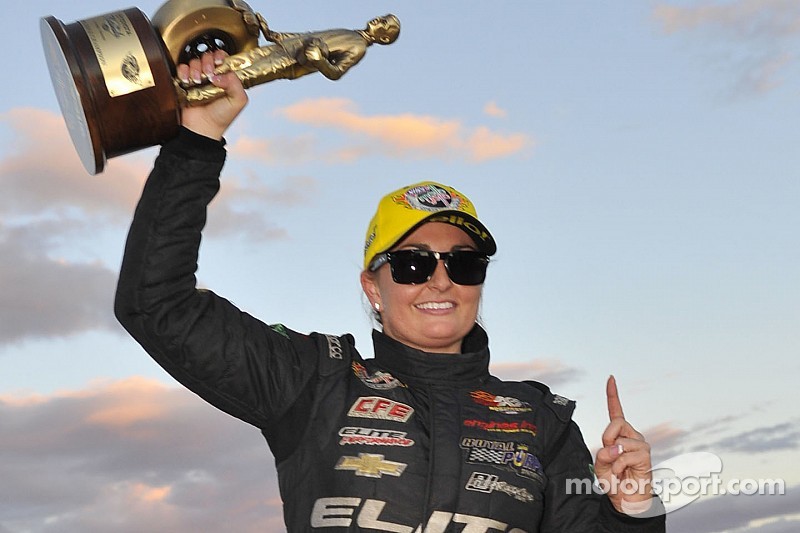 Elite Motorsports and Erica Enders-Stevens have adapted to some new regulations in 2015, and have already found themselves with a Wally in hand.

At the start of the 24-race NHRA Mello Yello Drag Racing Series season, reigning Pro Stock champions Elite Motorsports with driver Erica Enders-Stevens looked like they were behind the eight-ball. Accustomed to being at the front of the grid, going rounds and generally whipping their adversaries, Elite was having trouble adapting to two new elements of competition in their class.

NHRA had changed fuel suppliers from VP to Sunoco; Goodyear had introduced a new rear tire that required less bed-in time than the older, more familiar tire for the team - and every other team in the Pro Stock paddock - had been using for nearly a decade. Some folks adapted easily to these two changes; Elite Motorsports did not.

It took a few races to learn the properties of the fuel (and how it affected engine tune-ups) and the nature of the tire, but by the time the tour arrived in Las Vegas, the site of two NHRA professional races each year (one in springtime, the other customarily near Halloween), Elite and Enders-Stevens had caught up. Oh, never mind - they passed everyone at Vegas, winning the K&N Horsepower Challenge race within the race and the event title as well. For the second consecutive year.

Fast forward two weeks to Royal Purple Raceway, Houston, Texas native Enders-Stevens home track. The first female to win NHRA’s Pro Stock championship, Enders-Stevens returned to the site of a 2014 victory at this track and did it again. “I didn’t think anything could top winning here a year ago,” she said, “but this just might have done it.”

Enders-Stevens ran her car in tribute to Lupe Tortilla Mexican Restaurants, whose owners Stan and Sheila Holt have supported her racing efforts since her Jr Dragster days. “They are like family to me; to win this one for them was over the top.”

This weekend’s second (third if you count the non-points K&N Challenge victory) of the 2015 season (and 14th overall) didn’t come easily for the team, who had to change engines between their second-round victory over Vincent Nobile and semi-finals quashing of Jonathan Gray before taking the final round win from Chris McGaha.

Guys in the garage pull one off

“We had a complete engine change before racing Jonathan. We went to warm up and realized there was a big problem with the motor. There were 10 minutes until we needed to be in the staging lanes,” Enders-Stevens related, “and I thought we were done. The guys got after it and pulled it off - they are unbelievable.”

As is customary in drag racing, crews from other teams pitched in to help Elite get their engine swap done in time. “That’s what’s special about drag racing; we all want to beat each other on the racetrack but we’ll do anything to help the team you’re about to race if they need it.”

It’s always said the good, hard work is what makes good teams great in any form of sport. This is especially true in drag racing, where condition changes are rampant and keeping up with any type of change in engine, chassis, tire and even fuel requires nose-to-the-grindstone concentration. Elite Motorsports has put together a grand team that has no qualms about working overtime to gain winners’ Wally trophies and championships.

From owner Richard Freeman, who sets the tone for the entire enterprise, to crew chiefs Rick and Rickie Jones and their entire working staff for Erica-Stevens, rookie Drew Skillman and, this particular weekend Freeman himself, everyone appears focused on getting to that famous quarter-mile finish line first. Even if it means many man-hours trying to come to grips with new strictures in the class or a 10-minute engine change.

“I credit Richard for putting together an awesome group and constantly motivating them to push themselves every race,” Enders-Stevens proclaimed.