Enders-Stevens, Brown and Hight race to victory at SpringNationals

Enders-Stevens faced Allen Johnson in the Pro Stock final, winning on a holeshot with a 6.594-second pass at 210.60 mph.

BAYTOWN, Texas– Erica Enders-Stevens drove to victory in Pro Stock Sunday in the O’Reilly Auto Parts NHRA SpringNationals, notching her second win of the season and the 99th by a woman in the history of the NHRA Mello Yello Drag Racing Series.

Enders-Stevens faced Allen Johnson in the Pro Stock final, winning on a holeshot with a 6.594-second pass at 210.60 mph. Johnson, the 2012 Pro Stock world champion, ran a 6.588 at 210.28. Even though Johnson ran the faster elapsed time, Enders-Stevens’ superior reaction time enabled her to keep her slim lead the whole race.

“My team’s been really awesome,” said Enders-Stevens, driver of the Elite Motorsports Chevy Camaro. “I’ve had a really consistent race car. That’s what it takes Sundays, consistency. We had to make last second transmission change and go through the gears to make sure everything was right.” 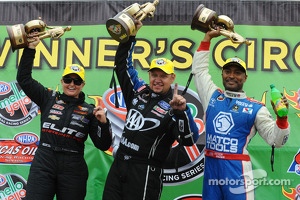 The win was Enders-Stevens’ eighth career victory and her first in Houston. Enders-Stevens, the current Pro Stock points leader and the only female in Pro Stock history to lead the points, has enjoyed her quick start to the season but knows that she must keep it up to remain atop the Pro Stock class.

Johnson, the 2012 Pro Stock world champion, was the No. 1 qualifier at the event and reached his third final of the season. With two wins on the season at Phoenix and Gainesville, Johnson leaves Houston second in Pro Stock points.

“I had high expectations coming into this weekend because I got my first win here,” said Hight, who won his 32nd career race. “[Crew chief] Mike Neff has owned this place, and we came here on kind of a roll after four straight finals. Dating back to Indianapolis, that’s 13 final rounds in a row for John Force Racing in Funny Car, and some of those have been John and me together in the final."

Hight struggled during Friday’s qualifying session not completing a pass. The team rebounded and Hight’s car went on to be the quickest Funny Car in the last six rounds of competition.

“It was like we didn’t show up on Friday,” Hight said. “It was horrible. We just totally missed it, but I never lost faith in my team. They showed confidence that we were going to get them tomorrow. On Saturday, we went out there and ran .07, .08, and then we went .07, .07, .07 before the final. Do you know how hard it is to do that in one of these cars? There are so many variables. It’s hard to make that many consistent runs in a row.”

With the win, Hight expands his points lead to 122 over John Force Racing owner and teammate John Force.

Beckman, the 2012 Funny Car world champion, was appearing in his first final since St. Louis last season. The Infinite Hero Foundation Dodge Charger ran a respectable 4.176 at 308.43 in the final but it just wasn’t enough to top Hight.

In Top Fuel, Brown notched his second straight win of the season with a 3.793 pass at 317.72 over Khalid alBalooshi.

“I feel like we have a class-A, true all-star team," said Brown. "All the guys can execute under pressure. When we have a problem, we’re able to fix it and make it better for the next round."

Brown’s win over alBalooshi , the 44th victory of his career, was the second straight race where the Matco Tools dragster beat an Al-Anabi Racing driver. Brown defeated last year’s Top Fuel world champion Shawn Langdon at the NHRA Four-Wide Nationals at the last event in Charlotte.

“We have a lot of respect for the Al-Anabi guys," said Brown. "You have to beat them to contend for the championship because it goes through them. We get up for that challenge whenever we race them. Any time we beat them, it’s like hitting the jackpot. There are a lot of good teams out here, and we don’t take anybody lightly."

Brown took over the Top Fuel points lead from Doug Kalitta and leaves Houston with a 37 point advantage. Brown has also reached seven of the last 10 finals dating back to last season, winning five of them.

Torrence, Worsham and Johnson secure no.1 qualifiers at the SpringNationals

The 21-time NHRA championship-winning team John Force Racing will start the 2021 NHRA Camping World Drag Racing Series with next month’s opening round of the season.