Brainerd, Minnesota (August 19, 2012)—After enjoying a quick and consistent car all weekend-long, Alexis DeJoria, driver of the Kalitta Motorsports Tequila Patrόn Toyota Camry Funny Car, suffered an unfortunate first round loss to John Force after what can only be described as a wacky round, and a unique learning experience for the first-year Funny Car driver. 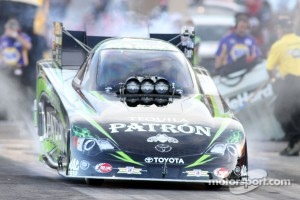 In their fifth matchup of the season, the rookie and veteran drivers pulled up to the line ready to battle it out. As he has done previously when matched-up against the black-and-green machine, Force staged deep, but this time ended up red lighting (foul start).

His ‘jumping the gun’ error caused DeJoria to react and red light as well, although at that point she had technically won the round due to the ‘first or worst’ NHRA rule. Unaware that she had won the round, DeJoria continued to go for it, pedaling the car as it smoked the tires and went on a wild ride, swerving and eventually crossing the center line.

Just as the ‘first or worst’ rule had helped her initially win the round, it then caused her to have to give up the win after the car crossed over the middle, which is considered the ‘worst’ offense of the two.

“We were pretty stoked going into the first round today. It was like a rematch of Seattle, going up against Force again. It seems like we keep getting matched up against each other,” said DeJoria.

“I was super focused and took my time getting in. I didn’t realize he had red lit or that I had even red lit. I was just focusing on getting down quick. Go means go! The car smoked the tires, and when I didn’t see him in the other lane, I just kept going and trying to get the car to hook up, but it never did.

I hadn’t seen the win lights come on and by the time I got the radio call to let off it because I had won, I was already in a sideways drift towards the center line and I ended up clipping the middle. It was a bummer to have that happen- we really needed that round win. It was the second time I have ever pedaled the car and I feel as though I did my best.

I was just trying to get to the finish line first. When you don’t see a car in the other lane, you just don’t know. I was trying to keep it straight, and it was unfortunate that we lost, but it was certainly a good learning experience for me.”

“Our next race is Indy, and I’m really looking forward to getting back out there. We know we have a fast car, and our team is doing a great job. Thankfully, my team is very tolerant of my rookie mistakes. It’s all part of the first-year learning curve.”