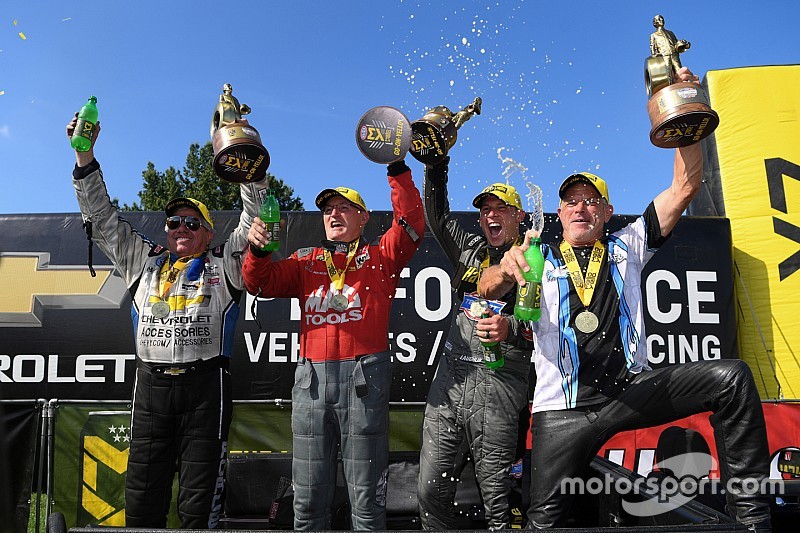 On the day he signed a new deal with Chevrolet, John Force tied Ed “Ace” McCulloch for the most Funny Car wins at Indy, powering his PEAK Chevrolet Performance Accessories Chevrolet Camaro SS to a run of 3.919-seconds at 324.44 mph to beat Jack Beckman’s 3.940 at 325.92 in the final round. It is Force’s second win in 2019, 151st in his career and first at Indy since 2002. The legendary driver beat Jonnie Lindberg, points leader Robert Hight and Matt Hagan to reach his first Indy final in five years, capping it off with the impressive victory.

“Racing is what I love to do and I love it so much. Winning Indy, it’s the biggest thing on my bucket list. I never thought I would get the chance again no matter how good I was. This was a big moment for me.”

Beckman, the No. 1 qualifier, beat Justin Schriefer, Bob Tasca III and defending series champion J.R. Todd to reach his fourth final round in 2019 and 60th in his career. He will start the Countdown to the Championship in fourth. Force will start from the second position trailing only John Force Racing teammate Hight.

He knocked off Clay Millican, No. 1 qualifier Brittany Force and Austin Prock to reach the finals, something he has done three previous times at Indy. In fact, he had the second-most career wins in NHRA history for a driver who had never won at Indy, but this time Kalitta pulled through, becoming the 30th different Top Fuel winner at the Big Go and also joining team owner Connie Kalitta as a U.S. Nationals winner.

“It’s incredible and I just can’t say enough for everyone working on my car today,” Kalitta said. “Having Connie in our corner was awesome and what a day. It was kind of ugly out there in the final and I thought it was over, but the win light came on. It’s great to be able to win a race that Connie won as well, so that’s cool.”

Torrence beat Wayne Newby, Shawn Reed and Antron Brown to reach his fourth final round this season. His strong day also gave him his first Mello Yello Countdown to the Championship berth, as he will start the playoffs in 10th. His son, Steve, will start from the No. 1 position as he looks to defend his championship, but Monday belonged to Kalitta, who will start the Countdown to the Championship in second as he seeks his first world title.

“I can’t say enough about everybody on my team and how hard we worked to win this thing,” Kalitta said. “The track conditions were incredible this weekend and the fans here are awesome. It hasn’t quite settled in that I won this thing yet, but it’s awesome. We’re looking forward to [the Countdown to the Championship] and we’re going to give it our best.”

Laughlin won for the first time in 2019 and at the U.S. Nationals, beating Elite Motorsports teammate Erica Enders in the final round with a 6.648 at 207.43 in his Havoline Camaro. Laughlin picked up wins against Steve Graham, Val Smeland and Deric Kramer to reach the final round, chasing down Enders to become the 25th different driver to win in Pro Stock at Indy. It’s also Laughlin’s first win in the class in more than two years.

“I just about choked up there, to be honest, but at the end of the day we got it done,” said Laughlin, who has three career Pro Stock wins. “It’s unbelievable. I’ve never even made the Countdown before and we’ve just made huge strides. It’s been a breakout season and I’m at a loss for words.”

Enders went to her second straight final round and 49th in her career by beating Richard Freeman, Greg Anderson and Jason Line, slowing to a 6.773 at 206.80 in the final round against Laughlin. Smeland clinched the final spot in the playoffs, earning his first career berth in the Countdown to the Championship. Laughlin, who is seeking his first world title, will start from second, behind only Bo Butner, who has been the points leader for all 12 Pro Stock races thus far in 2019.

Savoie claimed his second career win at Indy, going 6.851 at 195.25 in the final round on his Savoie’s Alligator Farm Suzuki to beat points leader Andrew Hines. It is Savoie’s 10th career victory and first this year. The veteran and former champ beat Ryan Oehler, Joey Gladstone and Eddie Krawiec to reach the final round, earning the victory after Hines went red. It led to an emotional celebration on the top end, as Savoie enjoyed the first win for a Suzuki in 2019.

Hines beat Kelly Clontz, Scotty Pollacheck and defending world champ Matt Smith to earn his eighth final round appearance in 2019 and 94th in his career. He’ll start the Countdown to the Championship as the points leader, while Savoie, who entered the weekend in 10th, jumped all the way to fifth with his winning weekend.

“The Suzukis have been struggling, but we’ve been working and it paid off,” Savoie said. “I held my composure and we were able to make some good runs. When Andrew throws up a red light, you better thank God for it because that doesn’t happen very often. I didn’t know if I would ever win another one. It’s not easy. But we’re going to go for it and see what happens. It’s an honor to get this second one (at Indy).”