Force win prompts thoughts of Medlen and the future 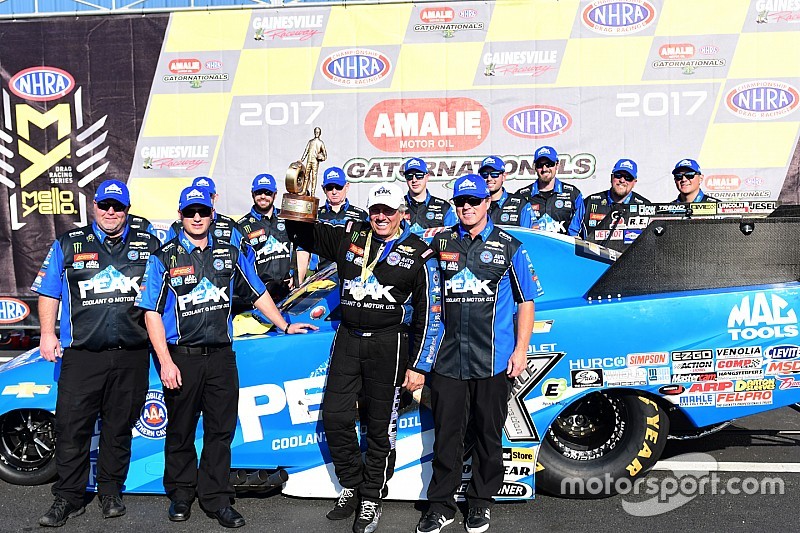 John Force scored an emotional 148th win on the 10th anniversary and at the same track as Eric Medlen's fateful crash, and JFR scored its 2500th round-win too. Anne Proffit reflects on an emotional weekend in Gainesville.

John Force has been bulldozing his way through NHRA Funny Car Mello Yello Drag Racing records since the mid-1980s, after earning his first round win in 1979. The 16-time champion’s actions on the racetrack actually do speak louder than his words, which is quite an accomplishment for drag racing’s motor-mouth.

This past weekend, during the third race of the 24-contest 2017 NHRA season, Force showed the world that, even at 67 (68 in May), he’s got the skills of a racer half his age. In earning his 148th Funny Car national victory, Force racked up his team’s 2,500th round win in the flopper category, a record that surely will be hard to beat. John Force accounts for more than 50 percent of those career round victories (1269) for the Brownsburg-based enterprise.

In gaining his 148th victory, Force raced his Peak Chevrolet Camaro SS from his 155th No. 1 qualifying position – seventh at Gainesville, Fla. – and earned his eighth victory in the Amalie Motor Oil Gatornationals. In all, he’s been to 13 Funny Car final rounds on the central Florida dragstrip.

He handily defeated 2015 champ Del Worsham in the first round, did the same with Jack Beckman in round 2, outran Tommy Johnson Jr. in the semifinals and earned the nod over nitro Funny Car first-timer Jonnie Lindberg, earning his first Wally trophy of 2017.

The Swedish rookie, reigning and two-time consecutive NHRA Top Alcohol Funny Car titleholder, races a Toyota Camry for Jim Head Racing, and defeated J.R. Todd, Force’s teammate and company president Robert Hight, and two-time 2017 winner Matt Hagan in order to attempt to defeat the 16-time champion in the finals. He was foiled by a much slower reaction time, but still, Lindberg’s ascension in his first career NHRA Mello Yello race was the talk of the paddock. It was Jim Head Racing’s first final round in more than two years.

But it was an emotional win for Force, since it came on a very important anniversary. Ten years earlier, at the same track, Force’s teammate and heir apparent, Eric Medlen, crashed heavily in a post-race Monday testing session. Medlen succumbed to his injuries a few days later, and the accident had wide-ranging consequences for the JFR team and for NHRA as a whole in much the same way as Dale Earnhardt’s death changed NASCAR after February 2001. Research and development by Medlen’s father John Medlen, currently tuning Beckman’s Don Schumacher Racing Dodge Charger R/T, has helped to make the class safer and the cars more durable. The number of drivers to walk away from traumatic shunts has increased incrementally with the updates promulgated by Medlen’s R&D.

John needed more than R&D work to keep him occupied as he reeled from the death of his son; he needed to run a car again, as he had when Eric was racing. When JFR had financial difficulties a few years back, John Force told members of his team to look for employment, as he wasn’t sure he’d be able to field a car for himself in 2015. Medlen found work with DSR tuning Beckman’s car, along with former JFR crew chief Jimmy Prock. Then when Prock returned to Force’s team for this season, Medlen considered also returning to the building where a statue of his son welcomes visitors and employees, but elected to stick with DSR.

Meanwhile, Prock’s second son Austin is being groomed to race Funny Cars in NHRA Mello Yello competition after a stellar open-wheel career. JFR is starting him in Super Comp, then on to Lucas Oil Top Alcohol Funny Cars and finally to nitro Funny Cars.

John Force, as he accounted for his team’s 2,500th round win noted, “It was the reign of terror that started it all, with Austin Coil, Bernie Fedderly and John Medlen. It was really about a group of guys - it wasn’t about me. I just wrote the checks, but I got to drive one of the baddest hot rods on the planet. We won just about everything.

“But those days are gone now. John Force wants to stay in the game, and now we’ve got Robert Hight, my daughter Courtney, and young Austin Prock is coming. I’m really excited about this. We put the band back together.

“Mick Jagger and the Rolling Stones said life’s a drag, but today, life’s not a drag - it’s a drag race and we won.”

Force is now reunited with Mike Neff, who tuned him to title No. 15, Jon Schaffer with whom he’s won seven Wally trophies and Jason McCulloch. All three are far younger than Force (Schaffer is still in his 20s) and have an equally young crew working with them. The future looks good for the old man.

John Force and his eponymous team have a weekend off before heading to Las Vegas and the fourth race of the 24-contest NHRA season. The Strip at Las Vegas Motor Speedway marks the spot where Force made his first race appearance in 2008 after his own, death-defying accident that occurred later the same season when he lost Eric Medlen. It’s also the site where Force claimed his most recent championship in 2013, in the penultimate race of the season and with Prock tuning his hot rod. The omens look good.