Ford NHRA Funny Car Drivers Race To 200: Who Will Be The One To Make History?

It’ll be every Pony for himself at Route 66 Raceway.

Since Tommy Grove’s win in 1967 at Bristol Dragway, the Ford Racing Funny Car team has been successful beyond what any of the original program designers could have hoped. Ford has racked up an incredible 199 wins – including 172 wins in the Mustang alone, the iconic model the “One Ford” NHRA Full Throttle Series stable of drivers have been racing to the winner’s circle in since Grove’s first victory. 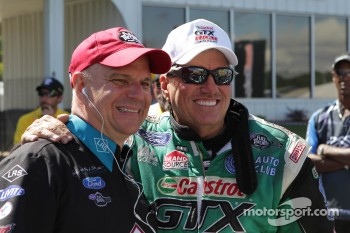 Ford’s “One Ford” approach to racing is well represented and well respected in the pits, with teams and drivers who compete on the track sharing information in a “rising tide lifts all boats” mindset – but the 200th win is something every Ford Funny Car driver will want to win for himself. Especially since the win will likely come as Ford Racing celebrates its 110th anniversary this year.

In one corner, we have the John Force Racing stable, home to not only John Force, Ford’s winningest driver with 69 victories, but also Robert Hight – No. 3 on the Win List with 22 and fresh off of earning John Force Racing’s 200th team Funny Car win. Mike Neff, who’s had an incredible return season as driver/tuner with three wins in six-final round appearances (of 10 races).

In another, you’ve got Bob Tasca III, who was literally born to drive a Ford. Tasca himself is a Ford dealer, now at the helm of the family dealership his late grandfather Bob Tasca Sr. founded. Not only is the business model Bob Sr. developed for the Ford Motor Company still held high as an example for others to follow, but he also convinced Ford to go drag racing – that Bob Tasca III should win Ford’s 200th could be argued as Divine Right as much as for the sake of a good story line.

Then you have fan favorite Tim Wilkerson. Respected as much for his kindness as he is for his driving and tuning abilities, Tim Wilkerson matches his crew members inch-for-inch in elbow grease as a driver/tuner for both his Levi, Ray and Shoup Mustang and that of his son, Dan, who will compete again at Indianapolis. Through the years, the elder Wilkerson has whittled and sometimes chopped away at his competition with the resolve only a true racer’s racer brings to the pit – and in Chicago, he will race in front of a hometown crowd led by “Wilk’s Warriors,” an enthusiastic fan base centered in Springfield, Ill.

If the win was an arm-wrestling match, that would be one thing, Tasca said. The others may have an advantage – like Hight, who says he would win. But on the track?

“This is an exciting week for Ford Racing, especially for the Mustang,” said Jamie Allison, Director of Motorsports, Ford North America. “The history of Mustang in Ford Funny Car racing stretches back to the beginning, the very first win. Some of the most prolific drivers in NHRA history contributed to this list. It’s amazing to be on the threshold of something as big as a 200th win for our program.”

The 200th Funny Car win is a milestone for both Ford and NHRA.

Among models in NHRA Funny Car, the Mustang, America’s Muscle Car whose racing DNA includes NHRA and NASCAR, has no rivals, according to longtime NHRA announcer Bob Frey.

Plenty of history has been written by NHRA drivers in Fords. The first female to win in Funny Car won in a Ford Mustang – Ashley Force Hood in Atlanta in 2008. She defeated another Mustang in the final round, driven by her father. The legendary team owner/driver Kenny Bernstein contributed 12 wins to the list. Tony Pedregon, who drove for Force Racing from 1996-2003, racked up 26 wins in a Ford – second only to the team owner he drove for.

Other drivers well-known in the annuls of NHRA history are on the list, including: Gary Densham (8); Mark Oswald (8) and Raymond Beadle (6). The late Eric Medlen, beloved for his quick smile and goofy sense of humor, also won six events for Ford. Whit Bazemore added another five…and the list goes on.

“Ford has been at the forefront of so many historical moments in NHRA's history,” said Gary Darcy, senior vice president of sales and marketing, NHRA. “You only have to look at the list to see how many big names and big moments have been celebrated with Fords in the winner's circle and how many special statistics have been earned by the Mustang, in particular. The 200th Funny Car win is a milestone for both Ford and NHRA.”