Ford Racing is celebrating its 110-year anniversary in 2011. To commemorate this historic season, Ford Racing is taking a look back at some of the great moments in our rich racing legacy. 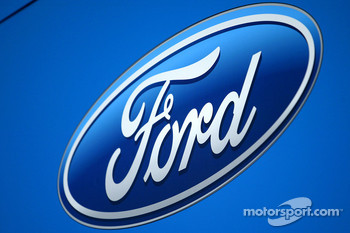 By: Joe Sherk and Dave Densmore

1. FORCE AND FORD STRIKE FEAR - When Pontiac released John Force from his contract early in 1997 in a dispute over race car bodies, Ford, at the behest of the late Bob Tasca Sr., leapt at the chance to sign the reigning NHRA Funny Car Champion. Tony Pedregon’s 1997 win at the O’Reilly Spring Nationals at Houston, Texas, was the first Ford success for John Force Racing, the first of 135 wins for JFR drivers in hybrid Ford Mustangs.

2. BOB GLIDDEN’S DOMINANCE - Although he would win nine of his 10 series titles in Fords, Bob Glidden’s most dominant season was the 1978 campaign in which he drove a Ford Fairmont to EVERY final round in the series (nine), earning seven victories and qualifying No. 1 eight times in nine events. In addition to a Pinto and the Fairmont, Glidden won in Thunderbirds, Probes and even an EXP.

3. FACTORY HOT RODS A GOOD FIT FOR FORD - Don Nicholson earned the first NHRA Pro Stock win for Ford at the 1971 Summernationals at Englishtown, N.J. That was followed by Bob Glidden’s win at the 1973 U.S. Nationals in a Ford Pinto and later by Wayne Gapp’s triumph at the same race in 1975 in a four-door Ford Maverick he campaigned with partner Jack Roush. Yeah, that Jack Roush.

4. FIRST FUNNY CAR WINS - Tom Grove earned the first of Ford’s 195 NHRA Funny Car victories when he prevailed in the 1967 Springnationals at Bristol, Tenn., although Ford’s signature victory in the category came two years later when Danny Ongais, who would go on to a career in open wheel racing, drove one of Mickey Thompson’s Mach I Mustangs to victory at the U.S. Nationals at Indianapolis, Ind. Ongais mowed down the field in drag racing’s biggest race in a blue Mustang using the 427 SOHC Ford for power. It would be the last victory for a pure Ford Funny Car until 2009.

6. THE 1968 FORD DRAG TEAM - With the factory endorsement of the 428 Cobra Jet, Ford showed up at Pomona for the 1968 Winternationals with eight Wimbledon White fastback Mustangs all equipped with the new engine package. The drivers were who’s who of the sport in the years immediately preceding the creation of the Pro Stock category: “Dyno Don” Nicholson, Gas Ronda, Al Joniec, Hubert Platt, Jerry Harvey, Carl Holbrook, Phil Bonner and Bill Ireland, each teamed with a performance-minded dealer ranging from Tasca Ford to Dick Brannan Ford to Rice Holman Ford to Russ Davis Ford to Paul Harvey Ford. The Cobra Jets totally dominated with Joniec beating Platt to win the SS/E class final and then besting Dave Wren and Mopar to claim Super Stock Eliminator.

7. MUSCLE CAR DOMINANCE - Bob Tasca Sr. lead Ford to the forefront of the muscle car era with “win on Sunday, sell on Monday” philosophy. Through Tasca Ford, his Rhode Island dealership, Bob Tasca Sr., in collaboration with driver Bill Lawton and chief mechanic John Healey, almost singlehandedly put Ford on the drag racing map. Starting with the Thunderbolt, Lawton, Tasca and Healy were a dominant team. In fact, Lawton won the 1965 Winternationals at Pomona, Calif., in the new Factory Stock class with an A/FX Mustang. However, Tasca’s biggest contribution to the High Performance Era was the creation of what would become the Cobra Jet engine package. Swapping a 428 short block for a wounded 390, Tasca’s technicians added 427 Low Riser cylinder heads and a 735 Holley carburetor to create what the called the KR-8, KR for “King of the Road” and 8 for the ultimate goal of covering the quarter mile in less than nine seconds. Tasca’s team also was one of the first to alter the wheelbase on its Thunderbolt to improve the weight transfer, making it a forerunner of the modern Funny Car. 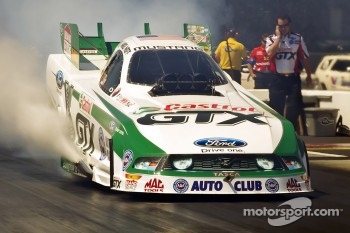 8. OUT OF THE ASHES - Following the death of Eric Medlen in a testing accident in March, 2007, and after a crash six months later almost ended John Force’s career, Ford took the lead in a safety initiative that included the re-design of the basic Funny Car. Moreover, Ford provided to Top Fuel and Funny Car teams, at no cost, “blue box” data recorders similar to the black boxes in commercial aircraft.

9. TOP FUEL SUCCESS - Although the bulk of its success has come in the Pro Stock and Funny Car classes, Ford is not without victories in drag racing’s ultimate class, Top Fuel. Connie Kalitta and Don Prudhomme, both earned 1966 NHRA victories in dragsters powered by supercharged versions of Ford’s 427 SOHC engine running on nitromethane fuel. Kalitta drove his “Bounty Hunter” entry into the winners’ circle at the season-opening Winternationals at Pomona, Calif., while Prudhomme prevailed at the Springnationals at Bristol, Tenn., in Carroll Shelby’s “Super Snake” entry powered by the same engine.

10. THE BOSS IS BACK - When Mike Neff won the 2009 Auto Club Finals at Pomona, Calif., in a John Force Racing Mustang, it was the first win for the BOSS 500 Ford engine and the first Funny Car win for a Ford-powered, Ford bodied Funny Car since Danny Ongais won the 1969 U.S. Nationals, a span of 40 years.