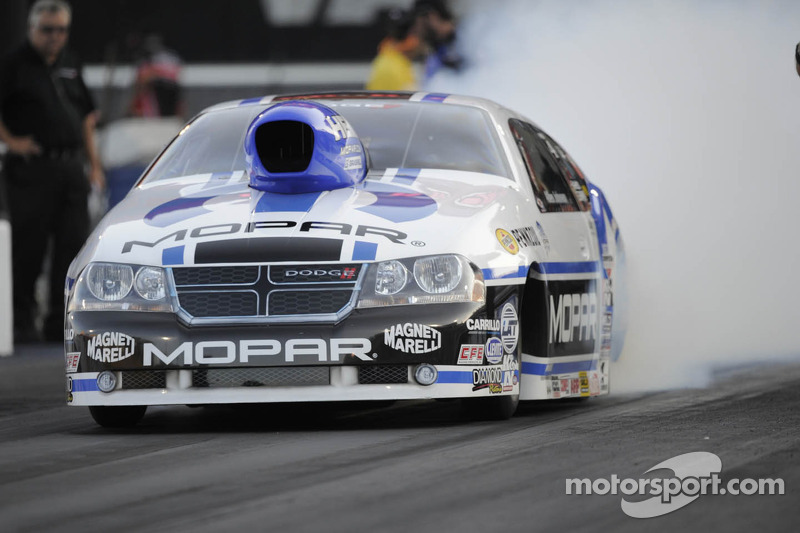 There were some changes in Top Fuel, but certainly not at the top of the grid, where Doug Kalitta picked up the No. 1 position ahead of Kalitta Motorsports teammate David Grubnic with his Friday night lap of the 1000-foot dragstrip of 3.785 seconds at 324.12 mph. Tony Schumacher retained third place despite two less than stellar runs and Spencer Massey was joined by Shawn Langdon as both drivers passed Antron Brown to take fourth and fifth places, respectively. 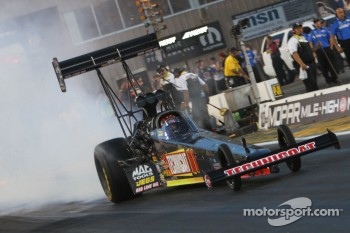 "It's cool seeing David and I in first and second," Kalitta said. "I'm really excited for Jim (Oberhofer, crew chief) and all the guys. It got pretty warm today - like the conditions on Sunday. We dropped a cylinder on the second round and that slowed us down," he explained. "We ran for the conditions of the day." Kalitta and Grubnic were No. 1 and 2 in 2004, with Kalitta, who has five Top Fuel wins at Sonoma taking the win that year.

Cruz Pedregon's Toyota Camry helped him earn his first Sonoma No. 1 today and his 49th career top qualifying mark, using his 4.028-second pass at 307.30-mph on Friday night to beat out point leader Jack Beckman (Dodge Charger ), who also set his quick lap on Friday night at 4.042 seconds at 311.70. Ron Capps (Dodge) is third and owns the other half of the track record with his speed of 317.57. Jeff Arend (Toyota), Courtney Force (Ford Mustang), Johnny Gray's Dodge, the Toyota of Alexis DeJoria and Bob Tasca III (Ford) took over the balance of the front half of the field.

"Today was a good indicator of what we can expect on Sunday," Pedregon said. "We were fourth in the early session despite dropping a cylinder and I feel good about tomorrow." While he's not terribly happy with his current win/loss record on race days, "Tomorrow is a crucial day to lock up a spot in the Countdown. I went down the track three of four times, the car is fast but we have to be smart and not beat ourselves. I just want to get over the hump of [not] getting to the finals," he said.

No one in Pro Stock was able to beat Allen Johnson's Saturday time of 6.517 seconds (at 212.09 mph) in his Mopar Dodge Intrepid, set in the last qualifying session for his fifth straight No. 1 this year. Mike Edwards is second with his GXP's Friday night time of 6.527 seconds, while Erica Enders' GXP moved to third, Jason Line is fourth in the Summit Racing Camaro, followed by Vincent Nobile (Dodge), Greg Anderson (Camaro), V Gaines (Dodge) and Warren Johnson (GXP) taking over the top half of the field.

If you had any doubt, this season pretty much belongs to the Harley-Davidson Screamin' Eagles in Pro Stock Motorcycle. Eddie Krawiec retained top spot - but was unable to hit the magic 200-mph barrier he so desires to break. His 6.801-second track record pass down the quarter-mile at 198.35 mph beat teammate Andrew Hines' 6.848/195.28. Hector Arana Jr is third, followed by his father Hector - both riding Buells, while Karen Stoffer holds fifth on her Suzuki, Matt Smith is sixth on his Buell, Jerry Savoie is back in the top half of the field on his Suzuki Hayabusa, followed by Michael Ray's Buell.

The balance of the Pro Stock Motorcycle field are John Hall, Scotty Pollacheck and Shawn Gann, all riding Buell bikes, with MIchael Phillips, Steve Johnson and Ktie Sullivan on Suzukis. Matt Guidera and Angie Smith round out the sweet 16 on their Buell motorcycles, while James Surber (Buell), Charlie Sullivan and Freddie Camarena (Suzuki) failed to qualify.

Another victory by either Hines or Krawiec on Sunday will give Harley-Davidson 10 wins in a row, dating back to 2011. The pair haven't taken every No. 1 this year but they have collected every single Wally trophy so far in the Pro Stock Motorcycle season.

Courtney Force tops for JFR on Friday at Sonoma